Get ready for another interesting day, folks! USO collapsing? It’s a high-volume ETP with 100MM shares of average daily volume over the last three months.

US stocks (SPY, DIA, QQQ, IWM) are set for a lower open. Spot VIX is tracking up into the high forties. Both Asian (AAXJ, EWJ) and European bourses (VGK, EWG, EWU) have headed into retreat mode, with major indexes down between one and four percent in Tuesday trade.

Thank you, thumbsoup, for adding a resource that may interest those of us who want to get some sense of how the CARES package may be altering incentives for employers and employees (see the link). I recommend that readers check it out, and add your own thoughts and interesting reading material on the topic for that matter.

The CARES Act is rather stunning in terms of its speed, size, and comprehensiveness. In some ways, that is exactly what in theory we’d like in a fiscal stimulus package. And no legislation for a nation as large and diverse as the US is going to fit every circumstance. I myself get concerned that, in keeping with thumbsoup’s comments above, the benefits may need to be extended into the future, which in turn hints at an exploding fiscal deficit. As a one-and-done solution to the existing crisis, however, I believe the stimulus targets the predictable issue in demand destruction; let’s just hope that the optics and incentives don’t turn into a perverter of supply. 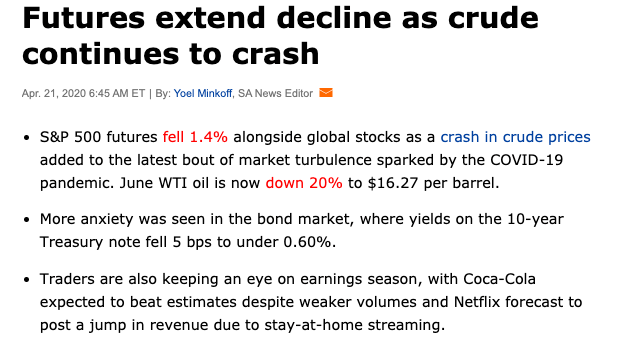 …and that was a couple hours ago. Now the June contract is down just shy of 32% to a crushing level of $13.98/barrel. Plenty of time and liquidity left on that contract. Even the July and August contracts are down over $3/barrel, at least as I write this.

Black gold has often been called the life blood of the global economy. It is certainly possible that animal spirits have gone into extreme reverse, and unbridled irrational fear has taken hold on this market.

But we also need to consider that other risk assets may be way out in front of their skis in terms of calling the turnaround. If we’re all going to be back to work and our regular spending patterns, wouldn’t oil be rebounding? This especially after OPEC’s landmark agreement to pull record supply.

For those looking to take advantage of the panic, I have a couple thoughts to share: 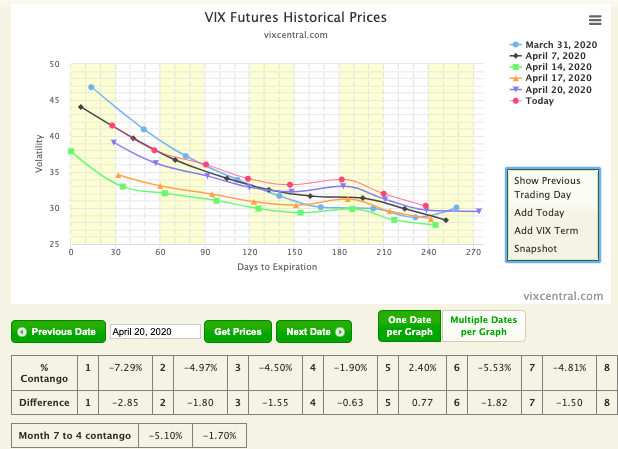 At the 180-day mark, today’s term structure is as high as it’s been over the comparative term structures that I am featuring, which go back to close of trade, March 31.

The VX1 has perked in the early part of today’s session. The fact that Asian and European markets were sympathetic to the poor close in the US markets yesterday, when coupled with the demise of the Jun CL contract this morning, leads me to believe that the upward-bound action in the near-dated contracts has plenty of room for follow through. I don’t always side with momentum, but I think the case is pretty darn decent here (VXX). 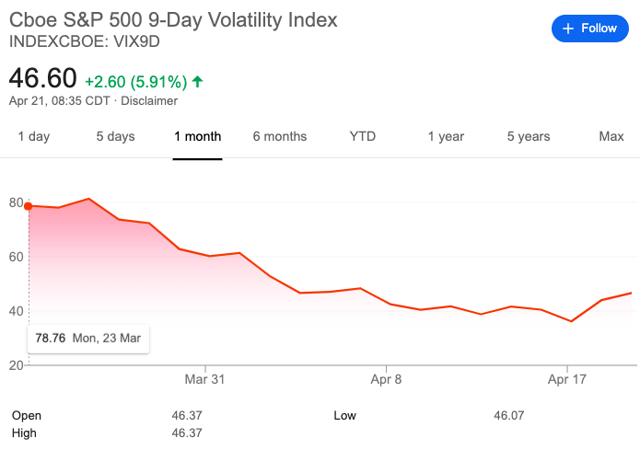 That said, the more sensitive VIX9D metric is not flying off to the moon this morning. Up, sure. And 46 vol points leaves all kinds of room for interesting movement in the SPX. But this short-dated version of the VIX can truly fly or tumble in breathtaking fashion, and that’s not what we’re seeing, at least not so far. So while I’d say that vol longs appear to have grabbed the tape for the time being, not all metrics are exactly screaming for follow through. Also, it is worthwhile to comment here that many sectors are actually benefitted by low oil prices, and by now the energy sector only makes up about 3% (less actually) of the broader S&P.

If this is your first time reading Market Volatility Bulletin, thanks for giving it a try. If you’re a regular, I thank you for your ongoing contributions in the comments section.