On Wednesday, April 22, 2020, midstream giant Kinder Morgan, Inc. (KMI) announced its first-quarter 2020 earnings results. At first glance, these results were quite disappointing as the company failed to meet the expectations of its analysts either in terms of top-line revenues or bottom-line earnings. The company also did deliver on its promised dividend increase, but it was unfortunately smaller than we expected to see. A closer look at the actual earnings report also results in us being disappointed, but there were some bright spots here. The company continued to progress on some of its major growth projects and its natural gas division performed admirably, but it was also forced to cut back on some of its other projects due to declining economic fundamentals in the current market environment. We do certainly see the low oil prices negatively impacting the company here, but overall its earnings held up surprisingly well.

It seems essentially certain that the first thing that anyone reviewing these highlights is likely to notice is that essentially every measure of financial performance declined compared to the prior year quarter. This would seem run contrary to the numerous statements that I and many other analysts have made about Kinder Morgan being relatively insulated from commodity price fluctuations. However, Kinder Morgan is not like other midstream companies because it does actually produce natural resources itself. The company’s CO2 unit produces around 50,000 barrels of oil per day in the Permian basin so this would naturally expose the company to some commodity price fluctuations. With that said though, the company has hedged some of its production from its fields at much higher prices than today:

This should help ensure that the company’s oil production revenues do not fall as much as they otherwise would have given the recent plummet in oil prices to historic lows. However, we can clearly see that the hedges do not cover all of Kinder Morgan’s production so it still saw decreased performance from this business segment due to that portion of its production that is unhedged. In response to this, the company reduced its production by 6% so that its hedges cover a greater proportion of its production, which allowed it to actually increase its average realized price from $48.67 per barrel last year to $54.61 per barrel in the most recent quarter. This was not the case for the company’s natural gas liquids production, however, as that resource saw its average realized price drop by 24% year-over-year. This would naturally cause the unit’s financial performance to decline.

In August 2019, Kinder Morgan entered into an agreement with Pembina Pipeline (PBA) to sell the U.S. portion of the Cochin pipeline as well as its 70% stake in Kinder Morgan Canada. The company consummated this agreement in December. This had a negative impact on the company’s reported results as well because these business units still would have contributed to the company’s revenues and cash flows in the first quarter of last year but obviously they could not in the most recent quarter because Kinder Morgan did not own them.

Other than these factors, the company’s business held up admirably in the face of the COVID-19 pandemic. The company saw an 8% increase in volumes of natural gas moving through its pipelines and a 9% increase in crude volumes moving through its pipeline network year-over-year. These increase came in spite of the severe decline in commodity prices that we saw during March, which has begun to negatively impact upstream drilling activity. This is emblematic of the company’s business strategy, which has enabled it to generally maintain steady cash flows regardless of movements in commodity prices:

This is mostly due to the fact that Kinder Morgan’s cash flows are much more dependent on the volume of resources that it handles and not on the price of those resources. This is why the company’s business model is frequently described as a “toll road.” With that said though, the company’s natural gas pipelines unit did see its financial performance decline slightly compared to the year-ago quarter despite volumes being up by 8%. This was mostly due to the already discussed sale of the Cochin pipeline, and if we exclude this, then the unit’s financial performance was basically flat year-over-year.

The steep decline in oil prices is proving to be a very real problem for upstream shale producers. The current environment is quite literally unprecedented. As of the time of writing, West Texas Intermediate crude oil trades at $17.40 per barrel, which represents a 71.50% decline over the $61.06 per barrel that it traded at on January 2, 2020:

As I discussed in a previous article, shale oil producers were in aggregate having a difficult time being cash flow positive even when oil prices were much higher than today. The industry as a whole has essentially been a destroyer of capital over the past decade. Thus, we can conclude that it is essentially impossible for it to make money with prices at today’s levels. Upstream companies have apparently recognized this and have cut their planned capital expenditures by more than $17 billion. As a result, some of the projects that Kinder Morgan was working on to provide takeaway service to the Permian basin no longer appear to be needed. In response to this, Kinder Morgan has reduced its capital expenditures by approximately $700 million in 2020, reducing the $2.4 billion that it originally planned to spend this year. It is possible that this is merely a postponement of these projects and not a cancellation but the company did not specify this. In such a case, Kinder Morgan will resume work on them once industry conditions become more favorable, much like DCP Midstream (DCP) is doing.

Despite this reduction in planned spending, Kinder Morgan has not completely given up its growth ambitions. As of today, the company has approximately $3.3 billion worth of projects under construction: 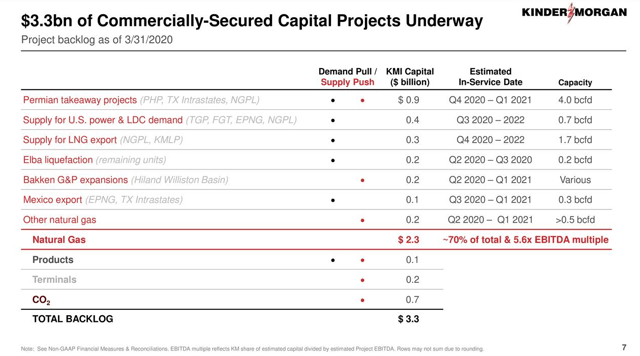 As we can see, the company has numerous projects under construction that are scheduled to come online over the 2020 to 2022 period. These projects should serve as a growth engine for the company over the period. One thing that we do note though is that there are no oil pipeline projects in this list as there were every other time that we have looked at Kinder Morgan’s growth projects. This is because oil drillers have been affected much more by the downturn in energy prices than natural gas producers have. As a result, natural gas producers have not really had to cut back on their growth ambitions to the same degree as oil producers so Kinder Morgan’s natural gas projects are still needed.

One concern that many investors have regarding Kinder Morgan and other midstream companies is that the low oil price environment will cause its customers to go bankrupt. A bankrupt company can easily break its contracts with Kinder Morgan, and even if it cannot, it might not be able to make its payments under the contract anyway. As such, we want to look at the characteristics of Kinder Morgan’s customer base. Fortunately, we can see a lot to like here. Here is its customer breakdown:

As we can see here, approximately 70% of the company’s customers are actually end-users of the resources that Kinder Morgan transports. This is a nice thing to see as these companies actually benefit when energy prices decline. Thus, they are somewhat unlikely to default on their contracts with Kinder Morgan since the lower prices translate into higher margins for them. In addition, another 9% of its revenues come from companies that make their money off of a spread between wholesale and retail energy prices so these companies are unaffected much by a decline in energy prices.

Another thing that we can see here is that the overwhelming majority of the company’s customers are investment-grade, well-financed companies with strong balance sheets. These companies are much better positioned to weather the recession that will be invariably following the final lifting of the COVID-19 quarantine than weaker junk-grade companies. Thus, we can conclude that the company will probably only see a relatively minor impact even if shale companies start going bankrupt. We see further evidence of the strength of Kinder Morgan’s customer base in the fact that the wave of bankruptcies that hit U.S. shale companies in 2016 only reduced the company’s distributable cash flow by $10 million.

In conclusion, this was overall a very decent quarter for Kinder Morgan despite some of the fear that the market has expressed over the company due to the steep decline in oil prices. Kinder Morgan appears to be reasonably positioned to weather this market. The company continues to have some growth potential in the natural gas space, despite the across-the-board declines in energy prices, which is nice as those companies are holding up much better than oil shale producers. Kinder Morgan’s cash flows also appear to be reasonably safe due to its customer base. Overall, these results look much better than what the market expected from this company.