J.B. Hunt Transport Services (NASDAQ:JBHT) has been on my radar for many years. This transportation giant is a great tool to track the domestic economy as its stock price follows leading economic indicators. The just-released first-quarter results show a mix of both strong revenues and weak margins as rapidly rising sales were more than offset by lower margins – resulting in, once again, a lower bottom line. Regardless, investors did expect this to happen, and the stock has not done anything crazy. The performance is comparable to the S&P 500 performance as traders started to price in the COVID-19 impact, which was not visible in the Q1 results. All things considered, I consider J.B. Hunt to be a great tool to trade the next recovery. The only problem is the amount of uncertainty regarding COVID-19 and its effects on the economy.

This is the first article since the start of COVID-19 that contains leading indicators. And by ‘start’, I mean the point when things started to escalate at the end of February 2020. Since then, there has been a tremendous focus on efforts to flatten the curve, resulting in an economic lockdown in pretty much all industrial countries. As a result, I did not discuss my leading indicators anymore as it simply did not matter. Everyone knew they would be coming in terrible, and absolutely nobody was able to predict how bad things could get.

The graph below shows how bad things have gotten. The red line displays a number of regional manufacturing surveys. These surveys are not complete as most of them are published towards the end of each month. Either way, it’s still valid as most have the same pattern anyway. What we see is that April has seen a further downward acceleration from March levels. At this point, surveys are indicating a potential ISM manufacturing index decline to 2008 levels (slightly above 30). 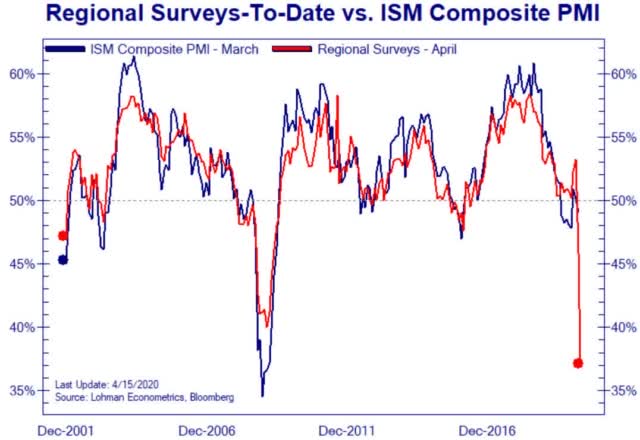 As a result, it is 100% certain that coincident indicators like industrial production will continue to implode. It also means that stocks have more downside as a decline to these levels is not yet priced in. Without looking at J.B. Hunt’s results, this means that the stock is not a good buy as a trade at current levels as the macroeconomic risk/reward is weak. However, there are plenty of reasons to monitor the stock to buy once leading indicators start to improve.

Here’s What Happened In Q1

Let’s start by mentioning the bad news. Once again, the company failed to grow its bottom line as earnings per share reached $0.98. This is 10% below the prior-year quarter, but in line with expectations of $0.97.

The good news is that J.B. Hunt generated sales worth $2.28 billion. This is 9% higher compared to the prior-year quarter. The biggest segment, intermodal, saw a sales improvement of 6% to $1.15 billion. Dedicated contract services saw a sales boost of 10% to $542 million, while integrated capacity solutions rose 12% to $335 million. Final mile services saw an improvement of 39% to $154 million with truckload reporting the smallest increase of 3% to $105 million.

Overall, these gains were the result of higher intermodal volumes, strong utilization, and increased transportation efficiencies in an economy that still allowed companies to grow their business – hence, transportation demand overall was significantly higher.

Unfortunately, margins were pressured by business expenses like building a digital platform and investments in employees, technology and the business platform, in general. As the graph below shows, operating margins have been in a long-term downtrend after peaking in 2015. Back then, margins were pressured by a rapidly slowing (global) economy. Even though the economy recovered in 2016 and 2017, margins continued to decline as wages and related input costs started to rise. 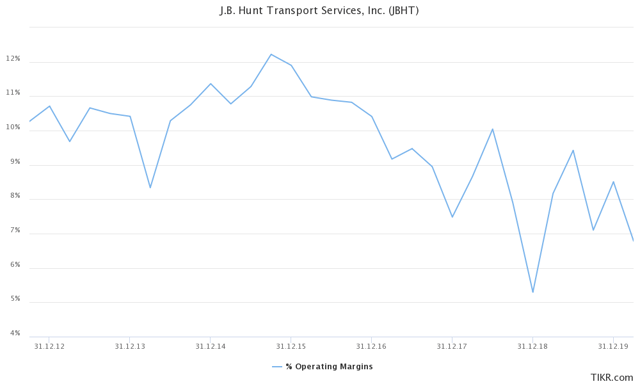 Given the current impact of COVID-19, it is impossible to say where economic growth is headed. Sure, the trend is down, and everyone knows that the second quarter is going to be a disaster. However, the question remains whether Q3 is going to see a V-shaped recovery. Right now, this is dependent on the end date of the lockdown in major business regions and the question if spending will indeed quickly rebound. With this in mind, it’s a good thing that J.B. Hunt has a very solid balance sheet. Below, I made an overview of several ratios that I monitor when I assess financial stability. First of all, the company’s total liabilities are with 57.6% of total assets. As a stand-alone number, this is a solid number. However, the trend has been down as total liabilities were valued at roughly 65% of total assets just four years ago. Additionally, the company maintains a healthy liquidity ratio. In this case, total current assets cover 154% of current liabilities (current ratio). The company also covers interest expenses more than 12x with its EBIT. 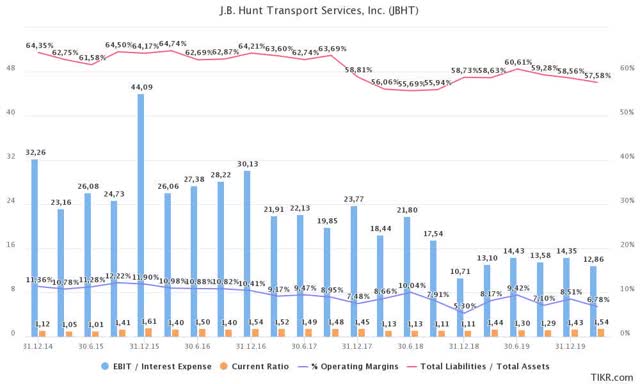 The graph below has two purposes. The first purpose is to show you how well the company has recovered from its 2020 lows. While I am writing this, the stock is up 40% from its lows and down just 14% from its December 2019 highs. The blue line displays the ratio between transportation stocks (IYR) and the Dow Jones Industrial (DIA). As you can see, relative strength is absolutely terrible as the ratio has hit a new low after a brief attempt to recover last week. Generally speaking, this is a bad sign. Yes, transportation stocks have been underperforming since 2014 (just like J.B. Hunt’s margins), but the recent steep decline and failure to recover is a clear sign that things are not fundamentally starting to improve.

As much as I respect J.B. Hunt’s management and its efforts to turn the company around with new strategic investments, I am convinced that now is not the right time to buy. The recent surge has made the risk/reward unattractive, and the ongoing economic decline could seriously hurt the stock over the next few weeks.

I will stick to a few dividend stocks (see my Seeking Alpha bio) and bonds. I recently bought 7-10 year government bonds. I used the Euronext listed version of the iShares US Government Bonds 7-10 year ETF (IEF). In the disclaimer, you will see that I mention being long IEF. However, the Euronext listed ETF has a slightly different ticker (BTMA.AS) but is equal to IEF in euros.

I will start buying J.B. Hunt as soon as there are clear signs that economic growth is returning. Buying right now is too much of a gamble, in my opinion.

Thank you very much for reading my article. Feel free to click on the “Like” button and don’t forget to share your opinion in the comment section down below! My long-term investments are stated in my Seeking Alpha biography.

Disclosure: I am/we are long IEF. I wrote this article myself, and it expresses my own opinions. I am not receiving compensation for it (other than from Seeking Alpha). I have no business relationship with any company whose stock is mentioned in this article.

Additional disclosure: This article serves the sole purpose of adding value to the research process. Always take care of your own risk management and asset allocation.