The primary theme that our articles focus on is risk.

It is our observation that too many investors chase returns without ever properly considering risk. Risk-adjusted returns are far more important than returns observed in a vacuum.

We have always been intrigued by the equal weight and low volatility versions of various indices. We’ve often wondered if these would perform better in exactly the kind of circumstances we’ve witnessed over the past month.

Volatility is effectively equivalent to risk. If a security’s price never changes, and it maintains its value, it has no risk. The more it changes, the more risk it holds.

What we saw over the past month in our targeted alternative-weighted ETFs is that they did not perform nearly as well as we had hoped.

Let’s take a look at how they did.

Now, we would expect the alternative ETF allocation strategies not to perform on the upside as well as their cap-weighted peers. The FANG stocks and momentum plays are the largest market cap plays in the index and also have the most volatility.

However, we would expect them to do better on the downside.

However, looking at this five-year comparison chart, we are shocked to discover that the equal weight index gave up virtually all of its gains over the past five years, settling in at a gain of just 3.42%, far below its peers.

However, in just the past month, the same outcome applies, in which the equal weight index fell considerably more. (Chart from Yahoo Finance)

Let’s compare these results with risk-adjusted returns from Morningstar, which include the big decline:

SPY has an average annualized return of 6.8% over the past five years with a 5-year standard deviation of 16.5.

SPLV has an average annualized return of 7.15% over the past five years with a 5-year standard deviation of 10.36.

RSP has an average annualized return of 2.76% over the past five years with a 5-year standard deviation of 13.08.

SPLV has seen a slightly better return with much less volatility, and did not perform much worse at all compared to SPY. RSP, however, returned less and had more volatility than SPLV. During the decline, it was decimated. In this case, sticking with SPLV is not unwarranted. Given the substantially lower volatility, we prefer it.

This time, the low volatility version did quite well compared to the cap-weighted peer over the long term, while the equal weight version got crushed in both good times and bad.

The five year chart shows the low volatility version as the clear winner in total return (courtesy of Yahoo):

The one-month chart shows that all three performed about the same, although the cap-weighted version held up a bit better (courtesy of Yahoo): 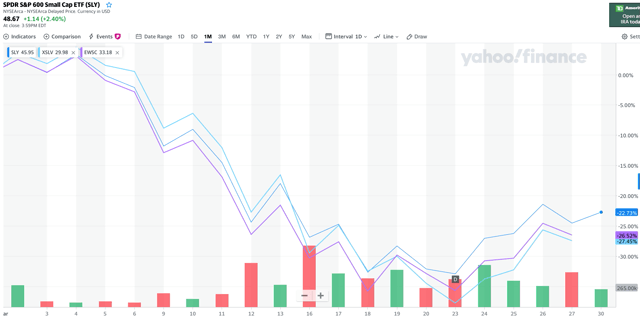 Seems like a strange thing that the results should diverge. So let’s look at the volatility data from Morningstar.

SLY has an average annualized return of 0.3% over the past five years with a 5-year standard deviation of 12.32.

XSLV has an average annualized return of 1.97% over the past five years with a 5-year standard deviation of 13.31.

EWSC has an average annualized return of -3.72% over the past five years with a 5-year standard deviation of 18.47.

The so-called “low volatility” version isn’t so low after all. Its volatility is actually higher than the cap-weighted index. That explains the divergence of outperformance over the long term and weaker performance on the downside.

See how we were tricked?

There are a few indices that have low-volatility choices available. What we’ve learned in looking at just two of them is that 1) you must examine the data carefully to see if the ETFs are what they say they are, and 2) if the alternatives perform as expected.

What we did learn is that, based on these cases, equal-weight indices are poor choices. They are higher in volatility and provide weaker performance.

The safest bet is to go with cap-weighted indices, but look into the low-volatility options, confirm they are what they say they are, then compare.