Bitcoin USD (BTC-USD) hardly requires an introduction. The crypto asset has made regular headlines in the news in the past years, as the price of the asset fluctuated strongly.

In this article, we will present a classic trend-following strategy in which the buy & sell signals will be generated automatically by a set of predetermined rules. We will execute a number of backtests to see whether such a strategy can be beneficial for investors/traders/speculators who would consider investing in Bitcoin.

After these backtests have been executed, we will execute an out-of-sample test to see whether the results would have sustained throughout 2020.

Investing in Bitcoin is not for the faint of heart. If one would have started purchasing Bitcoins back in 2014, you would have gone through a spectacular uprise, only to see the value of your cryptocurrency come back strongly in value just as quickly.

The investment would have slowly appreciated from 2014 to 2016 before it started to increase exponentially in 2017-2018. After this, the value of the cryptocurrency crashed down only to rise again thereafter.

A simple buy-and-hold strategy in which one would have purchased Bitcoin for $10,000 on the start date (17 September 2014) and would have held the investment until today (9 April 2020) would have had the following equity chart 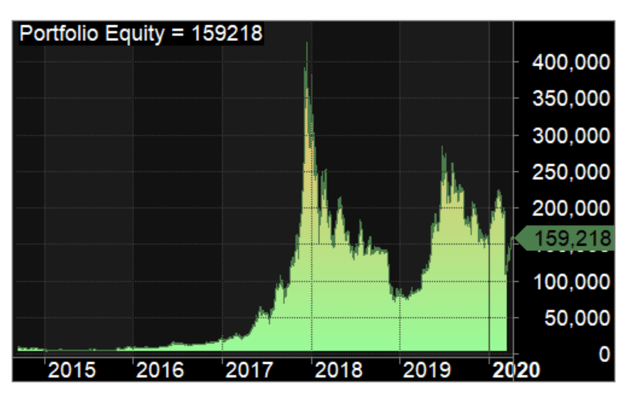 The returns on a month-to-month basis would have fluctuated substantially as well, sometimes going up with 63% only to decline later with 33%.

In the chart below the underwater equity is demonstrated, showing to losses one would have endured by holding BTC in the portfolio throughout the past years 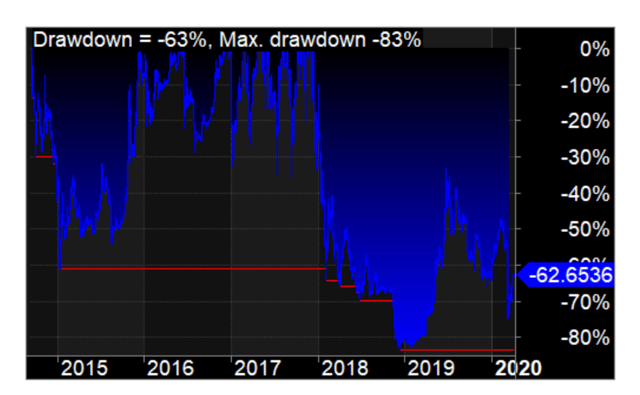 That’s right, the maximum drawdown (the biggest decline from top to bottom) would have been 83%. If you would have been unlucky enough to have purchased BTC at the top and face this 83% loss, you would need a price appreciation of approximately 488% just to get back to even.

Conclusion: It is clear at this point BTC is able to appreciate strongly in price and decline just as fast again. Looking at the underwater equity chart, showing the 83% price decline, we assume this price volatility is too elevated for most investors to accept.

In the section here below, we will backtest a classic trend-following strategy that has been frequently mentioned for commodity and stock investments. We will validate whether this strategy holds any merit for speculators/traders who want to risk part of their equity in Bitcoin.

The strategy we will use to time our entries & exits signals will be a moving average crossover system. In total 4 trading systems will be backtested:

The goal of the Strategy

The main target of this experiment is to run a number of trading simulations to come forward with a trading strategy which can benefit from the upward momentum of BTC, while the downside risk is reduced.

The results of the buy & hold strategy can be summarized as follows:

In order to establish a yardstick to measure the downside risk of the investment, we will look at the total drawdown during the investment (“Max Sys DD”). The lower, the better. 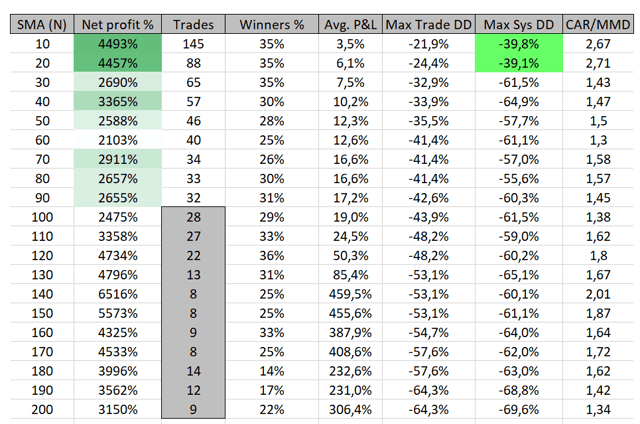 From this table we can see the following:

In this strategy we do exactly the same as under Strategy 1, only now will we use an exponential moving average in which the more recent price data will have a larger impact on the calculation of the moving average.

The results can be found in the table here below 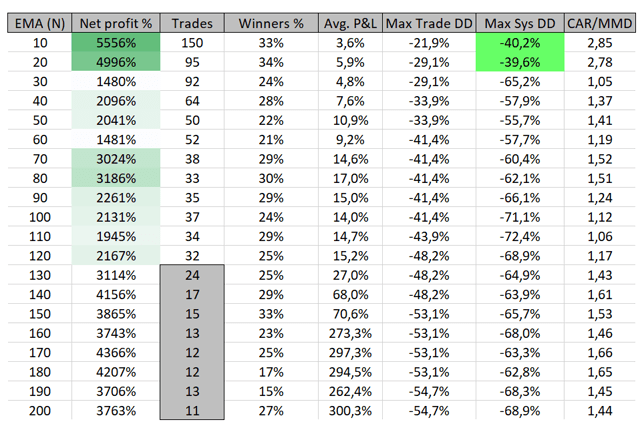 The main findings are similar to those of Strategy 1:

The results can be found in the table here below. This time I have sorted the results based on the number of trades the backtest generated (the top 20 is shown):

That’s right, only 4 backtests resulted in more than 30 trades. The results are rather poor, the maximum drawdown is still high and the total net profit % is poor compared with the same results from strategy 1 & 2. We are not going to investigate this strategy further at this point, as the number of trades generated is just too limited to be taken seriously.

We can be short here, the results are very similar to the ones under Strategy 3:

No need to further investigate Strategy 4 (nor Strategy 3), due to a lack of sufficient generated trades.

Out of Sample Testing

We will now have a look at how the trading strategies would have performed in 2020.

From the results discussed here above, it would have made sense to use a simple/exponential moving average crossover system to generate trades on Bitcoin, ideally only using 10 or 20 days to calculate the moving average.

In the table below we will see how the moving average strategies would have done in 2020:

If we would have used the EMA crossover system with a parameter of 20 days in the year 2020, the following trades would have been generated:

This is what you would have gotten following the buy & hold strategy (you bought Bitcoin on 1 January 2020 and sold it on 9 April 2020):

– Even though the timeframe was rather short (only 3 months and a few days), both trading systems generated a number of signals which could have been easily executed at the opening price of the next day.

Remark: Please keep in mind any investment in Bitcoin is exposed to a high degree of risk. While the strategies presented in this article demonstrate a method to lower the risk exposure, anyone investing in Bitcoin should always take the high-risk character of any cryptocurrency into consideration.