I want to answer a simple question: What is Facebook (FB) worth in 2020?

This is an absurd year. The current situation has complicated the economics of operating a digital platform. Facebook, for better or worse, operates some of the largest and most popular digital platforms ever known. So what is the impact on its financials and what is the stock worth today?

While there’s plenty of controversy here, ranging from the political risks to the reliability of user statistics, I want to focus on two key dimensions – costs and revenue – to inform my valuation of the company.

Every aspect of Facebook’s operation is about to get more expensive in 2020.

Obviously, usage is up. Last month, messaging surged over 50% in countries that were hit hard by the virus. Video and voice calls on WhatsApp more than doubled. Influencers stuck at home are now leveraging Facebook Live more than ever before, while everyone has more time to create and share content as they self isolate. This surge in activity could be sustained for the duration of the lockdown, which is completely unknowable at this stage. Server and procession costs, of course, will rise in tandem.

Meanwhile, Facebook has clearly said it isn’t planning layoffs. In fact, the company plans to hire 10,000 additional staff this year in its product and engineering teams. The median Facebook employee is already better paid than most of Silicon Valley. The company plans to release annual bonuses early and add an extra $1,000 on top to compensate its full-time employees. However, that $45 million bonus is a drop in the bucket for a company as large as Facebook. As is the $100 million relief fund for small- and medium-sized businesses it announced recently. 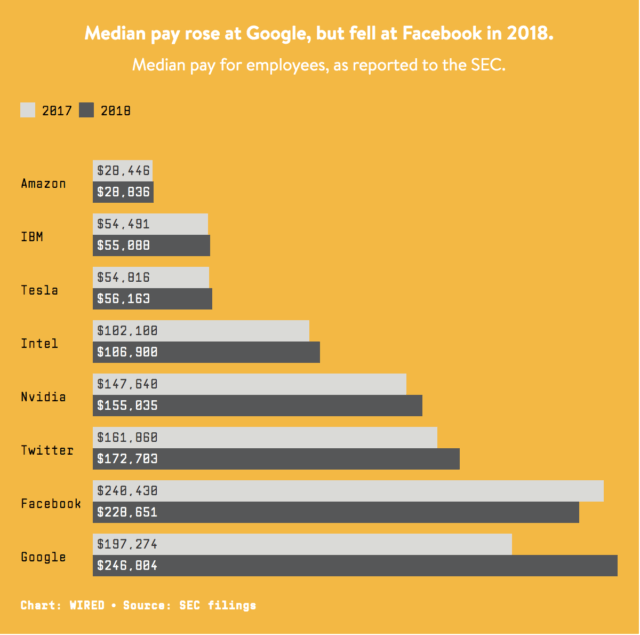 Altogether, Facebook reported $46.7 billion in operational costs in 2019. Those expenses are split into four categories. Here’s how those four categories could shape up in 2020:

Effectively, Facebook’s costs could rise by about 17% under these conditions. The company also reported $15.65 billion in CapEx in 2019. Assuming the company might have to expand its server farms and storage capabilities, I’ll add another $1 billion to this.

A 17% rise in costs isn’t really a crisis for a fully-funded company like Facebook. However, I believe the real threat lies in its top line.

As I write this, COVID-19 cases across Europe seem to be plateauing. Even severely hit countries such as Italy and Spain are starting to flatten the curve. I believe Canada, where I live, could flatten the curve by the end of April as well.

However, numbers in the United States seem to be on a similar, if not worse, trajectory. States like Florida ordered a “shelter in place” mandate only recently. 10% of the US population is still under no such order. Meanwhile, Donald Trump has instituted a taskforce to see if the economy could be reopened sooner.

These factors lead me to unfortunately conclude that the lockdown (and ensuing economic crisis) in the U.S. will be deeper and longer than anywhere else on the planet. That’s terrible for families that will lose loved ones and businesses that will have to shutter forever. It’s also bad for Facebook’s sales.

Here’s an extract from Facebook’s recent blog post that outlines the issue:

“We don’t monetize many of the services where we’re seeing increased engagement, and we’ve seen a weakening in our ads business in countries taking aggressive actions to reduce the spread of COVID-19.”

Beyond ads? The company does sell hardware such as the Portal and extract fees from payments on its platform. However, these sales account for low single digits of overall revenue. Although sales of Facebook’s portal could rise since more people need teleconferencing now, I can’t see how payment fees will rise in a quarter where unemployment and small business failure are skyrocketing. In short, Facebook’s non-ad business is negligible enough to overlook for this assessment.

How much the company could earn in 2020 is anyone’s guess, but Fitch Ratings recently published a note estimating how 2020 and 2021 ad spend could shape up. Economic activity has dropped to nearly 0. So, the cutback in digital ad spending could be wider. Here’s what Fitch says:

We expect overall advertising spending to contract in the mid-to-high single-digits range during 2020 and in the low-to-mid-single digits during 2021.

With that in mind, here’s my take:

A 12% decline in total annual revenue for a multi-billion-dollar company is immense. For any other company, this would have been lethal. However, Facebook has enjoyed more than a decade of near-invincible growth and profitability and now sits on a literal and metaphorical treasure chest of cash and data.

At the end of 2019, FB had $54.86 billion in cash and cash equivalents. Another $35.7 billion in marketable securities and $9.5 billion in accounts receivable. All three will certainly be impaired in 2020; however, the company has enough resources to survive more than a few brutal years like this.

A 12% decline in revenue and 17% surge in costs squeeze the margin nearly out of existence. It seems one of the most lucrative companies in the world now faces a plummet in profits in 2020 and a gradual recovery in the years after.

Facebook’s survival isn’t in doubt. However, its valuation is now substantially different. Here’s how cash flow could shape up in the next three years and what that means for the company’s intrinsic value today:

Assuming normalcy won’t be achieved until 2022, it seems fair to run a discounted cash flow analysis based on 2022’s free cash flow and discount it back to today.

Of course, I trust Zuckerberg to have a card up his sleeve. The company is already poised for a pivot away from its reliance on advertising in the developed world. It’s seeking out a 10% stake in India’s Reliance Jio which should give it access to the largest wireless subscriber base in Asia’s second-most populous country.

It’s also planning to launch an e-commerce platform through Instagram which could be worth billions. Payments on WhatsApp alone would drastically change Facebook’s revenue model. In a few years, Facebook will be a more robust and more valuable company. For now, let’s wait for a pullback.

Facebook’s bottom line could take a hit this year, and that means investors need to readjust their assessment of its value. I believe a double-digit decline in revenue could be likely. Meanwhile, costs have expanded due to higher usage.

Based on these estimates, Facebook’s stock should be worth 30% less than what it is trading at today. This pullback could occur when Facebook reports earnings and offers its own (likely revised) guidance for the years ahead.

This idea was first discussed (in much greater detail) with members of my private investing community, Betting on Tomorrow. To get an exclusive “first look” at my best ideas, subscribe today >>