The ongoing COVID-19 pandemic has represented a significant disruption to the global economy. The timing for Brazil has been especially unfortunate as the country entered 2020 with building growth momentum and an overall improving economic outlook pushing the iShares MSCI Brazil Capped ETF (NYSEARCA:EWZ) to a 5-year high in early January. The optimism has been pulled back since the outbreak spread in Brazil, which has followed social distancing guidelines resulting in a shutdown of most retail and people-facing service sector industries. The expectation is for a renewed recession this year.

EWZ has now underperformed global markets and currently down by 45% year to date. Much of that decline is based on the Brazilian Real currency weakness, which has depreciated sharply against a strong U.S. Dollar. While the government has announced economic relief measures to mitigate some near-term consequences, uncertainties remain regarding the timetable for when conditions can normalize and the total economic impact. The silver lining here is that the country appears to have dodged the worst of the pandemic in terms of the actual public health crisis, which means its recovery could begin sooner rather than later. We see value in certain segments of Brazil stocks and take an overall bullish view on EWZ based on an expectation for an economic recovery going forward.

Brazil’s iconoclastic President Jair Bolsonaro made controversial remarks early on during the COVID-19 outbreak, favoring more targeted quarantine measures for at-risk groups while arguing that businesses should continue as usual. The Washington Post labeled Bolsonaro the world’s “coronavirus skeptic in chief”, citing remarks claiming the virus was little more than a common cold.

The reality here is that the actual response by the Brazilian government has been more orthodox than some of the headlines may have you to believe. While not issuing national quarantine or lockdown orders, Brazil took steps to close its borders, including restricting international travel while following World Health Organization guidelines. Bolsonaro wanted greater control in regards to isolation measures, but the Supreme Court ultimately decided that the President cannot impede the state’s social distancing rules.

Major cities like Sao Paulo and Rio de Janeiro have enacted social-distancing measures with all non-essential businesses currently closed similar to what is currently being observed in many U.S. cities. Even the iconic beaches of Rio are closed. In this regard, the economic challenges are just beginning with an expected wave of unemployment and losses across all industries.

The Brazilian government has launched the following programs in terms of relief efforts:

The Finance Minister of Brazil, Paulo Guedes, has cited total spending at upwards of BRL100 billion thus far, which pales in comparison to a figure closer to $2.2 Trillion in the U.S. coronavirus aid package. This is in the context of a smaller and objectively poorer economy. For context, the minimum wage in Brazil of BRL1,045 per month is approximately USD $200. Nevertheless, the case here highlights some vulnerability in Brazil and emerging markets in general amid the unprecedented economic disruption.

Local Brazilian bank Itau Unibanco S.A. (NYSE:ITUB) is forecasting a contraction in GDP of 2.5% for 2020. This represents a sharp revision lower compared to estimates of positive GDP growth of 2.5% at the beginning of the year. The main takeaway from their forecast is that there is an expectation for a full recovery by the end of the year, and GDP can rebound sharply in 2021 to 4.7% growth.

Other notable macro estimates include an expectation for more aggressive rate cuts, with the monetary policy rate reaching a new record low of 2.5% by the end of the year. The Central Bank last cut the SELIC policy rate to 3.75% with a 50bps point cut in mid-March. Unemployment which ended 2019 at 11.6% may rise towards 12.6% on a seasonally adjusted basis.

Any efforts at fiscal austerity or trend lower in public debt statistics are abandoned this year, with the nominal deficit reaching 12% from 5.9% in 2019, while gross public debt is expected to reach 86.5% compared to 75.8% last year. 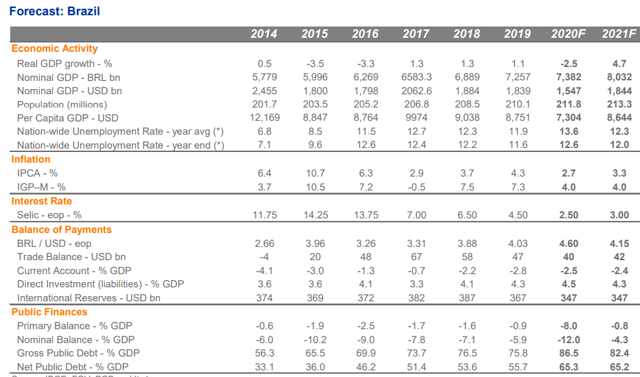 The caveat here is the significant uncertainty regarding the duration of the current lockdown and pace of the recovery in the second half. The GDP growth in 2021 will be aided by the statistical carryover from weak year-over-year comparison period but also the support of more aggressive monetary easing measures and lower interest rates.

In support of Brazil’s macro stability, a comparison to current conditions against the environment in 2015 during the last major recession is relevant. At the time, inflation levels at a 10.7% annual rate compared to current inflation of just 2.7%. Favorably, Brazil has deleveraged with corporate debt as a percentage of GDP now at 38.9% compared to 46.8% when it entered its last recession. The case here is that Brazil is fundamentally in a better position to manage the current crisis. The low interest rate environment and anchored inflation expectations support a positive long-term outlook for economic growth. 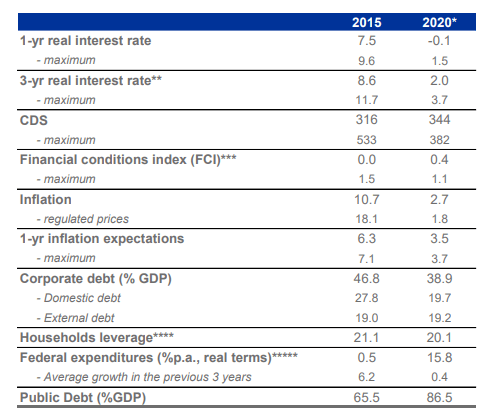 The current EWZ portfolio is comprised of 60 equity holdings. There’s a relatively high concentration in the financial sector, with a 32% weighting including banks like Itau Unibanco S.A., Banco Bradesco S.A. (NYSE:BBD) each representing about 8% of the fund. The largest holding is iron ore mining giant Vale S.A. (NYSE:VALE) with a 10.6% weighting, while state-controlled energy company Petroleo Brasileiro S.A. – Petrobras (NYSE:PBR) represents about 9% of the fund. In terms of the construction of the fund, our only criticism is the relatively top-heavy weighting as the top 10 stocks represent 51% of the fund. Overall, EWZ includes a variety of large-cap Brazilian companies across all sectors with adequate exposure to underlying domestic conditions in the country.

The performance of EWZ this year has been nearly catastrophic, with the fund down by 46% year to date. The consideration here is the sharp depreciation in the Brazilian Real this year of 18.5% against the strength of the U.S. Dollar. It follows that the stocks in EWZ priced in U.S. Dollars which operate in Brazil with revenues and earnings in Reais have been separately pressured by this weakness.

ITUB and Bradesco are down by 47% and 50.6%, respectively, each pressured by both the collapse in economic conditions along with FX impact. As commodity producers and exports, Vale and PBR are more hedged against the local currency weakness, but the external macro conditions have not been much better.

We previously covered Petrobras with an article back in January before the emergence of coronavirus, and the company had explained that it would be EBITDA-positive down to a Brent crude oil price of $33 per barrel. The circumstance with oil currently trading under $30 explains the stock’s deeper weakness and decline of 56% in 2020.

Overall, the declines are consistent with the significant economic challenges and ongoing uncertainties. Vale has relatively outperformed, while its returns are more dependent on external macro conditions, particularly iron ore demand from China. We expect these companies to survive but with a reset of expectations under a new macro environment.

The wild card continues to be the ongoing coronavirus pandemic. With data through April 9th, Brazil currently has 16,188 confirmed cases and 820 deaths. These figures are significantly lower compared to the more serious situation in Europe or New York City, for example. On the other hand, it appears Brazil is still in the acceleration phase of its outbreak and a few weeks behind other parts of the world.

It’s unclear if the virus will continue to grow in intensity, or if Brazil will end up lucky to escape a worst-case scenario. There is no timetable for when the isolation measures will end, but Itau Economics Research suggests a time frame from as early as April 22nd to the end of May.

As it relates to EWZ, the possibility that the outbreak is relatively benign in Brazil allowing the recovery process to begin sooner would be bullish for Brazil stocks. The precedence here in Australia with only 50 confirmed deaths, which is also a southern hemisphere warm-climate country that has not been as hard hit as parts of Europe. It’s not confirmed if this dynamic plays any role in the epidemiology of the virus, but anecdotally, colder climate regions have thus far faced the heaviest impacts. Politically, such a scenario would play to Bolsonaro’s favor as he has long contended that people should return to work while maintaining more targeted safety measures focusing on at-risk individuals like the elderly.

We sense that, over the coming 2 weeks, greater visibility on the path Brazil is taking on its coronavirus outbreak path can allow for more stability in the underlying stocks of EWZ. Less uncertainty would allow for renewed bullish sentiment in many of the beaten-down sectors like consumer discretionary and utilities.

We think the Real currency is at a new-normal type fair-value level around BRL5.00 per USD, having adjusted the macroeconomic conditions and external account trends. That being said, a monitoring point is separate trends in the Dollar which could weaken from historically strong levels and drive a relative appreciation in the BRL supporting EWZ returns.

Recognizing the significant economic disruptions caused by the coronavirus pandemic, we think the deep selloff in Brazil stocks has sufficiently reset expectations. Investors can look forward to continued stimulus and reform measures as the government attempts to support the economy and mitigate some of the near-term impacts. Once the coronavirus pandemic is contained in the country, a recovery process could drive renewed bullish sentiment towards Brazil. We are long EWZ based on value.

Are you interested to learn how this idea can fit within a diversified portfolio? 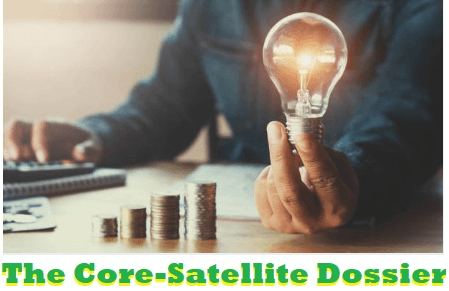