Evolution Mining (OTCPK:CAHPF) released its Q1 2020 quarterly report. As the company reports its financial results on a half-year basis, no income data were provided this quarter. However, the reported numbers show that the operating cash flow and free cash flow remain strong. Moreover, they should improve further over the coming quarters, as on April 1, the $375 million Red Lake gold mine acquisition was completed.

In Q1, Evolution Mining’s gold production declined slightly, to 165,502 toz, or by 3.2% compared to Q4 2019 and by 5.9% compared to Q1 2019. An even bigger decline was experienced by the silver production that decreased to 118,224 toz, or by 13.9% quarter-over-quarter. Copper production declined by 12.6%, to 4,832 tonnes (10.7 million lb). This was the third subsequent quarter of gold production declines. However, this should change soon. Not only due to the Red Lake mine acquisition but also due to the increased production volumes at Evolution’s old operations. The 2020 production guidance remains at 725,000 toz gold. It means that over 560,000 toz gold should be produced over the remaining three quarters of this year, which equals approximately 187,000 toz gold per quarter on average. This production growth should be fueled by the Mt. Carlton and Mt. Rawdon mines. At Mt. Carlton high-grade underground production should commence and at Mt. Rawdon, the operations should get back on track, following the Q3 2019 rockfall.

Despite slightly lower production volumes, Evolution was able to cut the production costs in Q1. The operating cash flow declined to $505/toz and AISC declined to $652/toz gold. Both, cash costs and AISC, declined to their lowest levels since Q2 2019. As the 2020 guidance envisions AISC of A$940-990/toz ($600-630/toz), the decline in production unit costs should continue also during the coming quarters.

The gold price did very well in Q1. It started the year at $1,520/toz, reaching a high of $1,683/toz on March 6. After a quick decline and a similarly quick recovery that followed, the gold price ended Q1 at $1,609. The average gold price (based on LBMA PM fixings) equaled $1,582.8/toz. Evolution Mining reported an average realized gold price of A$2,366/toz which equals $1,558/toz, using the average Q1 AUD-USD exchange rate of 0.6584. It is well above Evolution’s production costs which means that the company recorded some very nice profit margins. 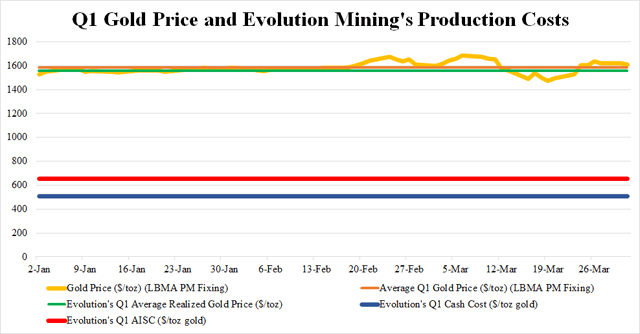 Source: own processing, using data of LBMA and Evolution Mining

Lower production costs and higher gold prices had a positive effect on Evolution Mining’s cash flows. These two factors were able to more than compensate for the lower production volumes as well as for the lower copper and silver prices. As a result, the operating cash flow reached its highest level in more than two years, as it climbed to $169.5 million. Compared to the previous quarter, it grew by 6%. The free cash flow experienced an increase of 33% quarter-over-quarter, to $70.2 million.

Evolution’s cash position remained almost unchanged, at $107 million. But its indebtedness grew rapidly, to $359.9 million, compared to $21.1 million as of the end of Q4 2019. The net debt increased from -$98.4 million to $252.9 million during Q1. The growth in indebtedness is related to the acquisition of the Red Lake mine from Newmont (NEM) that was financed via debt. But given Evolution’s current cash-generating ability, the indebtedness should be declining quite rapidly over the coming quarters.

Another good news is that Evolution hasn’t been directly impacted by the coronavirus yet. As a result, it has reiterated its 2020 production and cost guidance of 725,000 toz gold, at an AISC of A$940-990/toz ($600-630/toz), not including the Red Lake mine production. However, the incorporation of the new mine seems to go well. As stated by Glen Masterman, the VP for Discovery and Business Development:

We were very pleased to take the keys at Red Lake early in the month and we have now completed a full quarter of drilling on the Evolution stewardship. Four rigs have been operating continuously underground during the quarter. Drilling is focused at Cochenour and Lower Red Lake with the purpose of converting resources to reserves and to expand ore bodies in these areas of the mine. So far we are very encouraged by recent drilling results, particularly from Cochenour, which has generated high grades over good mining thicknesses.

Evolution intends to release a new reserves estimate and a long-term outlook for Red Lake in Q3. Moreover, it looks like exploration at Cowal and Mungari progresses successfully too. There are three drills underground and three drills at the surface, at Cowal right now. A maiden reserves estimate for the underground deposit is expected by the end of this year. And a PFS for an underground mining operation that should complement the current open-pit mine is underway. 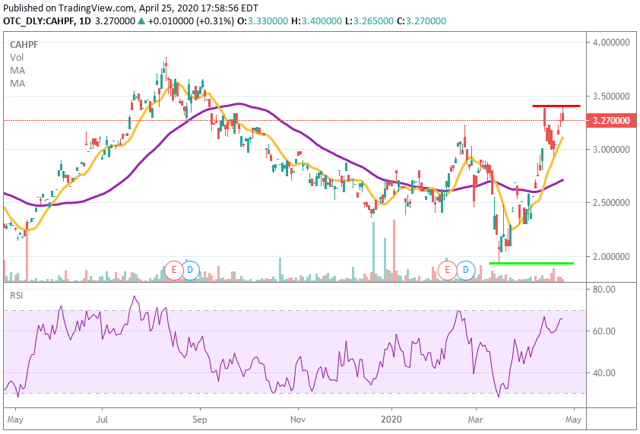 As can be seen in the chart above, Evolution’s share price did well during Q1 2020. At the very beginning of January, the share price was around $2.6. Fueled by the growing gold price, it climbed up to the $3 level by late February. Although in early March, it experienced a steep decline to the $2 level, the revived gold bull run elevated it to new highs at $3.4. However, the situation starts to look more complicated here. The share price is above the 10-day, as well as the 50-day moving averages, moreover, the 10-day moving average is situated above the 50-day moving average. This all is bullish. On the other hand, the RSI is close to the overbought levels, and it looks like a double-top formation is being formed. If the share price breaks the current resistance at $3.4, further growth may follow. On the other hand, a decline below $3 would mean completion of the double-top reversal formation, with potential for a more significant drop.