Despite the dramatic collapse in oil, Energy Transfer (ET) is showing some signs of life, recovering more than 50% from its 52 week low of $3.75.

The energy space is under unprecedented turmoil, on the verge of collapse due to the coronavirus pandemic and global crude glut. The OPEC+ agreement failed to stabilize the market and the great oil collapse continues, with oil crushing to the lowest point since 1999. We even experienced negative oil prices one day before the May ‘20 contract would expire. Today’s EIA data on US oil inventories could dampen the situation further. The world is flooded with oil and the oil market is running out of storage space. As a result, oil tankers are being used to hold record amounts of crude at sea (also referred to as floating storage). This benefits my investment in Teekay Corporation (TK), which owns tankers via its daughter Teekay Tankers (TNK), Tsakos Energy Navigation (TNP) and Euronav (EURN), which owns a large fleet of VLCCs (very large crude carriers).

Traditionally, ET is heavily correlated with the price of oil, as illustrated in the graph below.

Interestingly, over the past few days there is a divergence between ET’s unit price and the price of oil. That said, as mentioned above, this might not last for too long given how fluid this situation is. One must be prepared for more volatility and spread his/her buys over time, in a disciplined manner. Another point to note is that ET’s unit price also enjoys support due to the upcoming distribution which is payable on May 19 for shareholders of record May 7 (ex-dividend date: May 6). Many might wonder what will happen after the ex-dividend date.

At this point, it is important to highlight the underlying thesis underpinning my investment in ET. Prior to the coronavirus outbreak, I was of the view that ET was heading in the right direction, towards a self-funded model. This seems to be the case today as well, all else constant. Each quarter, ET is left with more than $700M after distribution payments, providing tremendous financial flexibility and a reasonable path towards deleveraging. What’s more, the corporate structure has been simplified (all operations are now under one roof due to roll-up of ETP, without IDRs and conflicts on interest). As such, the average unitholder is now aligned with insiders more than ever (total insider ownership is 14.5%). The CEO continues to buy units in open market purchases, aggressively, having invested more than $130M in the last 6 months:

The fact that the CEO is investing such large amounts to acquire units in open-market transactions (as opposed to playing games with stock options etc) is comforting, especially in times of turmoil. Skin in the game is important.

Having said that, there are many criticisms about the CEO’s empire-building ambitions, with 12 acquisitions since 2004 (including SemGroup) which have resulted in elevated impairment charges due to poorly integrating acquisitions. On the other hand, one could argue that ET is now better positioned than ever, in part due to these acquisitions, as it has built a fully integrated platform spanning entire midstream value chain and assets well positioned in most active basins.

Another criticism is the debt is higher than what the market wants, especially compared to quality peers like Enterprise Product Partners (EPD). In any case, ET maintains a strong investment grade balance sheet and the leverage target of 4.0–4.5x debt/EBITDA is achievable due to retained cash flow of ~$2.5 – $3.0Bn per year (after distribution payments).

Another common criticism is that MLPs are out of favor given the K-1 tax package, which is complicated for retail investors. To this end, many argue that ET should convert into a regular dividend-paying C-corp. This poses several complications, and possibly a very large tax bill for the CEO and other large unitholders. Instead, management has suggested that it will consider an alternative c-corp structure, without directly impacting the MLP. Maybe something like what Brookfield Property Partners did with its REIT (BPYU) while retaining the legacy MLP structure intact (BPY). Effectively, Brookfield’s REIT vehicle tracks the MLP on an one-for-one basis.

In my view, the above concerns are not such a big issue, especially relative to the possibility of lost revenue/backlog. ET is getting closer to achieving a self-funded model. This is the key reason for my investment in ET. In general, my main investment criteria are as follows:

I look for companies with stable (and ideally growing) cash from operations, sufficient to cover all of the following:

This model has served me well over a prolonged period of time and is a recipe for success. For this model to work, as mentioned above, I look for companies with stable (and ideally growing) cash from operations. Simply put, this means that the revenue must be coming in as planned and worst case expenses can be reduced to offset any revenue declines. I put more emphasis on the former rather than the latter. What matters to ET the most is for its revenue to remain intact. Given the collapse in the energy space, many are concerned about a massive wave of bankruptcies in US the oil & gas sector. This in turn, may impact ET’s backlog, and this will be a blow to the self-funded business model aspirations, unless there is a distribution cut commensurate to the revenue decline, something that I don’t want to happen. ET prepared the following slide in its March Investor Presentation, to alleviate market concerns: 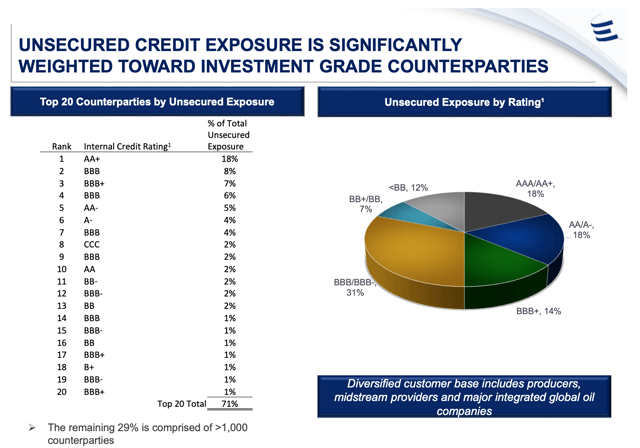 As the title of the slide notes, ET’s unsecured credit exposure is significantly weighted toward investment grade counterparties. In particular, 71% of total unsecured exposure is derived from 20 customers, with the balance comprised of more than 1,000 counterparties. That seems ok, but what about the secured credit exposure? In the past, many would not lose sleep over this. However, the unprecedented situation in the energy market is making many nervous, and rightfully so. Oil and natural gas companies are bleeding money, buyers are invoking force majeure clauses, etc. After all, the energy space is a chain. Occasionally, some participants in the chain might benefit over others, but eventually stability needs to be restored. What’s going to happen if there is a massive wave of contract renegotiations, even for secured contracts? Will ET take their clients to court or try work out something with them? I presume it will be the latter. No doubt, ET enjoys a diversified customer base (major integrated global oil, midstream providers, etc), however the risk of lost backlog or deferral of payments is real, regardless if the majority of ET’s backlog is fee-based (i.e. not exposed to commodity prices). One needs to be mindful of this.

ET usually provides monthly investor presentations but unfortunately for the month of April we don’t have one yet. 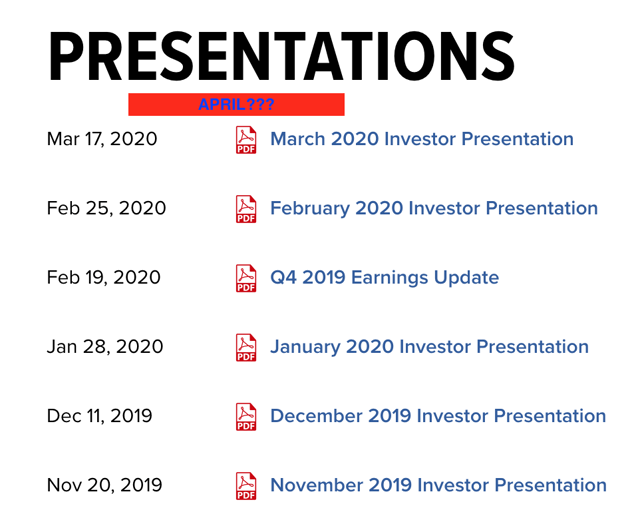 I have no doubt many would like to get a meaningful update on ET’s backlog situation. My view, is that most of it will be kept intact. The fact that the common distribution for FY 2019 was a healthy 1.96 times helps a lot, in case we experience declines in revenue. Once the dust settles, I still expect positive free cash flow starting in 2021, which is a major milestone for ET that sets the foundation for superior returns over the long run. Lets not forget what a long way ET has gone, shifting away from the traditional MLP model that heavily relied upon ongoing share capital increases with very low distribution coverage ratios.

As I finish writing this article, oil jumps more than 15%, reversing steep losses after volatile overnight session and Larry Kudlow says oil should rebound as the economy starts to reopen. Lets see what happens. As things stand, I still believe investing in ET will provide superior returns over the long term. That said, I am closely monitoring the situation.

Disclosure: I am/we are long ET. I wrote this article myself, and it expresses my own opinions. I am not receiving compensation for it (other than from Seeking Alpha). I have no business relationship with any company whose stock is mentioned in this article.