Without any close competitor, DocuSign (DOCU) is very well positioned to grow and maintain its share in the ~$50 billion TAM opportunity. To realize further growth opportunities, the company strategically broadened its vision by launching the Cloud Agreement software suite that covers the entire enterprise agreement lifecycle in the first half of 2019. Overall execution and the move towards the enterprise segment have been promising. In Q4 2020, revenue grew by a staggering 39% YoY, which was 200 bps higher than a year ago. Billings also grew by 40% YoY while the company generated positive cash flows. Driven by the company’s market leadership, strategic M&As, and the addition of key hire Rob Giglio as CMO, we expect the company to gain more enterprise traction to sustain its solid growth and achieve its $1+ billion revenue target by the end of 2020.

eSignature makes up ~$25 billion of the $50 billion Cloud Agreement TAM, and DocuSign has been the market leader for some time. The name DocuSign itself has also become synonymous with eSignature. DocuSign is far ahead of the other well-known eSignature players such as Adobe Sign (ADBE) or Hellosign (DBX). In 2019, DocuSign recorded a revenue of $974 million, which is primarily driven by its eSignature solution.

The semi-monopoly position allows DocuSign to pursue various growth opportunities in the $50 billion underpenetrated markets. The company’s 585,000 customers merely represent ~1% of the estimated enterprises and other DocuSign’s target markets worldwide. As the company aims to achieve a $1 billion revenue target, the company will on board more enterprise clients, to which the Agreement Cloud is a huge value add. In that sense, the acquisition of SpringCM in 2018 was a pivotal move. SpringCM has enabled DocuSign to augment its eSignature product with the CLM (Contract Lifecycle Management) feature, which is a key component of Agreement Cloud. 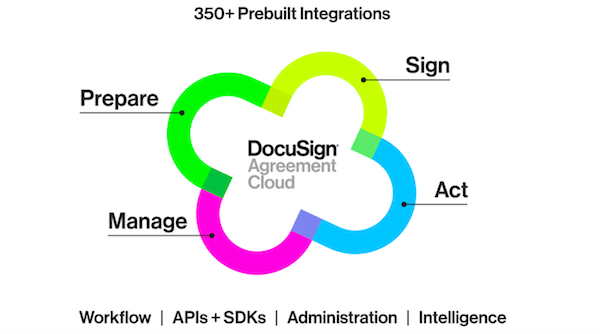 The SpringCM acquisition to boost the enterprise segment has been successful so far. The product was recently named by Gartner as a leader in its 2020 Magic Quadrant, while clients with ACV greater than $300,000 grew by 41% YoY in Q4 2020. Furthermore, the significant growth in high ACV clients also positively impacted operating cash flows/OCF, which grew by ~52% to $116 million in FY 2020. While SpringCM was more of a strategic acquisition due to its CLM business, the Seal Software acquisition, which is still pending, is strategic due to its overall go-to-market and product (AI) enhancement capabilities. As we learned from the CEO Dan Springer in Q4 2020 earnings call, the sales teams of Seal and DocuSign have been partners for some time:

When we bought Spring, we didn’t have an existing commercial relationship in place, where we were selling their products. We’ve been selling Seal for over 1.5 years. And I think that motion is now very well understood by our field force. So, I don’t expect that to be very different once we close the deal and integrate them. Obviously, in the period between now and close, we have to operate the businesses independently. But once we do close as Mike said, we’re targeting that in our second quarter. I believe it will be a relatively seamless integration from that standpoint because of our experience in already selling their products.

The appointment of new CMO Rob Giglio will also be a key factor in getting the enterprise go-to-market right. Giglio came from Adobe, where he was the SVP of go-to-market and sales. During his time in Adobe, he participated in executing the major shift into cloud subscription in 2013 that has transformed Adobe into a company with a $5 billion recurring-revenue today. Giglio’s customer-focused and data-driven approaches at Adobe, as we have learned from his keynote at Imagine 2019, are highly applicable across go-to-market functions. Therefore, while his role is crucial in getting enterprise clients for Agreement Cloud in the near term, it will be equally important in the long term where DocuSign will look to increase the efficiencies of its go-to-market channels.

At the moment, the company prioritizes growth over margin expansion. In FY 2020, Non-GAAP operating profitability was at 5%, which is still far from its long-term target of 20% – 25%. The company also recognized a net loss margin of -21%. In that regard, it is still not quite clear yet how DocuSign will get to profitability despite being a market leader. Just like many software companies we have seen, however, much of the lack of profitability is due to the non-cash expenses, such as stock-based compensations, across the Cost of Revenue and Operating Expenses.

Like most of its cloud software peers, the gross margin remains solid, though it has dropped by 200 bps in the last two years. The culprit here has been the “Professional services and other” segment, which has not been profitable. This will be the area where DocuSign can improve a lot further under the CMO Giglio, who has done a great job in executing Adobe’s enterprise go-to-market efforts. As the Agreement Cloud gains more traction, we expect the “Subscription” revenue to drive more than 95% of revenue.

Relative to the other cloud software players in its peer group, DocuSign’s 16.38 P/S means it is not cheap. After all, DocuSign, Slack (WORK), and Zoom (ZM) are the stocks that benefit the most from the working-from-home trend triggered by the COVID-19 outbreak. DocuSign, however, is the only stock alongside Zoom that can extend its extraordinary revenue growth more sustainably in the near term. Both stocks have consistently posted double-digit OCF margins in recent times.

Slack, on the other hand, still has a lot of work to do to improve its cash flow generation and overall bottom line despite growing its top line over 57% YoY. DocuSign’s enterprise focus with the Agreement Cloud, in the meantime, has been driving its OCF growth in the last two years. OCF grew by ~52% YoY in FY 2020 alone.

With no close competitors in sight, DocuSign is in the best position to secure the majority share of the ~$50 billion Agreement Cloud TAM. At the moment, DocuSign is the only player with a complete offering in the enterprise Agreement Cloud which ranges from eSignature to CLM. It is also a universal offering that integrates with over 350 other applications. In the meantime, Adobe’s Sign and Dropbox’s Hellosign are too far behind because they are less strategic to their respective core businesses and only tapping into the small subset of the $25 billion eSignature market. The Agreement Cloud adoption at the enterprise segment will enhance DocuSign’s moat as the market leader. Eventually, it will create a pricing power that drives future margin expansion. 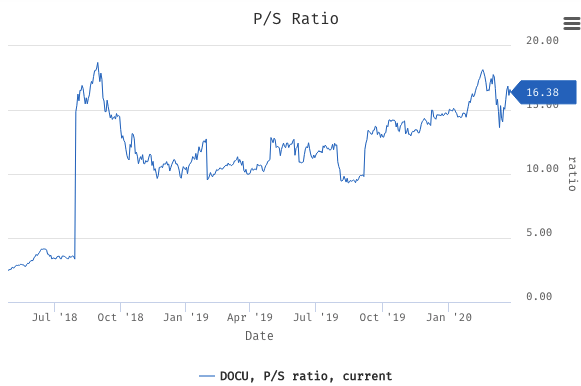 Since last year, there has been a lot of ongoing optimism in the stock. P/S has been in upward trends and has remained less affected by the recent broad COVID-19 selloff. Given the various catalysts we discussed, the stock may even sustain its level of P/S ratio by the end of FY 2021. On a more conservative note, it is also likely that the stock trades at a midpoint of the forward 11.89 P/S and the current 16.38 P/S at ~14 P/S. The expected $1.26 billion revenue in FY 2021 and the share count of 181 million further give us an estimated target price of ~$98 per share.

Disclosure: I am/we are long DOCU. I wrote this article myself, and it expresses my own opinions. I am not receiving compensation for it (other than from Seeking Alpha). I have no business relationship with any company whose stock is mentioned in this article.