Oil: The drop in oil prices has been grabbing the headlines with WTI trading below $12/bbl. However, the move has been largely concentrated in the May contract, which expires tomorrow. As such, most of the volume is in the June contract which trades at $22/bbl and thus the spread between front and second month is the widest on record (over $10). Consequently, volatility will likely persist in the run-up to expiration. Alongside this, short-term factors look set to weigh on oil prices, particularly as concerns over a lack of storage persists with eyes on Cushing storage (capacity of 76mln, current inventory of 55mln).

Source: CME. June Contract Trading at 5 Times the Volume Than May.

CAD: For commodity currencies such as the Canadian Dollar, low oil prices continue to weigh. More importantly, Canada’s major grade of oil (Western Canadian Select) had been trading with negative prices, which would theoretically mean that producers would pay buyers to take oil away. That said, with the significant deterioration in Canada’s terms of trade, the Canadian Dollar looks set to remain soft.

NZD: The New Zealand Dollar outperforms as NZ looks to ease lockdown measures on April 27th with companies being allowed to get ready to open for business this week. Elsewhere, the upside beat in Q1 CPI had also provided a mild lift to NZD. 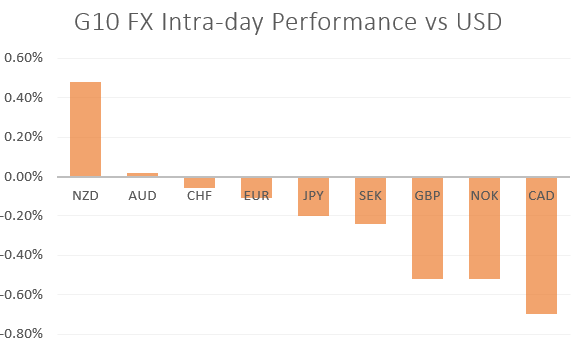