There were a few reasons for this. One factor was the prospect of widening withdrawal from the lockdowns which have shuttered many national economies as part of the efforts to halt coronavirus. Australian Prime Minister Scott Morrison added to this cheerful list by saying that the easing of restrictions in that country was probably ‘not too far away.’

The US Federal Reserve will give its April monetary policy call later in the session. It’s not expected to loosen the reins even further, but investors clearly hope it will underscore the probability of a long, accommodative period ahead. US stock futures have risen into the announcement, with most Asian bourses higher too.

Closer to the oil market, there was a crumb of good news in US inventory data. The American Petroleum Institute said on Tuesday that crude oil stockpiles rose by ten million barrels in the week to April 24. That’s still a huge amount but it was 600,000 barrels below expectations.

Gold prices edged up, boosted by a dependable cocktail of a weaker US Dollar and the prospect of a dovish Federal Reserve.

The metal tends to benefit from economic stimulus measures as it’s often seen as a hedge against inflation and the weakening of currencies which can come with them. Staying with inflation Australian consumer price rises reached levels not seen since 2014 in the year’s first quarter, but futures markets suggest that investors don’t believe that this will be enough to prevent lending rates from reaching zero for the first time next month.

There may be tentative signs of an emerging uptrend on US crude oil’s daily chart but it is very early days. Support may be creeping in at a band between Monday’s closing low of $13.21/barrel and the psychological $10 level. The uptrend line offers some prospect of an additional prop at $13.34, but this is unlikely to survive much of a test.

To the upside April 23’s closing peak of $18.80 remains important nearby resistance which will have to be taken back convincingly before bulls can think of testing the longer term downtrend. 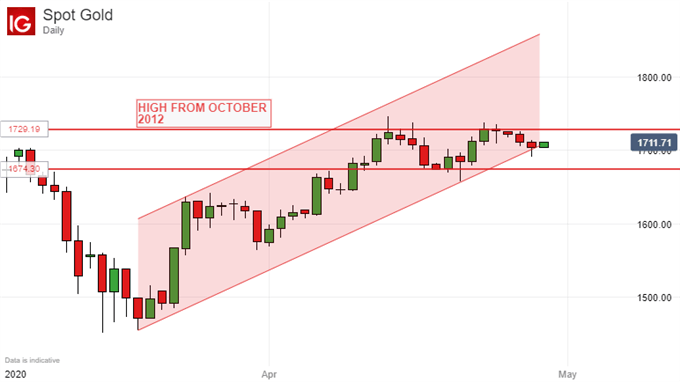 For all the apparent revival in risk appetite gold prices remain rangebound at high levels, with no urgent impulse to take profit in sight. Prices seem to have broken below their previously dominant uptrend channel but they have yet to do so convincingly. In any case the bottom of the current range at $1647.30/ounce appears to offer important near-term support and it may need a much bigger increase in risk appetite to see prices durably below this level. $1729.19 remains as key immediate resistance.