Crude oil prices were lower in Asia on Monday thanks to signs that global storage facilities are filling up rapidly as the coronavirus pandemic crushes demand.

US futures prices led losses as data at the end of last week showed inventories there at 518.6 million barrels in the week to April 17. That’s close to the all-time record of 55 million. Floating storage has already made a new all-time high at 160 million.

Crude oil prices have now fallen for eight of the past nine weeks, and for a third week straight as of last Friday. That this should have occurred in the very month that the Organization of Petroleum Exporting Countries and allies including Russia, the so-called ‘OPEC Plus’ group, pledged major output reductions is truly remarkable.

The coming week will bring a plethora of corporate earnings and timely Purchasing Managers Index data from around the world. It seems highly unlikely that any of these will offer much comfort to the energy market. Official numbers from China Monday showed March industrial profits down 34.9%. That was dire, clearly, but it was also better than the 38.3% see in the previous month.

Investors can see some positives still despite the ravages of contagion. The various monetary and fiscal stimulus packaged put in place around the world were added to Monday by the Bank of Japan. Japanese monetary settings have been ultra-loose for years but the central bank showed that it still has ammunition left by removing the ceiling on its monthly government bond purchases and increasing its scope to buy corporate bonds and other commercial paper.

Prices appear to be wilting once again on their daily chart, and well below the psychological resistance level of $20/barrel too. April 22’s intraday low of $10.83 may provide a barrier between current levels and the current cycle low made the day before at $7.55. However the market remains clearly in the grip of a longer-term downtrend and that won’t be challenged unless the bulls can crack $23.71. That seems unlikely in a week replete with corporate and national economic data that are unlikely to be supportive. 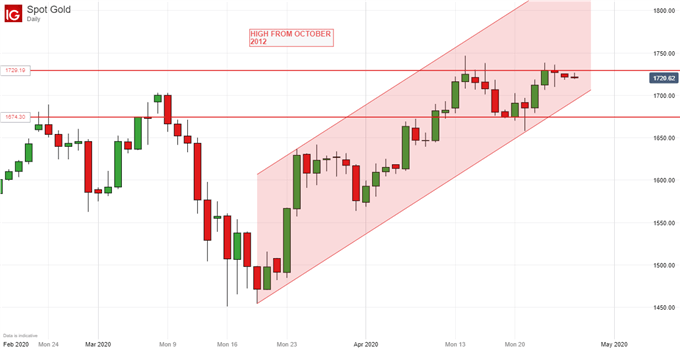 Prices remain firmly within their dominant uptrend channel and continue to flirt with the peaks of October 2012. However, there seems little appetite to break above them at present, and indeed there may not be until after April’s end.

Near term it may be best to think of a broad range between April 20’s closing low of $1674.30/ounce and April 23’s closing peak of $1729.19, with the direction of any conclusive break likely to prove instructive.