The current environment is hostile to oil and gas producers. As we write this, front end West Texas Intermediate Futures are diving to under $12/barrel and we have started seeing negative prices in different grades. We did break down the macro view on oil recently and suggested that we had a more bullish outlook longer term, but had zero hopes that an OPEC deal could rescue the front end of oil futures.

The low prices claimed another victim recently and that’s one we will be discussing today. CorEnergy Infrastructure Trust, Inc. (CORR) shocked investors by taking a big axe to its distribution. Sure, one could argue that in this market, practically nothing should shock investors, but the size of the distribution cut likely spooked even the most battle-hardy investors.

CORR announced that Cox Oil has provided notification of its intent to suspend payment of rent, beginning with the April payment, on the Grand Isle Gathering System (GIGS) owned by CorEnergy. Cox attributed the decision to its plan to shut in production on all of its wells in the Gulf of Mexico due to the reduction in the price of oil in the current global economic and health crisis.

Dave Schulte, Chief Executive Officer, said, “We are in discussions with Cox regarding their plans while also taking steps to protect CorEnergy’s interests under the lease on behalf of our stockholders. Rent continues to accrue whether or not oil is being shipped.”

Commenting on dividend paying capacity, Schulte said, “We continue to closely monitor the challenging market conditions for potential impact to our upstream producer tenants. Ultra Petroleum delayed the filing of its most current 10-K and disclosed that it is presently in discussion with its lenders. Based upon the adverse impact of current market conditions on our material tenants, we expect to recommend to the board a reduction in the next quarterly common stock dividend to $0.05. At such time as rent is received, we will consider various means of returning capital to our stockholders, including further adjustments to the dividend consistent with prudent coverage ratios. The Company intends to comply with the REIT taxable income distribution requirements. We anticipate recommending declaration of the regular quarterly cash dividend for the first quarter on the Company’s Series A Preferred Stock.”

A nickel. That’s what the massive $0.75 quarterly dividend was slashed to. Investors relying on steady dividend income have faced quite a few bombshells recently but cuts of this magnitude still hurt. While CORR mentioned Cox Oil, its decision on the distribution was likely heavily influenced by Ultra Petroleum’s (OTCQX:UPLC) delay to file its 10-K as well. UPLC is flirting with another possible bankruptcy.

While there are many, many distressed E&P companies, CORR’s exposure is rather unique as it’s somewhat a two-trick pony. We discuss what we mean by that below and also make a recommendation for investors interested in this company.

The Assets Which Are Impacted

CORR’s customers discussed above lease two major assets which we shall briefly discuss below.

Grand Isle: The GIGS includes 153 miles of undersea pipeline that transports oil and water from six Energy XXI (EGC) fields in the Gulf of Mexico. The terminal also includes storage tanks and a saltwater disposal facility. At the time of acquisition, the GIGS system transported approximately 60,000 barrels/day but had a total capacity of 120,000 barrels/day. The Grand Isle Gathering System is CORR’s largest asset and serves approximately 40% of the total reserves held by Cox Oil. Cox Oil is a privately-held operator in the Gulf of Mexico and it paid approximately $320 million for the stock of EGC. The GIGS lease agreement has been assumed by the new owner of EGC as part of that transaction.

The Pinedale Liquids Gathering System (LGS) consists of more than 150 miles of pipeline and four central storage facilities located in the Pinedale Anticline, southwestern Wyoming. The system was acquired in 2012 and leased to a subsidiary of Ultra Petroleum. The lease was a triple-net lease but has upside participation for CORR depending on volumes of liquids produced by UPLC subsidiary, Ultra Wyoming LGS LLC .

For its internal analysis, CORR assumes average Pinedale well lives of 35 years. In December of 2019, UPLC described Pinedale as having over 4,000 vertical well drilling locations remaining. Actual wells drilled will be dependent on economics, but these data suggest the potential for multiple decades of drilling location inventory with the last of these wells continuing to produce for approximately 35 years thereafter, providing a long-term perspective on the utility of the Pinedale LGS.

CORR’s financial futures are rather heavily tied to two companies. Energy XXI GIGS Services LLC via COX Oil was paying CORR $39.69 million annually. Ultra-Wyoming LGS LLC was paying CORR an annualized $22.14 million of revenues. The two together provided over $61 million of annual revenues based on the latest lease rates for CORR’s properties.

CORR’s 2020 estimated revenues were in the $95-$100 million range. So if $61 million in annualized revenue was even temporarily compromised, it could present enough of a headwind for CORR to slash its common distribution to zero. We would note here that at the moment only Cox Oil has created the rent non-payment issue, but with UPLC flirting with another bankruptcy and oil prices being substantially lower than what they were just two weeks back, it’s looking likely that UPLC may become a problem child as well.

But what’s a realistic longer term outcome here? CORR’s infrastructure is critical for both these companies. In a bankruptcy the equity might get completely wiped out and the bondholders may take a haircut as well, but can they really renegotiate the terms? It’s highly unlikely as both assets are very unique and cannot be replicated. We saw this also in 2016 when Ultra Petroleum filed for bankruptcy the first time. They did not even bother to challenge the lease.

But let’s assume the worst-case scenario. Both ULPC and Energy XXI GIGS services LLC force a 50% revenue reduction for the next two years. In the draconian scenario the revenues are cut permanently during this time period, i.e. the rent is lost and not just deferred. What would happen in such a case?

CORR likely would find very few expense offsets to this rent cut and the reduction would flow straight to CORR’s funds from operations (FFO) and adjusted FFO (AFFO). This would likely cause CORR’s AFFO before preferred dividends to drop from about $62 million annually to $30 million annually. CORR common shares would likely get a $1/share of distributions annually. What’s really interesting to us though is that the preferred distributions of $9.6 million would be covered by over 3X, even in the worst-case scenario.

While at the base level the preferred share dividends are well covered, we do have to examine whether the debt can bring the whole situation down. CORR has minimal debt maturities in 2020 so that should give it some breathing room in case of lower revenues.

But beyond that, CORR’s net debt is so small that there’s zero risk to the viability of the firm. 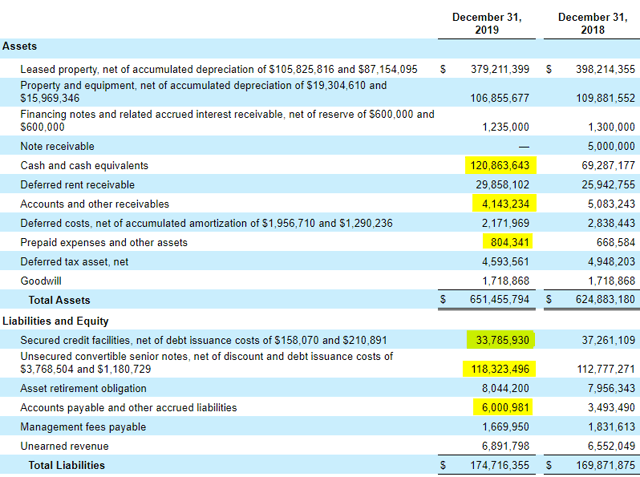 So in essence anyone buying the preferred shares is betting that the value of the whole company is at least $157 million. That’s a pretty sound bet in our opinion as the company generated adjusted EBITDA of more than $71 million in 2019. Even in our extreme case if adjusted EBITDA falls drastically, we would still expect it to be enough to retire the net debt in a single year. There also are secondary assets

The preferreds yield 13% and have a distribution that has a worst case coverage of 3X. That represents a very good risk-reward proposition. We would caution though that there’s a very small chance of a short-term deferral if cash flow from these two entities completely stops. Considering CORR’s liquidity (over $250 million available), we think this is a less than 5% chance of the preferred dividends being deferred, but investors should be prepared. Longer-term deferrals would not happen as we expect some rents to be paid and as CORR is a REIT, the tax man will insist on paying some distributions at least. We think this will exceed the preferred level distributions.

We would look for dips to buy CORR.PA but use limit orders and buy in small amounts. These traded as low as $7.57 in late March, so if the market turns down and there are rumors of a preferred distribution deferral, we can certainly see sub $10 as possible.

The common shares are a very different ballgame here. Adding the common shares to the enterprise value (after net debt and preferred shares) doubles the total calculated amount. Yes that can work out and we still think ultimately full rents will be paid on all properties. But the risk for common is substantially higher. Investors looking to go long might be better served by selling the September $12.50 puts for more than $3.00. That would give them a better risk adjusted entry. 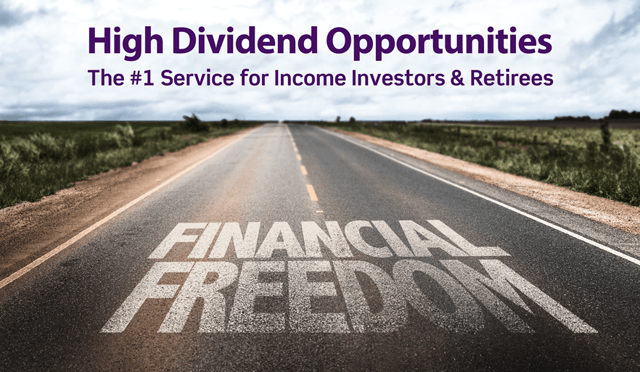 HDO is the largest and most exciting community of income investors and retirees with over +4000 members. We are looking for more members to join our lively group and get 20% off their first year! Our Immediate Income Method generates strong returns, regardless of market volatility, making retirement investing less stressful, simple and straightforward.

Invest with the Best! Join us to get instant-access to our model portfolio targeting 9-10% yield, our preferred stock and Bond portfolio, and income tracking tools. Don’t miss out on the Power of Dividends! Start your free two-week trial today!

Disclosure: I am/we are long CORR.PA. I wrote this article myself, and it expresses my own opinions. I am not receiving compensation for it (other than from Seeking Alpha). I have no business relationship with any company whose stock is mentioned in this article.