Cloudera, Inc. (CLDR) is a company that operates in an extremely competitive arena for data management, machine learning, and analytics. It is a company that I enjoy writing about, not because it is a terrific company but because of the backlash from my negative view of the company. I like the attention, even if it is negative.

At the beginning of the year, I wrote the article “Cloudera: Better Than Vegas” and to put it politely most readers weren’t too happy. Needless to say, the stock price has underperformed since then, down 30% versus 12% for the S&P 500. This underperformance was in spite of the “bullish” Q4 earnings report that temporarily caused a 15% spike in Cloudera’s stock price.

So today I am back at it, reviewing Cloudera’s annual report and Q4 2020 earnings call, looking for any new information that might cause me to revise my neutral rating.

Unfortunately, after reviewing the latest documents and transcripts, I remain unconvinced that this is a company worth investing in at the present time. My arguments from the past remain unchanged. There are better, less risky companies to invest in. Therefore, my rating for Cloudera remains neutral. I am looking forward to a great deal of backlash from this article, so bring it on!

In January 2020, Cloudera announced that Rob Bearden, former CEO of Hortonworks, was the new CEO of Cloudera. This is certainly a positive move, given his familiarity with the products, marketplace, customers, and the need for a leader to move the company forward.

But one thing that became clear as I read the Q4 2020 earnings call was that this new CEO likes to talk. His monologue, or should I say pep talk, was significantly longer than any other earnings call CEO speech that I can recollect, particularly when there wasn’t that much to talk about. But he did reveal some interesting details that have me concerned about the state of the company that I shall highlight in the following paragraphs.

Let’s start with the CEO’s statement regarding the Total Addressable Market (NYSE:TAM). He sets expectations with the following statement:

Given the above statement, one would expect that Cloudera’s goal would be to at least ride the coattails of the four large TAMs which are growing at a rate of 20% annually, and then some. Right?

But later on in the Q&A session, CFO Jim Frankola responds to a question on growth with the following message:

When we look out into the foreseeable future, our software business will be growing at roughly 10%. That is a really good baseline.

Certainly, there are other big data companies that are achieving 20+% annual revenue growth, so why not Cloudera? As an investor, I would not be happy to hear about 10% revenue growth over the foreseeable future. Don’t investors deserve better?

In my previous article, I indicated that I thought that Cloudera had rushed CDP out the door a few months after conception due to extreme pressure to turn the company around. They had handpicked 20 preferred customers to beta-test CDP. After 3 months, one customer had already dropped out.

After reading the Q4 2020 earnings call transcript, I was disappointed that there had been no update on the status of the beta-testing, now referred to as “trials”. But then I came across the following statement by the illustrious CEO:

In CDP Public Cloud services, for example, we’ve already had more than a dozen customers who are actively using or repurchased these offerings.

This statement appears to be a roundabout way of telling us that the number of customers trialing CDP is now 12 (or less), down from the original 20. This just after 6 months of use. If true, this does not provide a rosy picture for Cloudera’s future. Perhaps, I am not interpreting this correctly and I am sure readers will provide feedback on this in the comments section.

But what have the sales and marketing department accomplished? Let’s have a look:

… we had another good quarter in terms of adding customers. We now have 1,004 customers who exceeded $100,000 of ARR, a net increase of 27 for the quarter. And notably, 21 of the 27 customers are new customers rather than expanded relationships.

Deciphering this statement, it appears that in the most recent quarter (Q4), Cloudera increased its customer count by approximately 2%. I would like to remind readers that Q4 is the big quarter enterprise customer signup. Perhaps the situation can be explained as follows:

And we also have the good fortune of being in the middle of a product transition, where our primary business focus is on existing customers.

I am having some difficulty in how Cloudera can be spending 59% of its revenue on sales and marketing while they are only focused on existing customers. The new CDP will still be in trial for another half year by preferred customers, and even then it doesn’t include the private cloud offering. Does Cloudera plan to spend such large amounts on sales and marketing while it is waiting for CDP to be trialed and fully released somewhere down the road?

Here is a statement by the CEO that I can only chuckle over:

In simple terms, we are guided by the Rule of 40 and expect sustained non-GAAP operating margin expansion for the next several years.

Well, I have to give it to Rob Bearden. He certainly knows what buzz words to toss around. But I can assure you, Cloudera is a long way from fulfilling the Rule of 40.

For a description of how to compute the Rule of 40, please refer to one of my previous articles.

Given the large acquisition last year, the combined revenue growth is difficult to assess. Therefore, I am going to use Cloudera’s stated forward annual revenue growth target of 10%.

The other factor required in order to compute the Rule of 40 is the free cash flow margin (%). Note that many analysts use earnings instead of free cash flow.

In Cloudera’s case the Rule of 40 calculation is as follows:

Cloudera scores well below the 40% needed to fulfill the Rule of 40, meaning that Cloudera is having difficulty achieving a healthy balance between growth and profitability.

Let us keep in mind that company management expects to see rising margins throughout the year. Perhaps so, but they have a long way to go if they want to fulfill the Rule of 40! The company’s free cash flow margin will need to rise from -5.5% to 30%!

One of the scary initiatives that Cloudera is making with CDP is the introduction of variable pricing and a consumption model.

… One is with introduced variable pricing effective in fiscal 2021, that for customers that have NiFi notes, lots of storage or lots of compute, they will have to pay additional charges, none of that in Q4. …

The second thing is CDP Public Cloud will be priced on a consumption basis. That is a new offering, what can — very little was sold in Q4 as that was primarily focused on customer trial and adoption.

While I would normally applaud this move, the timing is unfortunate. Consumption-based revenue is not the way to go during this pandemic and expected global recession which could last longer than most people expect.

There are numerous techniques for valuing stocks. Some analysts use fundamental ratios such as P/E, P/S, EV/P, or EV/S. I believe that one should not employ a simple ratio, and the reason is simple. Higher growth stocks are valued more than lower growth stocks and rightly so. Growth is a significant parameter in discounted cash flow valuation.

Therefore, I employ a technique that uses a scatter plot to determine relative valuation for the stock of interest versus the remaining 152 stocks in my digital transformation stock universe. The Y-axis represents the enterprise value/forward sales, while the X-axis is the estimated forward Y-o-Y sales growth.

The plot below illustrates how Cloudera stacks up against the other stocks on a relative basis. 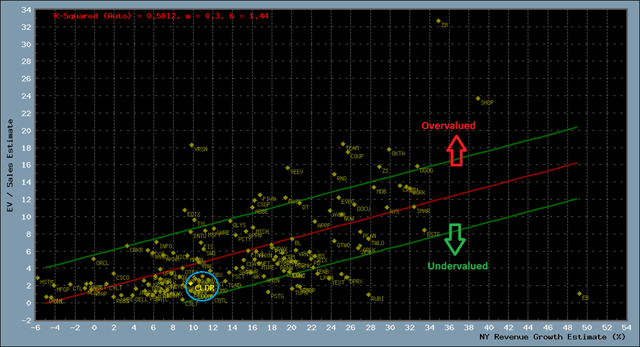 A best-fit line is drawn in red and represents an average valuation based on next year’s sales growth. The higher the anticipated revenue growth, the higher the valuation. In this instance, Cloudera is situated well below the best-fit line. This suggests that Cloudera is undervalued on a relative basis. The undervaluation is likely due to the company’s problems such as post-merger sales execution. These are problems still fresh in investors’ minds.

Cloudera is still struggling to come back from sales execution issues after the Hortonworks merger. They have installed a new CEO that is probably the best fit they can find given the situation. I have doubts about Cloudera’s future. The company is operating in an extremely competitive market and its future is very much dependent on its next-generation product CDP. It is still too early to verify whether or not CDP will be successful. My own observation is that the trials given to handpicked customers may not be going as well as Cloudera would like, with only 12 of 20 still continuing with the trial. This could get worse with the pandemic and lockdown happening in various places in the world. Spending is tight and data management may not be on the minds of most C-Suite managers. I am not impressed by Cloudera’s target revenue growth rate of 10% per annum nor the company’s claimed ability to achieve the Rule of 40. It is a nice thought but I don’t see it happening. It is just a sales job by the CEO. For these reasons, I am giving Cloudera a neutral rating. This being said, if you are truly a fan of Cloudera, the stock price is certainly undervalued. Buy stock at any time.