With the rest of the economy, the entire dealership space is going to take a massive hit from the COVID crisis. Used and new car prices are plummeting and sales across dealerships are expected to be worse than the 2008 subprime crash. Some smaller dealerships would probably end up going out of business and other large public dealership groups will struggle throughout this environment. CarMax (KMX) is best positioned to take advantage of struggling dealerships by taking up their market share. The company’s balance sheet strength, sourcing, pricing and operating capabilities will aid the firm to emerge stronger from the COVID crisis and the shares will eventually trade back up to $95-$100 range (30-35% upside), by the end of 2020.

In my previous article on Lithia Motors (LAD) and Group 1 Automotive (GPI) – here, I’ve emphasized the attractiveness of the parts & service business in a low/negative growth environment. Unlike Lithia and Group 1, CarMax primarily sells used cars (retail/wholesale) and generates negligible margins from part and service, which tends to be countercyclical (non-discretionary spend) that provides enough cushion in a downturn. Relative to parts & service, used cars business is cyclical and based on consumer’s discretionary spend. However, compared to new car sales, the used car business is less sensitive to economic cycles. For instance, I mentioned in my previous article that “used cars offer a relatively countercyclical safe harbour from the dramatic sales highs and lows seen among new vehicles, with peak-to-trough declines averaging about 11% over the past two decades, compared with 23% for new ones. Historically, used-car sales have had less volatile reactions to market shocks, such as the 2009 recession” (McKinsey).

Compared to the ’08 crisis, I think that the auto sector recovery from the COVID storm will be gradual and slow, as we move past these lockdowns. Based upon recent events, I think it will most likely be a “U” or “W” shaped recovery, W being continued lockdowns, corporate bankruptcies and high unemployment rates. At this point, the probability of a W shaped recovery seems more likely because consumers would be reluctant to travel or go out as much, at least for some period of time. A lot of individuals have already lost jobs, and with the unemployment rate at 4.4%, things are expected to get worse. This will affect demand for automobiles as commuter miles decline throughout the end of 2020. A graph from Barron’s shows that commuter highway miles driven in March were “equivalent to roughly 1985 levels”.

With lower miles driven, there will be huge declines in used and new car prices, inflicting a blow to car manufactures and automotive dealers. Cox Auto says that “Used retail vehicle sales were down 50% year-over-year on Wednesday, which was an improvement from the 67% year-over-year decline at the end of March”. 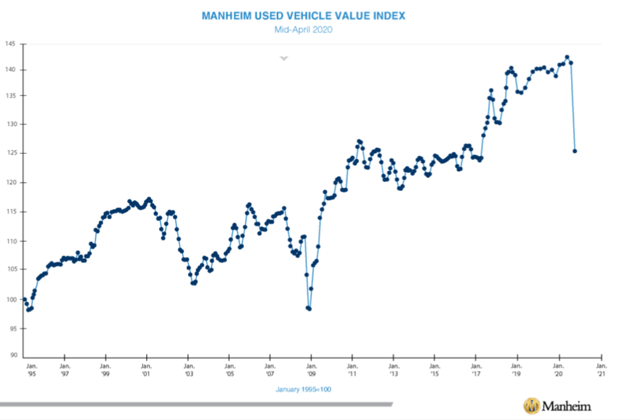 The used vehicle index dipped 9.6% from April 2019 to 125.2. If this value holds for the rest of April 2020 (which is likely to happen), the monthly decline will set a new record that is higher than 5.5% in November 2008. With an expected influx of off-lease vehicles this year, there will be further declines in retail and wholesale used car prices.

Pure-play used/new car dealers without parts & service segments will experience sales declines and increased supply could lead to further price declines until 2020. However, CarMax is well-positioned to navigate through this environment and it will emerge stronger from this crisis due to its solid balance sheet, liquidity position, scale economies, industry consolidation and the company’s sourcing and pricing capabilities.

Why CarMax is Well Positioned To Get Through COVID Mess

Since 2010, CarMax revenues grew at a 9% CAGR up until 2019. It’s pretty solid growth in an industry that is highly competitive where margins are squeezed due to competition. CarMax’s scale not only allowed it to price its vehicles efficiently but the firm also has customer-friendly practices. For example, at other competing dealerships, sales employees are trained to focus on selling vehicles that have the highest margins, instead of selling cars that the client actually wants. Whereas, CarMax doesn’t encourage those practices and employees receive the same or fixed commission regardless of what they sell. The company won’t disclose the profit to the salespeople from the vehicle sold. In addition to that, the customer stays with the same sales employee throughout the transaction, instead of being passed off to another department. The company achieved scale not only through its high-quality customer service but also through passing operating cost savings to customers through price reductions instead of seeking higher margins. This type of competitive pricing allowed CarMax to achieve higher sales.

CarMax appraised over 25 million vehicles and sold more than 8 million used vehicles. The company has in-house pricing and appraisal data that goes back to 1993. This data allows the company to price its auction (wholesale) and retail cars more competitively. The pricing algorithms helped the company to retail more than 99% of the vehicles, besides having one of the highest gross profit per retail used unit of about $2,200 on average, in spite of declining prices across the industry. The firm’s pricing data remains a key differentiator and competitors cannot access this information. Furthermore, the company uses a single-flow (production line) reconditioning process, popularly known as Toyota operational expertise. This method lowers reconditioning costs per vehicle and increases efficiency, thus, maximizing gross profit per vehicle sold.

Unlike other automotive dealers that primarily rely on auto manufacturers’ finance arms, CarMax’s finance arm – CAF – issues loans to 40% of retail customers on average and sells these loans to an SPE. The company then uses the proceeds for CAPEX, buying inventory, etc. The SPE reduces debt since it’s an off-balance sheet item and frees up cash for the company.

CarMax’s wholesale business only contributes 16-17% of the gross margins, but it’s the third largest auction company in the US. Holding auctions at least four times per month gives the company some insight regarding its retail used car business. In addition, sourcing and pricing capabilities aided the company to sell 95% (on average) of the vehicles at the auction, relative to other large auction firms that only sell about 60% of the vehicles (Morningstar.com). The company’s sourcing and pricing capabilities are reflected in the revenue and cost of sales growth rates (almost perfect correlation), which aided the company to maintain stable gross margins even during the ’08 recession. Thus, providing flexibility in good and bad times.

As of March 31st, the company had $700 million in cash with $300 million remaining on the revolver. CarMax doesn’t have any significant maturities in the near term. With close to $1 billion in cash, the company can easily cover its interest payments, capital expenditures and working capital requirements. Also, the company can easily refinance the debt considering it has $1.8 billion worth of real estate (book value) and it’s sitting on $2.8 billion worth of inventory.

The management also said that it’s expected to halt all new store openings, real estate acquisitions and remodelling costs to save cash. This should bring down Capex to $150-$200 million range, from $300 million last year. In regards to working capital, the largest accrual item that ties up cash is auto loan receivables originated by the CAF segment. “The majority of the auto loan receivables serve as collateral for the related non-recourse notes payable of $12.54 billion as of February 28, 2019, and $11.64 billion as of February 28, 2018”. Clearly, the company receives cash early on since these loans are securitized and sold to an SPE. Lastly, higher fixed to variable costs (operating leverage) maximizes operating margins in good times but also magnifies loses in bad times. Over the past three years, CarMax’s degree of operating leverage (DOL) was close to 1. This shows that the company has a flexible cost structure and has the ability to cut costs quickly as a response to declines in revenues.

Other than store occupancy costs, remaining costs look largely variable. This provides more ammunition for CarMax to navigate through 2020.

CarMax would mostly likely increase market share coming out of COVID. Evidence shows that the firm gained market share year over for retail and used vehicle segments (highlighted below).

Income from the CAF (finance segment) business can cause big swings to the bottom line. Historically, 30-40% of retail units were financed (penetration rate) through CarMax’s finance arm and CAF income accounted for 3-5% of managed receivables, over the past 10 years. Except for ’08 when the firm reported CAF income of only 2.20% as a percentage of managed receivables.

In 2020, declines in CAF income will weigh in on EBIT margins due to lower loans issued, higher default rates, a decline in vehicle selling prices, lower penetration rates, market to market write-downs on securitized receivables, higher funding costs, higher 90/60 day delinquencies rates and the list could go on and on. But looking at the ’08-’09 figures, there was a 10x jump in CAF income and the income as a percentage of managed receivables also doubled (2.20% vs 4.30%). Although I don’t expect a sudden recovery, I think that in FY’21 margins will recover back to normal as the company will emerge with a stronger market position from this crisis.

To sum up, used retail and wholesale vehicle market will see a decline in sales and prices, higher than ’08 and ’09. CarMax’s balance sheet strength, operating, sourcing and pricing expertise gives the company an edge compared to other large incumbent automotive dealers. The small dealership space will definitely struggle to keep up during these uncertain times and CarMax’s scale and pricing capabilities should allow the company to emerge from the crisis stronger, with increased market share. When the market eventually realizes this, expect the stock to trade back to it 2019 highs – $90 to $100 range (40% upside) – by the end of 2020.

Disclosure: I am/we are long KMX, LAD. I wrote this article myself, and it expresses my own opinions. I am not receiving compensation for it (other than from Seeking Alpha). I have no business relationship with any company whose stock is mentioned in this article.

Additional disclosure: Initiated position on April 3rd at $48 per share.