History repeats itself. This is often heard pretty much everywhere, financial markets being no exception. We look at history to make better decisions about the future as our ingrained optimism reminds us that things get better after every adversity.

Canada’s S&P/TSX Composite index is now up almost 26% after touching a low on March 23rd (closing basis) when it was down 37% from the Feb 20th peak touched before the COVID-19 fears swamped the global financial markets. With the recent gains, investors will again be weighing the trade-off between the fear of missing an opportunity and the risk of losing money.

This pattern is nothing new as markets rarely rally in a straight line. In his latest memo, billionaire investor, Howard Marks of Oaktree Capital talks about how comeback rallies and pullbacks have been a hallmark of the Dotcom Crash of 2000/01 and Global Financial Crisis of 2008/09. He presented the following data to drive home his earlier message that “Investors should have some money left (and hopefully the nerve) to buy more” if markets reverse course and go down further.

Lets compare the performance of Canadian stocks after COVID-19 peak by re-tracing previous major crashes in history like the Black Monday of 1987, the Dotcom Bubble Burst of 2000 and lastly the Global Financial Crisis of 2008.

In Canada, the S&P/TSX Composite lost 11% on Black Monday and another 7% on the day after, cumulatively losing 21% over eight trading days. However, the market gradually recovered most of the losses by April 1988 as initial fears of a steep recession were unfounded.

At this point, one would be thinking if comparison of a very severe public health shock like COVID-19 with just a blip in history like Black Monday 1987 makes any sense at all. This is certainly true as there is no comparison of the level of fear and volatility between the two. 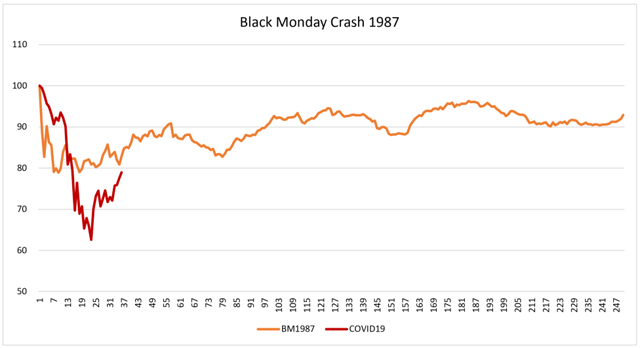 Lets turn to the Dotcom Crash of 2000/01. Canadian stock market peaked some time in mid-Oct 2000 and then slumped 16% by end of Nov 2000. This was followed by two failed rallies in Dec 2000 and Jan 2001 and a 20% slumped from Feb 2001 to early Apr. The market rallied again from April to May 2001 and then eventually succumbed to a 22% sell-off over the summer until 9/11 impact kicked in. Dotcom Crash was a period of a slow, extended market collapse, nothing compared to the level of fearful, frenzied meltdown seen now as COVID-19 has brought economies to a standstill with a heavy toll in terms of lost human lives, not just lost economic output. 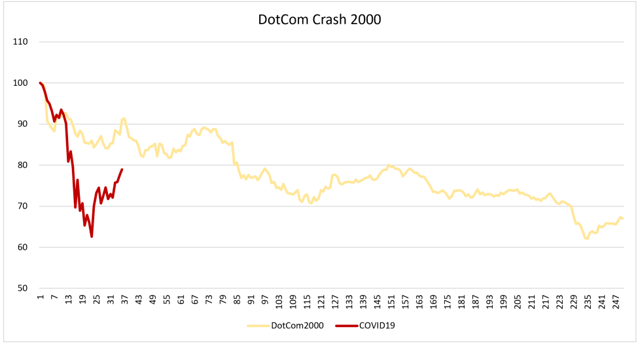 The last major market stress period in living memory is the Global Financial Crisis of 2008. Having lived through that, I can certainly recall that the fear of loss of livelihood was very real and widespread across the globe during those days.

Conveniently using the date of Lehman Brothers bankruptcy on Sep 15, 2008 to mark the timeline, we can see how bear rallies were a recurring feature after the first 33% market collapse in the initial 30 trading days.

S&P/TSX Composite index is eerily tracing a path similar to 2008 in the COVID-19 crisis. The difference this time is the speed and volatility of market moves because this is the first global financial crisis of the smartphone age. In terms of human tragedy, COVID-19 shock is also underscored by a fear of large-scale losses of lives, not just livelihood and wealth. 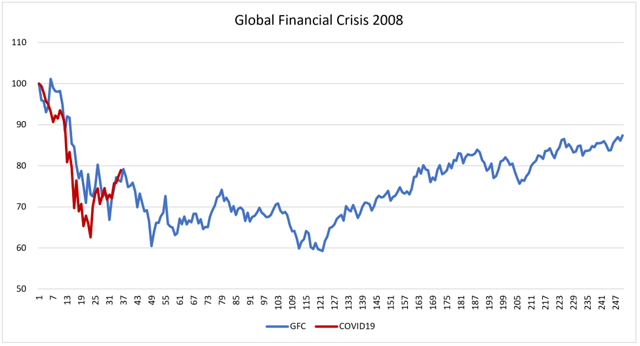 A cursory look at the financial crises of past shows that investors should be prepared to see their gains evaporate quickly. However, each market pullback offers another opportunity to build onto investments positions. The best strategy in markets which are attractive on valuations but poor in confidence is to deploy yourself gradually at each pull back i.e. a typical dollar cost averaging strategy but with a much squeezed timeline of weeks rather than months. Finding the market bottom is a futile pursuit because it is only found in hindsight.

The bottom line for me is that i’m not at all troubled saying (a) markets may well be considerably lower sometime in the coming months and (b) we’re buying today when we find good value. i don’t find these statements inconsistent.