Investors’ dour disposition may reflect anxiety ahead of a busy week for corporate earnings report that look set to paint a bleak picture of the damage wrought by the coronavirus outbreak. Perhaps most worryingly for cyclical assets like stocks and commodity-linked currencies, early signs of stabilization in the Covid-19 infections tally may be shifting the markets’ focus to the outbreak’s long-term economic impact. 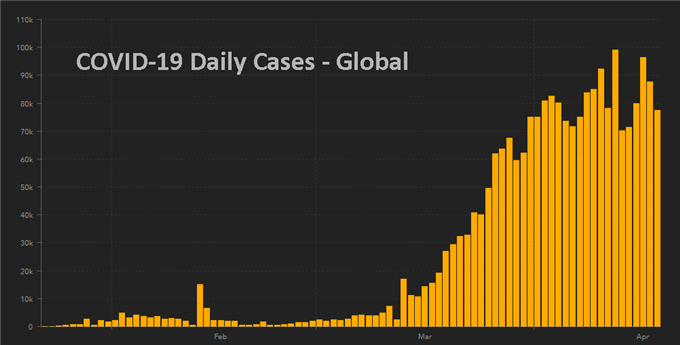 Leading PMI data suggests the outbreak has triggered a dramatic collapse in economic activity to a degree unseen since the 2008 global financial crisis. Restoring lost capacity will almost certainly take longer than it took to lose it. This probably means that risky assets have face a lingering threat of liquidation even as the pandemic appears to lose a bit of momentum.

First-quarter results are due from key consumer names like Coca-Cola and Hershey, manufacturing giants like Lockheed Martin and Alcoa, tech issues like Intel and Netflix, as well as transport sector benchmarks like Southwest and Union Pacific. For the 10 percent of the S&P 500 that have already reported, Q1 earnings have surprised on the downside relative to baseline forecasts by nearly 12.6 percent.