The CAD/JPY currency pair, which expresses the value of the Canadian dollar in terms of the Japanese yen, is one of the more volatile FX crosses, which has proven to be case recently. The chart below illustrates recent CAD/JPY price action, which follows a sell-off in global equities, as well as a crash in oil prices.

The rapid downside volatility resulted in CAD/JPY dropping from just under 85 to briefly under 74 in a matter of less than three weeks (a drop of about 13%). Oil exports are important for Canada, as illustrated in the chart below which illustrates some of the country’s key export categories.

(Source: The Observatory of Economic Complexity)

Also, since the oil industry is important to Canadian industry and, therefore, to the domestic economy (including macroeconomic indicators: employment and inflation), a reduction in oil prices can threaten significant numbers of jobs in the country. Indeed, fuel and electricity production (i.e., the country’s energy industry, including conventional oil and gas production) contributed to about 10% of Canadian GDP in 2012 (see below).

It is natural for the Canadian dollar to weaken on the back of reduced oil prices, and unfortunately, WTI crude oil (serving as a proxy for the North American oil market) remains in the doldrums around $20/barrel. The sharp decline is owing to the COVID-19 crisis, as government interventions consisting of business lockdowns and social distancing among individual consumers have led to a sharp decline in fuel demand.

It is going to be extremely difficult for the Canadian dollar to rally if oil prices remain muted. For the time being, we should expect to see CAD fall against risk-off currencies such as JPY. The Japanese yen is finding strength as Japanese investors find themselves in an environment in which it no longer makes sense to extend funds overseas to acquire risk assets such as equities, or even bonds (since global rates have plummeted).

Therefore, the macro picture should continue to look fairly bleak in the short term, and new lows for CAD/JPY are likely before the pair is able to retrace significantly higher. It is also unfortunate that the Bank of Canada effectively had the highest prevailing interest rate going into this crisis, among the G10 nations. In response to the current crisis, rates were slashed all the way to +0.25% from +1.75% between January and March 2020.

These interest rate cuts sum to one of the largest “negative deltas” in central bank rates among G10, and hence, the attractiveness of holding higher-yielding Canadian dollars vanished alongside the pressure owing to collapsing oil prices. As the chart below indicates from the Commodity Futures Trading Commission’s weekly Commitments of Traders report, speculative short positions are only just beginning to mount (the most recent weekly data was released on April 10, 2020). 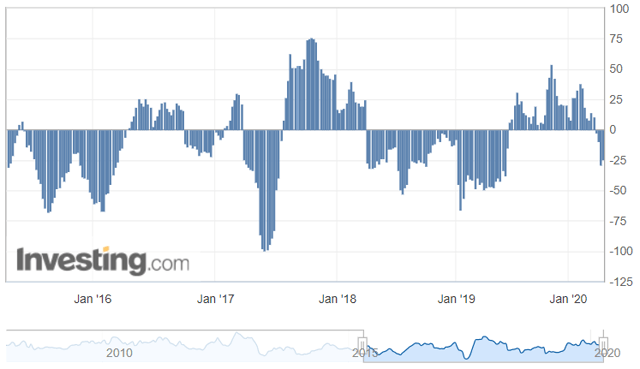 We should expect CAD to continue to fall against JPY for now, as the tide continues to go out. Traders should wait for CAD/JPY to break below recent lows before attempting to pick a bottom. Downside volatility should continue to be expected.