Equities: A relatively lacklustre end to the week with European equities under pressure, albeit recovering off the lows. Across the pond, US equity futures have yet to make up their mind as major bourses trade mixed ahead to the Wall Street open. The EU has continued to kick the can down the road with yesterday’s summit failing to reach a breakthrough, while the failure of Gilead’s drug (not a major surprise) has kept risk on sentiment somewhat contained.

Currencies: Narrow ranges thus far across the FX space in Europe. Germany’s IFO survey crashed to a record low, however, this was largely to be expected given yesterday’s capitulation in the PMI data. As such, the impact on the Euro has been very muted. That said, we look to Bund/BTP spreads as a sentiment tool for Eurozone risks.

Brexit: This weeks Brexit talks appear to have yielded very little (as to expected) as both parties remain wide apart on key issues. EU’s Barnier stated that there where four areas in which progress had been disappointing. As such, we question that risk premium may not be adequately priced for Sterling and thus leaving the currency vulnerable as the EU and UK continue to lock horns. Eyes on the UK’s response to the recent Brexit talks, which is likely to echo similar disappointment as the EU. Next round of Brexit talks scheduled for the week beginning May 11th.

Commodities: Gold prices have maintained a foothold above $1700 and thus the upside bias remains for the precious metal with a focus on the 2020 peak at $1747. Crude oil futures are up slightly, however, with the fundamentals largely unchanged, downside risks remain.

Looking Ahead: Baker Hughes rig count on tap, while sovereign ratings for Italy and the UK are likely to be the main focus after the US close. 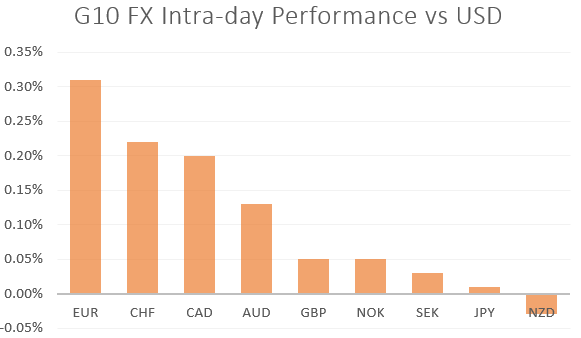