ISM patients are informed to avoid “triggers”, meaning, anything that could exacerbate an allergic reaction (e.g. stress, infection, some medications, insect bites) and, thus, increase mast cell production. Currently, there are no FDA-approved drugs for ISM. Symptoms are addressed as they arise.

Avapritinib is a kinase inhibitor that has been extensively studied in advanced SM & GIST populations. 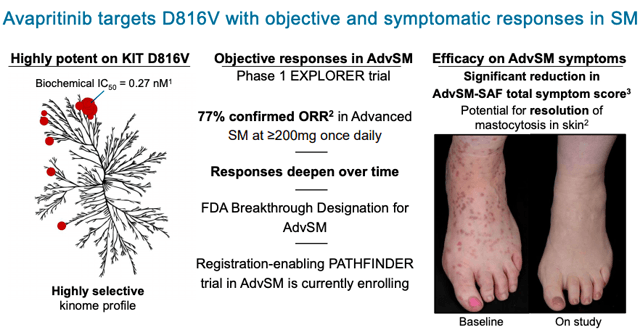 In Part 1 of the PIONEER trial, patients treated with avapritinib showed a statistically significant mean decline of approximately 30 percent in total symptom score at 16 weeks, as measured by the Indolent SM Symptom Assessment Form (ISM-SAF), and reductions in symptom scores have deepened over time. In addition, patients treated with avapritinib achieved consistent improvements across objective measures of mast cell burden and patient-reported quality of life. Avapritinib was well-tolerated with no patients discontinuing treatment due to adverse events.

Blueprint announced PhII data from avapritinib (ISM) data showed drug to be both effective & importantly with a fairly pristine safety profile. This sets the stage for Part 2. Positive PIONEER update should bring investors back on board for ISM, if anyone is paying attention: We believe the Avapritinib update for ISM is a positive for Blueprint. Although, the news could get lost in the volatility of the coronavirus market dynamics. BUY, PT 103.” 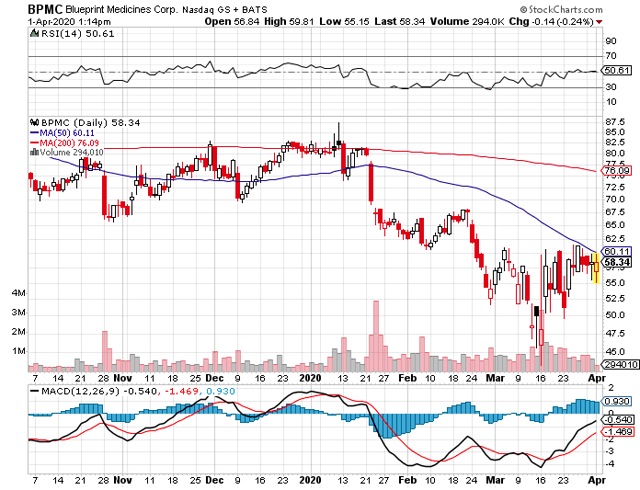 Furthermore, competition exists for the indication. For example, masitinib (phase 3 drug), from AB Science (OTCPK:ABSCF), has shown a lot of potential in SM. Both will likely share the population. On the surface, Blueprint’s avapritinib appears to be a more tolerable drug, fit for long-term dosing that would be likely in a population like ISM.

The company recently conducted a raise in January, which I proposed at the time as being a “necessary desperation” despite the advent of its products to market. Prior to January, their capital structure looked like this: 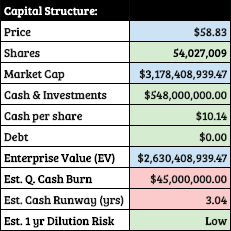 The raise added ~$325M to cash & investments and will, hopefully, be sufficient to avoid having to dilute in the future with the help of avapritinib-related revenue. So, Blueprint should have a cash runway into 2022 even aside from incoming revenue.

SM provides another $1B market opportunity for Blueprint’s avapritinib. Blueprint has struggled in the recent months due to GIST competition (DCPH) and regulatory setbacks, but its conservative $3.1B market capitalization (~$2.4B enterprise value) doesn’t seem to take into account opportunities like the one presented above. Additionally, Blueprint’s library of drugs is bound to make up for any deficiencies that have harmed its stock in recent months. I view these current stock prices as favorable entry points for interested investors and I suspect that stock in Blueprint will bounce back considerably when the overall market wakes again.

Disclaimer: The intention of this article is to provide insight, not investment advice. While the information provided in this article is intended to be factual, there is no guarantee and prospect investors are encouraged to do their own fact-checking and research before investing in a company. One must also consider one’s own financial standings, risk tolerance, portfolio diversification, etc. before making a decision to buy shares in a company. Many of my articles detail biotechnology companies with little or no revenue. These stocks are, therefore, speculative and volatile. Even when prospects seem promising, there is no predicting the future. Losses incurred may be significant.

I present and update my best ideas & biotech research only to subscribers of my exclusive marketplace, The Formula. I also maintain a model portfolio of my top biotech ideas which outperformed the market (XBI, IBB, SPY) by over 16% in 2019! 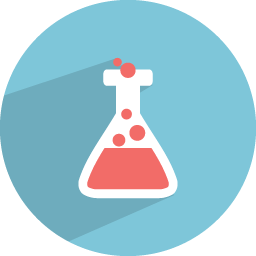 Disclosure: I am/we are long BPMC. I wrote this article myself, and it expresses my own opinions. I am not receiving compensation for it (other than from Seeking Alpha). I have no business relationship with any company whose stock is mentioned in this article.