The firm makes a number of meat substitute products for consumers worldwide.

BYND has grown impressively since its IPO but is exposed to the foodservice segment which has been significantly impacted by the Covid-19 coronavirus pandemic.

I’m Neutral on the stock until we learn the effects of the pandemic on its revenue trajectory.

El Segundo, California-based BYND was founded in 2009 to develop the taste, texture and other sensory attributes of popular animal-based meat products while enabling consumers to benefit from the nutritional value of plant-based products.

Management is headed by Founder, President, and CEO Ethan Brown, who was previously Energy Analyst at the National Governors’ Center for Best Practices.

Beyond Meat has developed three core plant-based product platforms that align with the beef, pork, and poultry meat categories.

The company’s scientific processes determine the architecture of the animal-based meat to replicate and then assemble it using plant-derived amino acids, lipids, trace minerals, and water.

Below is a brief overview video of the Beyond Burger:

BYND’s flagship product, The Beyond Burger, is a 100% plant-based burger sold in the meat cases of grocery stores.

The main factors driving market growth are increasing health and fitness consciousness among consumers due to the growing incidence of health disorders.

Europe dominated the market in 2017, accounting for 38.5% of the total industry revenue.

Major firms that provide or are developing plant-based meat substituted include:

BYND’s topline revenue by quarter has grown consistently over the past five quarters, however Q4 2019’s quarter-over-quarter growth was the lowest in percentage terms:

Gross profit by quarter has also grown sharply, but that growth has tapered somewhat in Q4 2019: 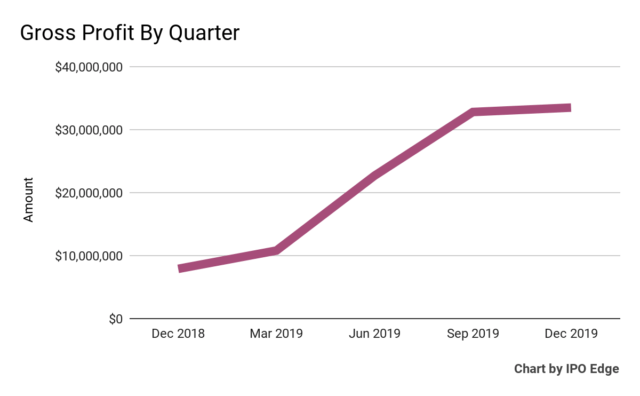 Operating income by quarter has improved markedly, as the chart shows below: 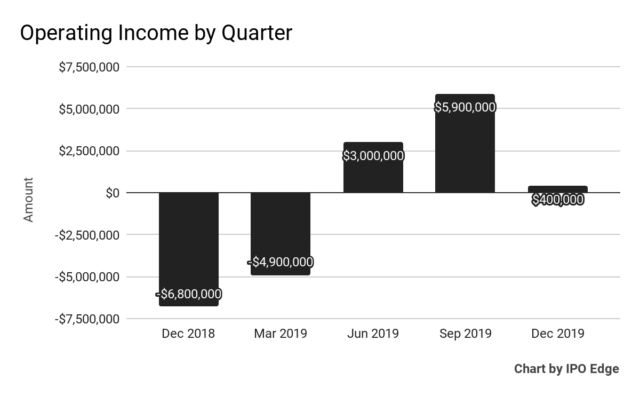 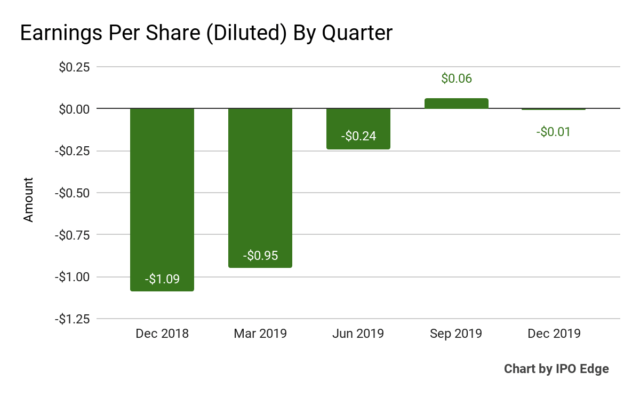 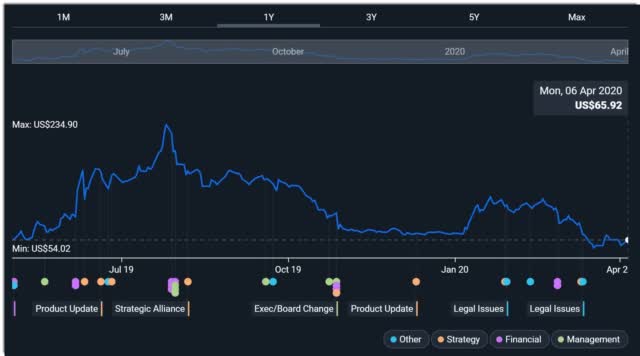 Below is a table of relevant capitalization and valuation figures for the company:

In its last earnings call, management highlighted its flagship Beyond Burger as now being carried in almost all major supermarket chains in the U.S.

But, it is this foodservice piece that appears to be dragging the stock down, at least as far as major analysts such as JPMorgan and Goldman Sachs are concerned.

The negative is that 51% of BYND’s revenue now comes from foodservice distribution, which due to the coronavirus pandemic is now under significant threat in the near-term.

Beyond Meat isn’t alone, as other so-called ‘consumer story stocks’ with IPOs in the last year have sold off in the pandemic’s trashing of the stock market.

Notably, however, these story stocks have the potential for quick upside if the pandemic is seens as under control or not having the level of impact previously feared.

As to its financial results, BYND’s trajectory has been impressive across all major metrics.

With a stock ‘bubble’ high price of $234.90 in its 2019 history, investors aren’t likely to see that print again any time soon.

However, the trend toward healthier, meatless products by younger demographics will likely not change as a result of the short-term pandemic’s effects, so for the longer term I am bullish on BYND’s prospects given the firm’s successes on its distribution growth.

The stock, however, still appears pricey given the uncertainties around its foodservice revenue trajectory over the near- and medium-term.

Now with a JPMorgan price target of $77, dropped from $108 as a result of foodservice questions, I’m Neutral on the stock at this level until we have greater visibility into this important element of its revenue growth story.

Members of IPO Edge get the latest IPO research, news, and industry analysis. Get started with a free trial!