Over the past few years now, I’ve written about the state of our net international investment position, and I believed that for President Trump to address our trade deficits was absolutely putting us in the right direction. However, it’s like turning around a large ship and would take time. It would also take the overall will of the American people.

This recent episode of dealing with this virus that originated in China, known formally as COVID-19, has totally exposed the US reliance on China for medical equipment like ventilators and supplies like face masks.

In my neck of the woods, we had ad hoc efforts to manufacture face masks using sewing machines. This was back in March. On the first day, they divided up 20 volunteers into 10 who would cut the fabric and the other 10 would sew the masks. At the end of the day, they produced 300 masks. Assuming they worked an 8-hour day, it took 160 hours to produce 300 masks, which comes to about 2 masks an hour. These masks could cost at least $30 each at this rate.

We had to do this because the US no longer produces the supplies we need in scale. We let China do it because they work at substantially less rates per hour. This pandemic has proven we are now far too dependent on them for supply.

There had always been no real economic pain associated with having large trade deficits, as it was simply a deflationary force that facilitated lower-cost goods from medical supplies to clothes to car parts that ultimately helped improve American living standards. Like any Faustian bargain, there would be a price to pay.

Imports And Exports As A Percent Of GDP

Throughout the 1950s and 1960s, imports and exports didn’t play too big a role in the US economy. The US enjoyed a trade surplus during these decades. Upon the closing of the gold window in 1971, things changed. Money and credit grew faster than ever, and so did global trade. A good deal of the increase in imports during the 1970s was on account of both greater imports of oil and higher oil prices. Our exports did manage to keep pace with the increase in imports. Of course, the 1970s would prove to be a very inflationary period where wages could barely keep up with the rising cost of living.

It would not be until the 1980s with the US dollar rally that imports as a percent of GDP would become more than exports.

It was realized that importing goods from countries that had lower labor costs or a weaker currency would prove to be a deflationary force. With that, greater quantities of credit could be issued without the inflationary consequences.

From then on, trade deficits would become a normal part of the American economy. NAFTA was enacted in the early 1990s facilitating free trade with Mexico. Then, by 2001, China would join the World Trade Organization and the flood gates would open up to outsourcing any manufactured good that could be produced over there to be produced over there.

I worked in manufacturing from 1999 to 2004 and saw first-hand the decimation moving production to China would do to our manufacturing base. The Chinese would live in dormitories, work for $50 a month, 12 hours a day, 6 days a week. There was no way we could compete with that, so we didn’t even try. We let them do it.

The initial benefit to this was, of course, lower prices to American consumers.

Here is a chart that shows the inflation index of new cars, with a chart of all employees in the car and parts-making business overlapping:

The initial deflation in cars in the mid- to late 1990s was on account of moving production to Mexico, coupled with general high levels of organic productivity gains at home. It’s the post-2000 drop in employees due to the very fast outsourcing of car parts to China that would prove to be a deflationary force that would last all the way to 2009.

The point I’m making is that there was temptation to “let China do it” in the sense of moving production of the goods we both buy and need – even for goods needed for national security like key medical supplies – mostly to China.

The temptation was lower costs. In return for such a deal, we flooded foreign countries, like China, with US dollars via the trade deficits that they would in turn use to buy US assets. Those assets include US treasuries, real estate, corporate equities and corporate bonds, for example.

The chart above shows the net exports of goods and services. The result of negative trade deficits is more US dollars end up overseas, and it’s those dollars that can then be used to buy US assets.

At the end of the 4th quarter of 2019, the US had a net international investment position of -$10.99 trillion. 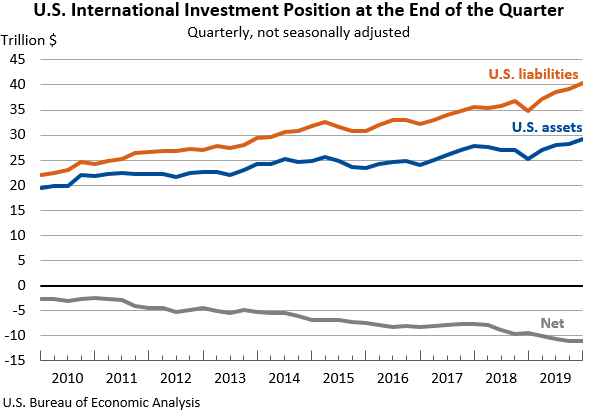 Foreigners own $40.31 trillion worth of our assets, while we own $29.32 trillion in foreign assets.

Of course, these numbers will change with the price of assets in free fall, but there will still be a large difference in how much more foreigners own of our assets than what we own of theirs.

To get a better sense of the extent to which our net international investment position is, it’s best to look at it as a percent of GDP.

Our net international investment position is about -50.6% of GDP as of the fourth quarter of 2019.

Europe has stats of each country’s net international investment position per the chart below. You probably need to click on the chart to see the figures more clearly. What you’ll find is that the range for the net international investment position to GDP goes from as high as a positive 89.2% for the Netherlands to as low as -172% for Ireland. The US has about the same level of NIIP to GDP as Hungary, Poland and Croatia, all hovering around -50% of GDP. 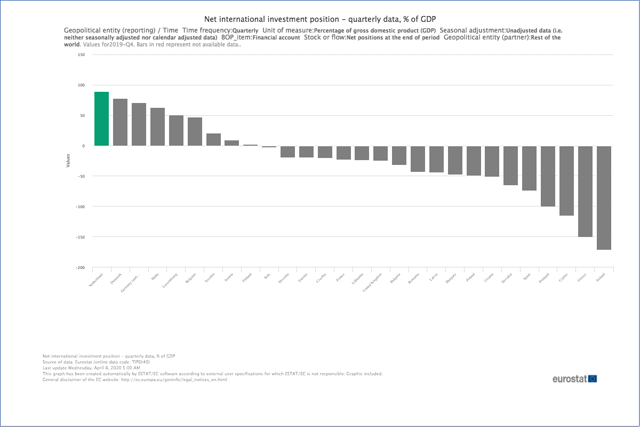 Mercantilism is defined as follows:

The economic theory that trade generates wealth and is stimulated by the accumulation of profitable balances, which a government should encourage by means of protectionism.

Mercantilism has never gone away. America has had trade deficits and has allowed foreigners the ability to accumulate profitable balances for their own wealth accumulation.

The net international investment position is like the scorecard of international trade, and the US doesn’t hold that many chips relative to the chips held by foreigners.

This a problem that I believe will have to be addressed this coming decade, the 2020s.

Working more is by far the biggest way to reverse that state of the trade deficits. We’ll not just need to work enough to provide the net amount of goods and services we ourselves consume, but more to pay for the rental payments, interest and dividends on the foreign-owned assets.

This very issue has been brought up not just in recent years, but recent decades. Warren Buffett wrote an article that was published in Fortune Magazine back in 2003 that preached the same thing I’m preaching here. Seventeen years later and his suggestions to fix the trade deficits have still not come to fruition. Worse, foreigners own a substantially wider margin of our assets over what we own of theirs.

I think it’s important that investors appreciate this dynamic to the state of the wealth of the United States as we come out of this virus pandemic and begin to re-open the economy that will very likely look a lot different than before.

Real growth in the economy will likely, in my judgement, be flat to down in the coming decade as the days of importing our higher living standards goes away.

Having to make masks in a dreadfully unproductive manner could be an omen for what’s to come, especially if foreigners lose confidence in US dollars at their current value.

Be fruitful, produce and profit.