The majority of banks just reported first-quarter earnings and showed little increase in problem loans, non-accruals or charge-offs. Of course, the lockdowns from the pandemic had just started on March 31, too early to see loans even 30 days past due. Normally I would say, it’s too early to see which banks are swimming naked. That is, which ones had loose underwriting during the recent past good times. But this time is different. A little-known government memo issued just a month ago has allowed us a peek.

Banks historically were reluctant to modify loans to borrowers to defer payments for fear they would have to classify those loans as Troubled Debt Restructure (TDR). TDRs require extra capital due to elevated risk. Another reason is deferring payments adds principal (size) to potentially problem loans. That often elevates the problem. In prior recessions, loan deferrals occurred, but not on anything like the scale we are seeing now.

On March 22, 2020, financial institution regulators released guidance in response to the COVID-19 pandemic allowing short-term payment deferrals without classifying the loans as TDRs. Short term is defined as up to 180 days. Normal in the past was one month. Deferrals can be interest only or both interest and principal. As a career banker, and former Bank Examiner for the government, I have never seen anything like this. When I was an Examiner (during the 1990 recession), If we saw this level of deferrals, we would have fallen off our chairs. That said, I am not criticizing the government action. This recession is different, with many businesses not allowed to operate for a period of time, and requires a different measure.

The result was some banks deferred payments on large portions of their loan portfolios, while others did relatively little. In my opinion, both extremes are problematic. Keep in mind, the amount of payment deferrals is the result of two factors: how many borrowers asked for a deferral and how many of those were actually granted. I believe in some cases the banks approached the borrowers too. In my opinion, those that modified over 10% of their loan portfolio are probably revealing higher-than-average problems in their loan portfolios. Some are over 20%. On the other extreme, some banks did little or no loan deferrals. For them, it’s hard to get a read, as they are hiding their problems, while playing hardball with their borrowers. That too may cause more problems down the road.

It should be noted that the loan deferral programs occurred at the same time as the massive Payment Protection Program (PPP) loans. This required an unprecedented mobilization by the banks. Decisions needed to be made on thousands of loans within a few weeks. It required moving numerous untrained bank employees from other departments into lending functions.

The PPP provides forgivable loans to business borrowers with under 500 employees. The loans will be forgiven if employees are kept on the payroll for eight weeks and the money is spent for payroll, rent, utilities or interest. That will be a documentation review nightmare eventually. They were made through the banks, as that was the only practical way to do it quickly. The most important part is due diligence to make sure the businesses applying for the PPP loans are real and actually need it. Banks have already done that due diligence for their existing borrowers. For deposit-only customers, they know how much money they are moving through the bank. While not as good, it’s much more information than the government has. This is partially why many banks granted the PPP money to loan customers first. The other reason is it reduced their number of bad loans. The speed it was done with will undoubtedly result in some fraud. But there is no way the SBA or any other government agency could have done this in weeks. It would have taken several months at the least. The first abuses that have come to light was PPP money to publicly traded companies such as Ruth’s Hospitality Group (RUTH) and Shake Shack (SHAK) with over 500 employees. Both of those have agreed to repay their PPP money.

A Look at Individual Banks

In the chart below, I randomly chose 30 banks and read their earnings announcements and/or conference calls to determine how much of their loan portfolios contain loans with deferred payments. Nine were larger Regional or Money Center banks (assets of $10 billion). This represents a sample of about 20% of all the publicly traded banks shown in Value Line. Value Line provides reports on most publicly traded banks with over $1 billion in assets and a handful under. Some banks have not reported yet, but traditionally, all issue at least an 8-K for earnings by the month end after a quarter end. 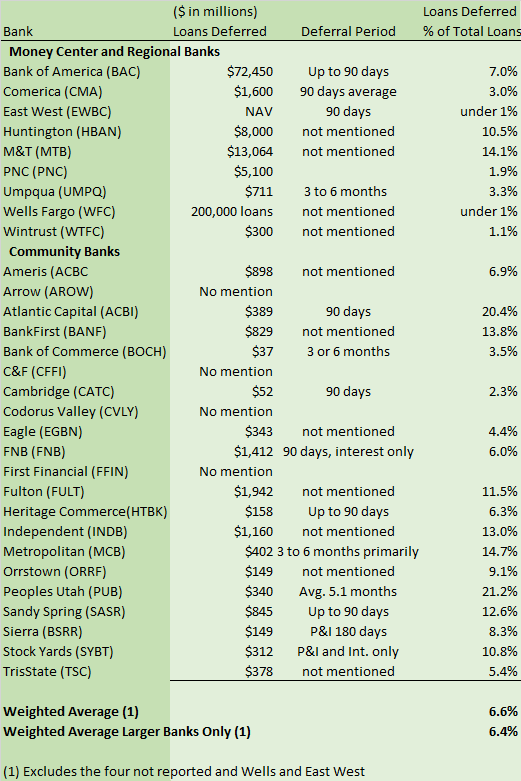 Since this was the first time this type of information was widely shown, I had to look for it in different places. The smaller banks mostly had a paragraph in the 8-K earnings announcements. The larger ones mostly didn’t mention it in the 8-K but talked about it in the conference call. In many cases, it had to be drawn out of them by the analysts. The four community banks that did not mention loan deferrals do not appear to have a conference call. That is OK, but this is too important to avoid disclosing somewhere. If you are a shareholder, I would suggest calling them if they don’t publish it in their upcoming 10-Q. Few have published the 10-Q yet, so there is a good chance it will be there. Overall, the average is about 6.5%. However, I excluded Wells Fargo (WFC) and East West Bancorp (EWBC), as I didn’t have an exact number, just that it appears to be under 1%. Including them would bring the average down to 4.5%.

In looking at the loan deferrals, they were primarily commercial by dollar amount, though all loan types were included. Non-owner occupied commercial real estate where tenants are closed is probably the biggest category. There are wide disparities between individual banks on how many loans payments were deferred, for how long, and which types of loans. If questioned in the conference call, most are saying they are done or mostly done with loan payment deferrals. That indicates the numbers shown above will likely grow a little, but not a lot, for now.

Banks with small percentages modified are clearly playing hardball with their borrowers. Some like Wells Fargo and PNC Financial Services (PNC) refused to modify almost any commercial loans. Wells Fargo also modified few consumer loans. I would have to classify Wells as an outlier – the bank has an awful recent history in taking care of its customers.

For a full discussion of what banks are facing, please see my recent article, “An Insider’s Guide To The Banking Industry In A Lockdown Economy.”

The loan deferral and PPP programs will temporarily mask the amount of problem loans held by banks. Few of those that reported showed a significant increase in problem loans as of March 31, 2020. That is not surprising, because even without these two programs, the lockdowns had only started a few weeks before, if at all. In a recession, banks usually rapidly increase their Allowance for Loan and Lease Losses (ALLL). This time some did and some didn’t. Those who didn’t are living in denial, and even those that did will very likely have to increase more.

In a recession, it normally takes 6-12 months for bad loans to become evident and longer before the peak of loan losses occurs. In this case, with these two programs, we are unlikely to get a real idea of the damage until over a quarter after the PPP and loan deferrals end. Delinquencies and charge-offs will be higher next quarter, but the full damage will be partially masked by these two programs. Keep in mind, the reason mass loan deferrals were avoided in the past is because they often increase the eventual loan loss amount by adding to the loan balance. 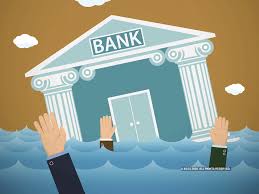 There are numerous businesses that cannot handle a 60-90 day shutdown. Some may never reopen. The amount of uncollectible loans will increase significantly. How much again depends on how aggressive or conservative each bank’s lending standards are. There are crosswinds here. One major trend in commercial lending is a significant reduction in loan covenants banks use to protect themselves. This means they often have to wait until the borrower defaults on a payment before they can take action. That is offset somewhat by the fact that the banks around today have more capital and survived the last recession, which took out those that had the worst lending practices. Bad loans are very expensive in addition to lost principal. They reduce interest income as payments stop, and increase legal fees and management costs.

While the PPP and loan payment deferrals mask the problem for now at our banks, there is a way to see which banks are suffering more. Look at the percent of their loan portfolio that just had loan payments deferred. Just because a bank has a higher number does not necessarily mean their portfolio is above average risk. Some banks appear to have approached their borrowers or be more accommodating. Those that deferred payments on over 10% of their loans probably have a riskier loan portfolio. Those over 20% almost certainly do.

One bank on the list that stands out is People’s Utah Bancorp (PUB). Not only did the bank modify 21.2% of its loans, it did so for a longer period than any other bank I have information for, 5.1 months on average. That is close to max 6 months. A further look at People’s Utah Bancorp shows a very high level of riskier loan types. First of all, its average loan yield was 6.21% on March 31, 2020, well above the national average of 4-5%. Higher yield is usually indicative of higher risk. That may be less of the case in Utah, where many of its community bank peers also have an unusually high loan yield, but its larger peers there don’t. PUB had $277 million (16.6%) of its loans classified under construction and development. That is usually the riskiest loan type in a recession, and it is higher than any other bank I am aware of. It’s even higher than Bank OZK (OZK), which has been criticized for this. PUB also has a high level of non-owner occupied commercial real estate and commercial and industrial loans. Its portfolio includes $246 million (15.4% of total) of retail, hotel, restaurant or entertainment-related loans, some of the most impacted industries. I would recommend selling this stock if you have it.

The next three banks with the highest loan deferral percentages are facing their own issues. Keep in mind that this is a very brief summary, and unlike with PUB not a recommendation, so do your own due diligence. The three are Atlantic Capital Bancshares (ACBI) (Atlanta), Metropolitan Bank (NYC) (MCB) and M&T Bank Corporation (MTB) (Regional-Northeast). Atlantic’s loan portfolio is almost entirely commercial or commercial real estate, with a high degree of commercial and industrial. Business loans are currently much more at risk than consumer. Metropolitan Bank is based in New York City, an area more impacted than anywhere else right now. M&T is also based in New York State and has 36% of its loans there, plus a lot more in New Jersey, which is also heavily impacted by the pandemic.

I strongly recommend you calculate the percentage of loans with deferred payments of the bank(s) you own stock in, if not included above. A higher ratio, while not proof of problems to come, may indicate significantly higher risk.

Disclosure: I am/we are short PUB. I wrote this article myself, and it expresses my own opinions. I am not receiving compensation for it (other than from Seeking Alpha). I have no business relationship with any company whose stock is mentioned in this article.