American National Bankshares (AMNB) is a small (~$230 million market cap) community bank with 28 branch locations in 10 different markets across central Virginia and North Carolina. Despite its relatively diminutive size (~$2.5 billion in assets), AMNB has been in business for over a century – 111 years, to be exact. The bank seeks to excel in customer loyalty and relationship-based financial services, and it boasts a net promoter score of 13 to prove its effectiveness in this regard.

(The net promoter score, which ranges from -100 to 100, measures customers’ likelihood to recommend the bank to others. Positive scores indicate more “promoters” than “detractors.” Most banks have negative net promoter scores. Even the most well-respected banks only score in the teens, for the most part.)

The bank is mostly an old-fashioned savings and loan institution, with only 16.9% of operating revenue coming from non-interest income (mainly wealth management). At the end of 2019, AMNB enjoyed a net interest margin of 3.63%, compared to the average for all US banks of 3.31%. Meanwhile, the bank’s efficiency ratio (cost of operating revenue) of 57.26% is slightly below the national bank average of 57.42%.

In April 2019, AMNB closed on the acquisition of another community bank, HomeTown Bankshares, that expanded its presence in the greater Roanoke area of Virginia. The bank is also actively expanding in the tech-heavy Research Triangle in North Carolina.

This needle-moving acquisition did take its toll on earnings last year, though. Net income fell 7.5% from $22.6 million in 2018 to $20.9 million in 2019, largely due to the $11.8 million of acquisition-related expenses. Falling interest rates may also have played a factor in this drop.

But the bank has been proactive in combating low interest rates over the years through various growth projects that have borne fruit. Net interest income and net income have both risen meaningfully since before the Great Recession:

Plus, with the Federal Reserve pushing the Fed Funds rate to zero this year, interest costs will fall this year, which should relieve some rate-related pressure on the NIM. In 2019, the interest rate for total deposits (including non-interest paying) was an ultra-low 0.64%, but that number will drop even more this year.

Meanwhile, in 2019, the yield on net loans (including provisions for losses) stood at 4.24%. The yield on gross (total) loans was 4.86%. That number will most likely fall in 2020 as well as the bank is hit with a wave of refinancings, but so far, mortgage rates are only a little lower than the low hit in 2016. The 30-year mortgage rate, for instance, is only about 20 basis points lower than the 2016 low.

In 2015, non-performing assets as a percentage of the total stood at 0.48%, which is already quite low. In 2019, that number had dropped to 0.15%, indicating extremely few loans that are not being repaid. Non-performing assets to total loans and owned real estate (probably a better metric to gauge loan quality) is only slightly higher at 0.23%. Net charge-offs have been virtually zero for the past five years, never rising above 0.08%.

Most (81.5%) of AMNB’s loan book is in residential and commercial real estate, while commercial (small and mid-sized businesses) accounts for 18% and consumer makes up a tiny 0.59%. I like to see that the average yield on total loans rose even from 2018 to 2019, when interest rates more broadly were falling. 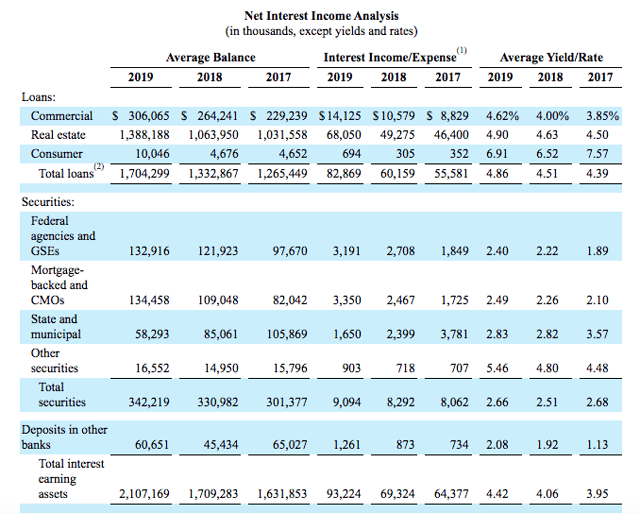 By both price-to-book and price-to-tangible book value, AMNB is currently cheaper than it was even during the Great Recession.

By price-to-earnings, the stock is around as cheap as it got during the Great Recession, though not as cheap as it was in 2013, when earnings growth far outpaced the rise in stock price.

Of course, the bank is cheap for a reason, as are almost all banks right now. The question is whether the selloff has been adequate to make the stock attractive in the face of the headwinds it will face in the years ahead. I think it does, or at least it establishes an adequate margin of safety.

The dividend payout ratio, based on earnings, has consistently hovered around 50% in recent years. During the Great Recession, it spiked up into the 80%’s, and the dividend remained flat for several years thereafter while the bank recuperated.

The dividend is even better covered by free cash flow, with the cash payout ratio over the past twelve months at 37.6%.

Though the dividend has grown slowly over the years, it has not needed to be cut through the past two recessions, and I hope the same will hold true for the current recession.

Personally, I would much rather see slow dividend growth backed by quality assets than speedy growth from lower-quality assets that eventually results in a dividend cut. The 4% hike this past year was the largest since the mid-2000s. Over the past ten years, growth has averaged 1.23%, including several years of flat dividends. Over the past five years, dividend growth has averaged 2.5%.

At the current price of $20.75 per share (as of the time of this writing), the starting yield is 5.2%. If the dividend continues to grow at 2.5% per year on average going forward, the yield on cost after a decade would reach 6.66%. While that may not be a terribly exciting YoC projection, I view it as reasonable for a relatively low-risk investment in an ultra-low yield environment.

Why choose to invest in a small community bank rather than a huge, nationally branded bank that is in most cities of America? Both have their pros and cons from an investment perspective, just as both have their positives and negatives from the point of view of a landlord or small business owner. Big banks have more resources and can often offer slightly lower interest rates, but you can rarely talk directly to a decision-maker. You likely don’t have one banker that you know by name and who knows you by name. You often can’t get a quote in the next 24 hours or so after you asked for one. You probably don’t get personalized Christmas gifts from the staff of your local big bank branch.

That’s what makes community and regional banks like American National Bankshares special. They are better equipped to foster personal relationships and long-term customer loyalty. I have personally spoken with multiple landlords who prefer working with them over bigger banks because of the small banks’ quickness of communication and availability of decision-makers.

It’s also nice to see company insiders taking pride in their bank through substantial insider ownership of the stock. Directors and officers have been regular buyers of the stock when the price slumps: 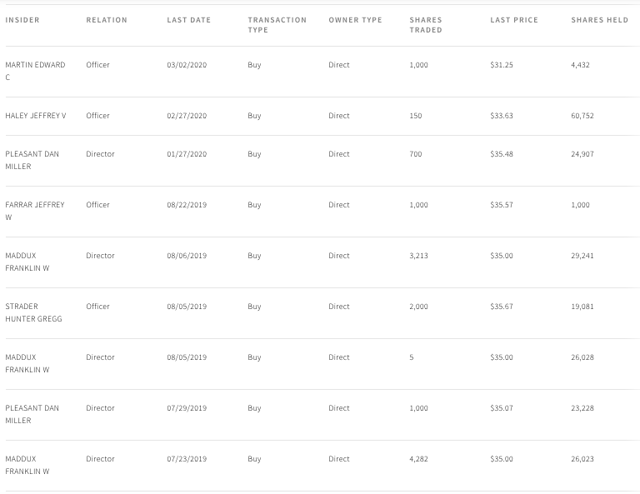 Today, the price has fallen much further than the last few open market purchases. It’s always nice to be able to pick up shares at below the price paid by insiders, as long as one believes the business prospects have not fundamentally changed.

Of course, COVID-19 has caused a huge change in the economy. Interest rates have plummeted, which will almost certainly lead to a wave of refinancings, lowering the yield on AMNB’s loan book. This is the same situation most savings and loan-oriented regional banks face. If interest rates were to go negative and remain there for any length of time, this would spell disaster for many such institutions. But for now, despite massive money printing and liquidity injections into the financial markets, I don’t see the US plunging headlong into negative territory like other developed markets have. Perhaps I’m wrong. Perhaps the deflationary spiral will continue indefinitely and rates will continue to compress, with the short-end gradually dipping into the negative. That is the biggest risk for banks like AMNB.

An investment in AMNB is a bet against that scenario. It is a bet that, at some point after emerging from the present crisis, the Fed signals that it will be tightening monetary conditions and raising rates. And, of course, it’s also necessary for this thesis that the Fed eventually does tighten monetary conditions again.

If that happens, AMNB will be well-positioned to continue its long-running streak of expansion and dividend growth. It’s a bet (at least a small bet) that I’m willing to make.

Disclosure: I am/we are long AMNB. I wrote this article myself, and it expresses my own opinions. I am not receiving compensation for it (other than from Seeking Alpha). I have no business relationship with any company whose stock is mentioned in this article.