Investors have been peeking out of their turtle shells trying to find value in the stock market rout that has accompanied COVID-19. Amazon seems a clear winner, as the company will be a beneficiary of home isolation policies in many ways. Its e-commerce leadership, cloud computing dominance, and premium groceries through its Wholefoods subsidiary has it well positioned.

As a result, the company’s stock has held up quite well despite the fire selling that investors have been doing to their portfolios.

Interestingly, however, Alibaba (BABA) hasn’t seen the same enthusiasm from investors despite sharing many of the qualities of Amazon. This “Amazon of the East” is trading near 5-year lows based on various valuation metrics with its position in China a likely tailwind since the country has been returning to work faster than other Western countries.

Figure 1 is a year-to-date stock chart comparing the performance of AMZN to BABA. The difference in performance speaks for itself.

All clear on the eastern front?

It is truly terrible to see that both the number of cases and deaths from Covid-19 continue to rise in Western countries as they struggle to contain the virus. It doesn’t even make sense to write the current numbers into this article because they rise on a daily basis and quickly become dated – that’s just sad.

Home isolation and social distancing policies used to contain the spread of the virus have had the knock-on effect of keeping most businesses closed. They are unable to serve their customers, generate revenue, and ultimately pay their employees. The lack of consumer spending and business investment is putting tremendous strain on economies.

But China is already getting back to normal, just consider the headlines:

Indeed, Alibaba and its charismatic founder, Jack Ma, have been taking leadership roles in engaging the battle against coronavirus worldwide. Alibaba, for instance, has been offering coronavirus diagnostic tools to European countries, while Mr. Ma has been donating healthcare supplies around the world including to the U.S. Cynically, it’s smart PR.

Investors should be careful to think that these are signs of a complete “all clear”. Flair ups of the coronavirus may still occur, perhaps caused by asymptomatic carriers or people returning home from abroad.

Also, the second largest economy in the world – still needs the world to sell its products to, so a worldwide downturn will naturally stifle China’s rebound. But investors shouldn’t ignore these green shoots because a re-opened China will give a boost to Alibaba and other Chinese companies.

Alibaba is trading at a 5-year trough based on several metrics, thanks to the COVID-19 market rout. This isn’t too surprising. A market screen would show that most companies are at steep discounts to where they traded over the last few years.

But this isn’t the whole story.

On a Price-to-Free Cash Flow (P/FCF) basis, BABA at 25x is trading at a steep discount to AMZN’s current 36.8x; on a P/E basis, it is 21x versus 82x, respectively. This despite the fact that BABA’s revenue growth is trouncing those of AMZN. Take a peek at Figure 3 to see by how much.

Also, Alibaba could be on the cusp of generating profits from its Cloud unit, which should improve earnings and free cash flow over time further driving down BABA’s multiples.

For the 9M19 that ended on December 31st (BABA’s fiscal year ends March 31st), Alibaba Cloud’s revenues grew by 63.8% to RMB 10.7bn YoY. The unit also generated a -4% EBITA margin. Over the last three fiscal years, this margin averaged -6% for the Cloud unit.

It’s an important improvement especially if we look to Amazon Web Services (AWS) for guidance. Through 2019, AWS brought in net sales of USD 35bn or 12.5% of Amazon’s total revenues, but generated USD 9.2bn in operating profit or 63.2% for the entire company.

If Alibaba Cloud follows the same trajectory and becomes a major profit driver for BABA, as analysts expect, then forward-looking values could improve significantly. But even now, just breaking even wouldn’t take much, particularly with the phenomenal growth rates the Cloud unit has already been achieving. Around the world work-from-home policies are only going to accelerate the move to cloud services.

The value of Ant Financial, Alibaba’s fast growing payment and financial services platform, also goes unreflected in valuations. Alibaba will eventually own a 33% stake in Ant Financial, which could be worth USD 150 – 200bn based on recent media reports. This could mean that an asset of nearly USD 50bn to 66bn is not currently reflected on the company’s balance sheet. 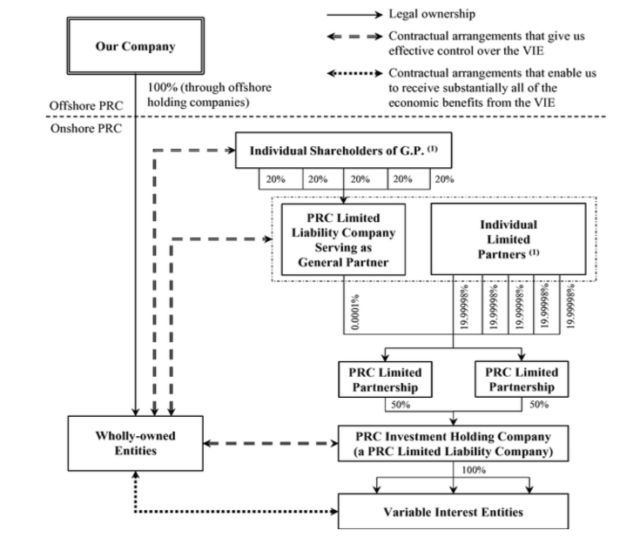 Without getting into the specifics, the structure outlined in Figure 3 was established to allow foreign ownership of a Chinese Internet company. China has determined that Internet companies are of strategic importance so key assets are not allowed to be owned by foreign shareholders.

Alibaba, like Tencent, Baidu, JD, and a host of other Internet companies that have raised capital overseas place the disallowed assets and intellectual property into Variable Interest Entities (VIEs). The VIEs are then locally owned by People’s Republic China (PRC) holding companies, who turn over the economic and voting rights of their ownership to entities that are owned by a foreign offshore company – which raises the capital.

In a kind of “see no evil” pact, the Chinese government has accepted this loophole to give Chinese companies access to the international capital markets. But could China reverse their position in the future? Absolutely. Is it likely? Probably not.

China has been trying to bolster its international reputation and draw foreign investment into the country, not the other way around. Just look at its recent moves to liberalize its financial service industry. For the first time, foreign companies will be allowed to wholly-own financial service companies in China and this is already causing a rash of foreign investment.

Interestingly, questions surrounding these same foreign ownership rules would be the cause of Alibaba’s most significant governance scandal and a key risk in this name.

In 2011, in a surprise move, Mr. Ma moved Alipay into a separate entity that he controlled. He claimed at the time that Alipay was under threat of shutting down because the People’s Bank of China (PBOC) was expected to announce new rules forbidding foreign ownership of payment processors. Suspiciously, the rules never materialized and now seem to be getting relaxed.

Eventually, after a nasty battle with top shareholders, Mr. Ma would arrange for Alibaba to own 33% of Ant Financial. Certainly better than nothing, but far short of the full ownership that Alibaba originally had. Nonetheless, it’s a stark reminder for Alibaba shareholders of the risks involved in holding this name.

I am a long-term bull on China, e-commerce, and the cloud. So when Alibaba shares go on sale after a long bull run, I take notice. Particularly if the near-term challenges are likely to strengthen the long-term fundamentals of a business as the coronavirus is likely to do with Alibaba.

This health crisis will accelerate the pace of e-commerce buying like SARS before it did. It’ll push more people to use digital payment and financial services. Businesses are also swiftly moving to the cloud to give their employees access to computer and database resources from home. And with China reopening faster than other nations, domestic consumption and trade should all benefit Chinese stocks.

There is probably no better company positioned to take advantage of this crisis than Alibaba.

I’m not indiscriminately buying, however, and I’m careful about my overall exposure. Yes, shares are attractive at this point, but global volatility from the coronavirus will create multiple entry points. In fact, when I first started writing this article a few days ago, a share of BABA traded at USD 183 versus today’s USD ~196.

Additionally, poor governance and regulatory risks should keep investors from overexposing their portfolios to BABA. There has also been news that Softbank, a top Alibaba shareholder, is looking to sell USD 14bn worth of BABA shares in a deleveraging scheme.

Alibaba holds significant value at these levels, but investors should be judicious on price and use recent volatility to their advantage. Softbank’s moves may also add pressure to the stock in the short-term, so there really isn’t any need to be rushing to buy BABA. Still, averaging in at these prices will likely represent great value for long-term minded investors.

Disclosure: I am/we are long BABA. I wrote this article myself, and it expresses my own opinions. I am not receiving compensation for it (other than from Seeking Alpha). I have no business relationship with any company whose stock is mentioned in this article.