Adamis Pharmaceuticals (ADMP) has been one of my worst speculative investments and has been a complete disappointment. We have seen Adamis fumble multiple regulatory events, stumble through commercialization, and habitually dilute their shareholders. Now that we are looking at all-time lows, investors need to determine what their course of action is going to be. I intend to review the primary reasons why we are in this situation and how I plan to move forward with my ADMP position.

The company’s flagship product, Symjepi, was the primary motivation for starting a position in ADMP. Symjepi was supposed to be a competition for Mylan’s (MYL) EpiPen and other epinephrine auto-injectors. Symjepi has been a dud so far… it took multiple attempts to get Symjepi through the FDA; it took over a year to find a commercial partner, and another year for full-scale commercial launch by Novartis’ (NVS) Sandoz division. CEO Dr. Dennis J. Carlo stated, “SYMJEPI sales continue to be far lower than we ever expected. We are currently working with Sandoz to determine what needs to occur to accelerate its growth in the epinephrine market.”

I am not sure what Adamis is really expecting Sandoz to do… I was impressed with their ability to get favorable positions on the formularies, but, I haven’t seen any serious attempts at digital marketing for the product. Sadly, most of my Symjepi web searches bring me to my previous Seeking Alpha articles. I don’t expect Sandoz to commit to a large traditional marketing campaign or hire a salesforce to focus on allergist offices. Yes, Sandoz should probably be sending information and trainers to allergist offices and also put some ads in professional periodicals… but the general public needs to know about Symjepi so they can inquire about it with their provider. It is obvious that something drastic needs to happen in order for Symjepi to start gaining some commercial traction.

On the bright side, there isn’t any Symjepi hype left in the share price, so any noticeable uptick in commercial numbers or announcement of a European partnership could generate some optimism.

The company’s next Symject based product, Zimhi, is a high-dose naloxone rescue device for opioid-overdoses. Just like Symjepi, Zimhi has been a rough road for investors as the company fights off reference drug issues and getting the product approved. Back in November, Zimhi received a CRL for minor issues that the company should be able to address. Nevertheless, the CRL was another major disappointment and the share price was obliterated. Now, we are waiting for Zimhi’s resubmission, which is expected in Q2 of this year. If all goes well, we could see a PDUFA date in Q3 or Q4 and a potential U.S. commercial partnership to go with it.

I believe Zimhi is the company’s second chance… Symjepi is turning out to be a commercial dud after multiple CRLs, prolonged partnership negotiations, and overdue launch. By the time Symjepi was available, the hype was gone and ADMP was a playground for shorts betting against management. Zimhi could offer some redemption and hopefully earn back the market’s trust.

The company’s financials continue to be an issue with the company recording another quarter with a negative net income (Figure 1).

The company’s solution to their financial woes is to execute secondary offerings. Adamis has a long record of frequent offerings that have diluted the longstanding investor over-and-over, which provides the company with an infusion of cash, followed by burn (Figure 2).

Usually, I am ok with the secondary offering when it is being put to good use, such as commercialization efforts or supporting promising pipeline programs. Unfortunately, the proceeds from the secondary offerings are essentially being used for paying the bills and payroll. Adamis does have some interesting pipeline candidates and the Symject platform could support additional uses, however, the thin bank account has put most of the R&D efforts on hold. Luckily the company was able to get $3,191,700 under the Paycheck Protection Program “PPP”, so we might not see dilution in the immediate-term.

On the bright side, the company doesn’t have a mound of debt to pay off. This allows ADMP to be a quick turnaround story if the company is able to record revenue growth and break even. Admittedly, ADMP appears to be at least a couple of years away from crossing that line, however, the possibility of positive EPS should help support the share price over the coming years.

Recently, Adamis publicized that US Compounding is now joining the fight against COVID-19 by producing medical-grade hand sanitizers to be used in hospitals and healthcare workers. The first lots of sanitizer will be dispatched to New York, which has been the epicenter for the U.S. COVID-19 outbreak.

It is nice to see the company lending a hand and is making the ethical decision to send the product to where it is needed most. In addition, it is encouraging to see the company find a way to release a positive press release. Indeed, hand sanitizer for the COVID-19 effort isn’t exactly going to be a lucrative venture, but at least we know the company is finding ways to keep busy during this pandemic. What is more, the hand sanitizer production showcases US Compounding’s versatility and value to the company.

“Having said that, the outbreak and governmental mandated social distancing and sheltering in place have caused some near-term impact and disruption to our employees and daily operations. For that reason, and to allow some time to gain additional visibility into the 2020 year, we have determined to postpone our regularly scheduled earnings conference call. My sincere hope is that we can have a more meaningful call in the future and provide a clearer picture of the remainder of 2020 and the outlook for the company.”

Although the statement could be true… I don’t understand why a conference call requires the company’s c-suite to be sitting together. I have recently listened to several earnings calls where the members were not in the same location to ensure social distancing. The lack of a conference call gives the impression the company is avoiding questions about Zimhi’s resubmission, Symjepi’s abysmal commercial numbers, cash runway, and plans for regaining Nasdaq compliance. Investors need to hear management’s plan for remaining listed and fund the company besides dilution.

Valuation has been one of my primary reasons for adding and holding onto my ADMP position. The company’s US Compounding subsidiary has been the company’s silver lining that has reported notable revenue growth over the past year. As a result, the stock’s price-to-sales is currently under 1x, which means the company pulls in more annual revenue than the stock’s market cap (Figure 3). This tells us that ADMP is significantly discounted compared to the industry’s average price-to-sales of 5x. 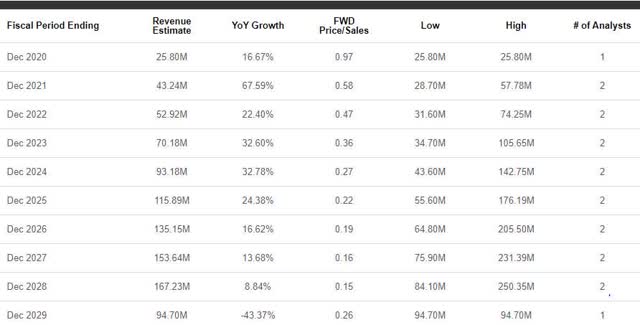 Regrettably, the market has disregarded the company’s revenue growth, due to the company’s mishaps and misadventures. Still, I believe the discounted valuation will eventually provide a bid and form a base of support in the coming years.

Looking at all that information above, it is difficult to see where the company and the stock is going. Do I stay due to valuation? Should I expect Zimhi to be the winner? Loser? Can the company find a motivated partner for Zimhi? What will the company do with their inhaler candidates? Is management going to take the company OTC? Will the market ever trust management? The lack of a clear path or numerous unknowns has me stuck in a traffic circle trying to figure out how to come up with a new thesis.

The company appears to be pointing investors towards Zimhi and the possibility that Symjepi begins to gains some traction, which would suggest the company believes their Symject-based products are the future of the business. Personally, I don’t see developing Symject products to be the answer for the next few years. The company is underfunded and has a terrible track record of getting a product to the finish line. Perhaps it is time for the company to start attempting to license the Symject platform, or finding a development partner to take the reins in the early stages of development. I believe the world needs a simple-to-use and reliable PFS for other emergency/rescue injectable drugs, so there should be some interest in the Symject platform. Unfortunately, I just don’t see Adamis taking advantage of the opportunity without help.

What Would I Like Them To Do? I have three preferences for Adamis. Firstly, sell the company. The shareholders have been eviscerated and it’s time for the company to save its shareholders from a total loss. I understand Zimhi might provide a chance at redemption and could change the fundamentals, but I don’t expect the market to trust to keep their money in ADMP until there is a change at the top.

Secondly, sell or license everything non-Symject in order to free-up cash and focus on Symject activities. The company has some valuable assets to unload including two inhalers that are being mothballed in the pipeline and US Compounding hovering on break-even. Admittedly, this would be a short-term relief from their financial behavior, but it could provide some runway to develop Symject products. A streamlined ADMP with some cash could encourage some new investors to finally jump in.

Thirdly, I would like to see the company merge with a complementary pharmaceutical or biotech company. I am sure there are several private or OTC stocks looking to be listed on Nasdaq that is willing to make a favorable deal with the company.

Overall, I think the company is in need of serious reorganization and needs to refresh. I wouldn’t be classified as a longstanding ADMP shareholder, but I have been invested long enough to have an idea of what the value of the company should be and understand why it is not obtaining its value.

Despite my disgruntled outlook about the company’s past blunders, I am still going to hold onto my ADMP shares due to its discounted valuation and chart technical analysis. The daily ADMP chart looks atrocious and I can only find a few positive signs at this point in time (Figure 4). However, the stock has moved out of its long-term downtrend and was able to weather the coronavirus crash quite well compared to other speculative healthcare tickers. 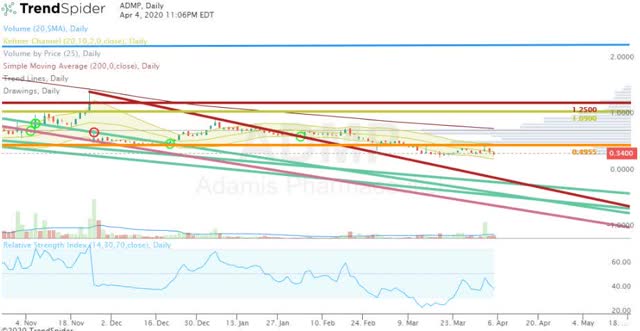 In addition, I would like to point out there is a divergence in the share price and the RSI, which can be a reversal signal. Another positive to point out is the higher volume trading days are mostly green, so there isn’t any mass liquidation occurring during this market sell-off, which I believe indicates seller exhaustion. As a result, I am going to hold on to my shares and will continue to use options until the company is able to get a PDUFA date for Zimhi. Once the company has a new PDUFA, I will start to reload my position in anticipation of an approval and subsequent partnership deal. I still expect to hold the majority of my ADMP for at least five years in anticipation the company can close a few transformative deals to finally return some shareholder value. If Zimhi does not gain approval and/or the company fails to acquire a name brand U.S. partner for Zimhi, I will liquidate my position and never look back.

Disclosure: I am/we are long ADMP. I wrote this article myself, and it expresses my own opinions. I am not receiving compensation for it (other than from Seeking Alpha). I have no business relationship with any company whose stock is mentioned in this article.