As the headlines have made clear, the stock market – and the energy market in particular – are in turmoil thanks to two “Black Swan” events combining to form the perfect storm:

With the combination of declining demand from the virus and the price war, oil producers are faced with a very challenging outlook. In fact, many were overleveraged as it was prior to the oil crash and now their distressed junk rated debt will get even riskier and may send them into bankruptcy.

Now, it’s important to remember that midstream MLPs like those we hold in our Core Portfolio re largely immune to commodity price volatility. For example, 86% of Enterprise Products Partners’ (EPD) revenue is fee based, 4% is commodity price based, and 10% is differentials based. In fact, in its crude business segment, 91% of revenue is fee based.

As a result of its heavy concentration in fee-based contracts, even during past energy price crashes, EPD has continued to generate solid returns on invested capital: 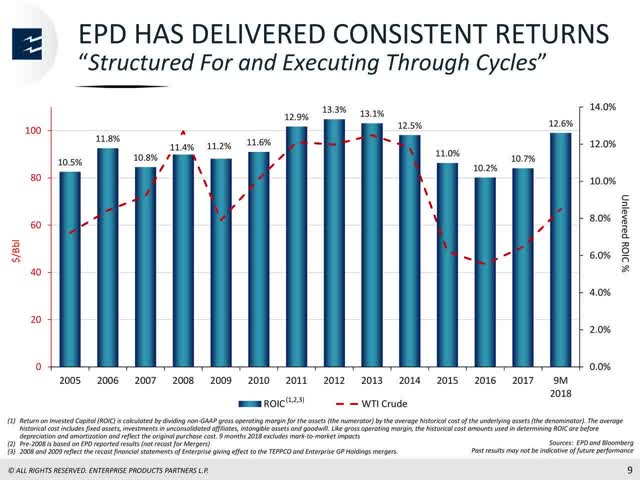 What’s there to worry about then? Well, even though the vast majority of EPD’s contracts are not susceptible to energy prices, its clients are. As a result, for upstream oil producers to stay in business, they could possibly need to restructure their contracts with their midstream partners, resulting in reduced income. Worse still, some of them could go into bankruptcy and default on their contracts, leaving MLP pipes empty.

This is why, similar to REITs, the quality of an MLP’s pipeline “tenants” is extremely important in factoring in its safety. Fortunately for most of the blue-chip midstream pipeline businesses, their upstream clients are largely investment grade. As a result, unless oil prices remain extremely low for a prolonged period of time, we do not see significant risk to their earnings power. To further bolster our conviction, our top midstream holdings also all have investment grade balance sheets. As a result, even if their revenues did decline somewhat from restructured and/or defaulted contracts, they have the liquidity and covenant flexibility to weather the storm.

That being said, we do not expect oil prices to remain subdued long enough for any material damage to be done to our MLP revenue streams and expect dividends/distributions to largely remain intact at firms such as Enbridge (ENB), Energy Transfer (ET), EPD, and even MPLX (MPLX) as their investment-grade credit ratings combine with their strong coverage ratios to leave plenty of leftover cash to cover any short-term declines in revenue.

Why do we remain bullish on oil prices?

While a long-standing deal between oil exporting giants Saudi Arabia and Russia fell apart and quickly spiraled out of control into a fierce price war, there’s some hope of reconciliation.

While there’s speculation that Russia and Saudi Arabia are trying to price competitors – in particular U.S. shale producers – out of the market, others think it’s simply a competition between the two countries to gain market share in the global oil market.

Regardless of which motive is the driving force, Saudi Arabia seems content for now to continue given that they are the low-cost producers, and as such, are widely viewed as the “central bankers” of global oil production. As a result, they can continue to gain market share and put pressure on Russia to concede.

That being said, we believe that this will not become the “new norm” for oil and that the price war will end sooner rather than later for the following reasons:

Therefore, between the United States’ considerable motivation and capacity to intervene and Russia’s limited long-term options, we believe that both sides will be brought to the table before too long.

(2) Fossil Fuels Are an Inflation Hedge

While it is true that OPEC+ seems broken and Saudi Arabia is planning to ramp up its production even as renewable energy sources continue playing an increasing role in the global energy industry, the idea that this poses a long-term apocalyptic outlook for fossil fuel pricing (and therefore for the profitability of MLP’s clients) is overly pessimistic, in our view.

As we pointed out previously, energy has historically served as the No. 1 hedge against consumer price inflation: 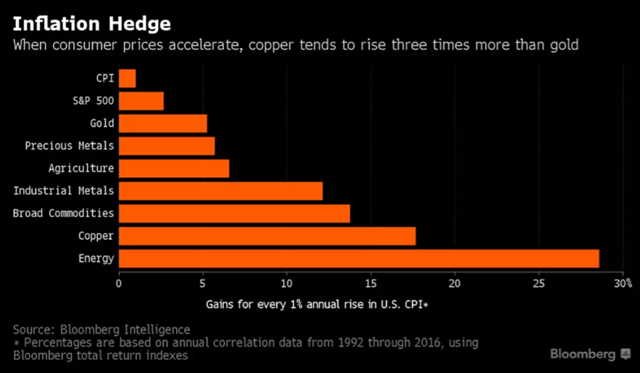 Given the decade plus of easy monetary policy, continued massive government deficits, and the history of fiat currencies (which always eventually get inflated to worthlessness), we believe that inflation is bound to come. When exactly is uncertain, but there are reasons to believe it will be sooner rather than later.

(3) The Fossil Fuel Industry Is Not Going Extinct Anytime Soon

Another point to consider is that roughly half of the world’s oil consumption is for industrial uses that lack a viable alternative source of power beyond oil. The other half is used for gasoline, most of which is in vehicles. 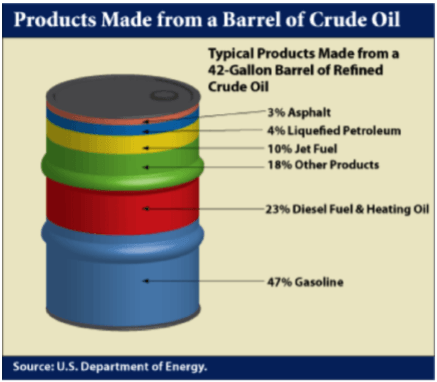 Putting it all together, we get an overall stable to slightly growing demand picture for fossil fuels. Even in an unprecedented worst-case scenario, demand for fossil fuels will likely decline very slowly and even then, not in a way that will cause pricing to crash and bankrupt the industry.

Combining inflationary pressures with stable demand brings us to our third and final reason to be bullish on oil:

With strong growth in developing economies and the accompanying demand for fossil fuels to power everything from rapidly-growing automobile counts to factories, the medium-to-long term outlook for oil demand signals steady growth, especially once global flight patterns normalize. At current pricing, not enough oil can be produced for profit to meet that demand. As a result, prices will have to rise and production will then grow to meet the demand, thereby resolving much of the trouble facing MLPs.

MLPs are selling off due to broader market forces, negative fund flows from energy sector-focused ETFs and mutual funds, and fears that the commodity price crash will result in restructured and/or defaulted contracts between upstream and midstream firms.

While there’s a chance that some revenues could be impacted – in fact ET and Equitrans Midstream (ETRN) recently announced short-term contract restructurings with some of their clients that would be negatively impacting revenues over the next few years – the chance that MLP revenues would be severely impacted even to the point of threatening their investment grade credit rating and/or their distributions is low in our view. Furthermore, similar to what’s happening in the retail space, this trial by fire could actually result in stronger long-term contracts in the sector as the overleveraged and less efficient producers get weeded out through bankruptcy, thereby putting the entire industry on a firmer and more sustainable financial footing.

We believe that – as past history has demonstrated – investment grade, self-funding MLPs are capable of sustaining commodity price volatility without suffering significant dips in revenue. Furthermore, their balance sheets and coverage ratios are in much better shape this time around than they were during the last oil price crash.

In addition to the bullish case for oil prices, we especially like the midstream space over the upstream space because blue chip MLPs are in a superior financial position. Not only are their balance sheets generally in better shape, but their capital spending on growth projects is starting to wind down. As a result, they are either currently or just around the corner from generating copious amounts of free cash flow. This further increases their margin of safety against restructured contracts and also gives them the ability to capitalize on extremely poor market sentiment currently being reflected in their equity pricing.

While it can certainly be terrifying and psychologically challenging to hold on to a position while large-cap holdings like ET lose a quarter of their value in a single day, we believe that when blood is running in the streets from quality businesses like those mentioned in this article, we as landlords continue to focus on the cash flow and hold, if not add, to our holdings. 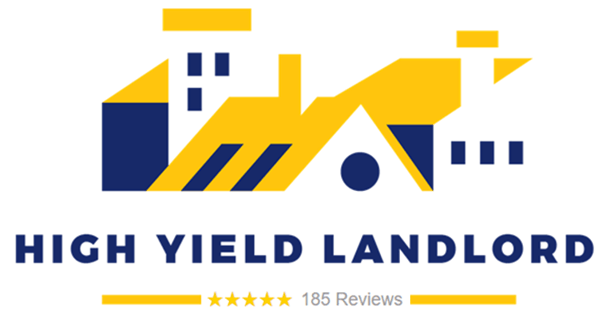 Here at High Yield Landlord, we are loading up on deeply discounted real assets at the moment. Opportunities are abundant and now is time to act while the market is volatile!

We are sharing all our Top Ideas with our 1,500 members. And you can get access to all of them for free with our 2-week free trial!

You will get instant access to our 3 Model Portfolios, Course to real asset investing, Tracking tools, and much more.

We have limited spots at a 20% discount. Get Started Today!

Disclosure: I am/we are long ENB. I wrote this article myself, and it expresses my own opinions. I am not receiving compensation for it (other than from Seeking Alpha). I have no business relationship with any company whose stock is mentioned in this article.