It’s been a hard year for the oil bulls with the United States Oil ETF (USO) sitting on a 65% year-to-date decline.

While investors may be tempted to go bargain hunting in this environment, it is my opinion that we should stand on the sidelines until we see clear fundamental evidence that it is time to buy. At present, this evidence has not yet emerged which indicates that we should be neutral oil at this point.

Let’s quickly run through the supply and demand balance to see where we stand in oil fundamentals.

From a high level perspective, oil inventories are currently lagging seasonal benchmarks like the five-year average. 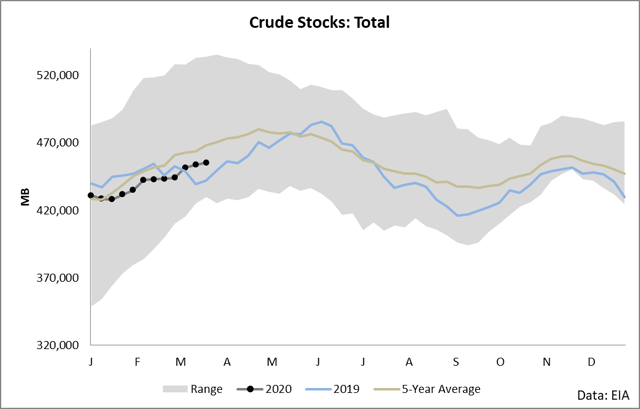 Normally, this would be indicative of general bullishness. The reason why this would normally be bullish is that all else equal, when inventories are declining against the five-year average, it means that demand is surpassing supply and stocks are generally declining. This relationship is clearly established in the data. 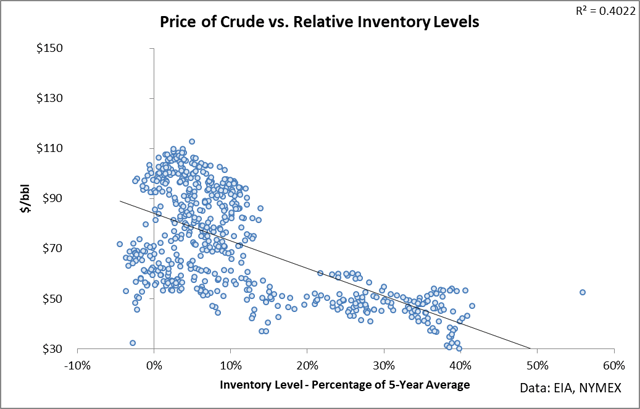 But this relationship really only works in normal times. We are in anything but normal times due to two key shocks heading towards the balance in the coming weeks.

First off, refining utilization has lagged somewhat over the past few weeks. 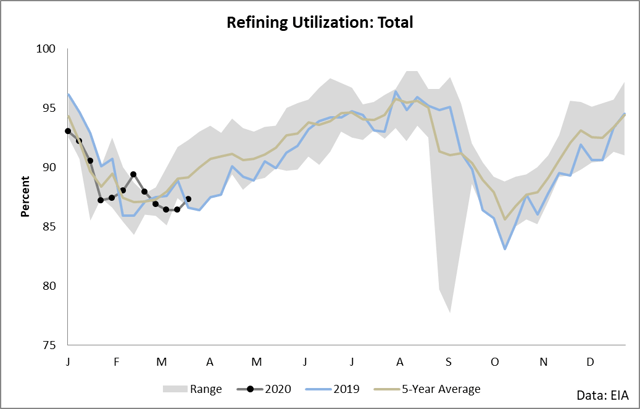 However, this number is poised to collapse as shelter in place recommendations have gone into effect across the country. A simple way of thinking about crude oil is that it is a transportation fuel – if transportation lags, so will crude demand. Given that driving and flying have slowed substantially, we are poised to see one of the largest drops in refining utilization ever seen.

We are already seeing this information reflected in the 321 refining crack. 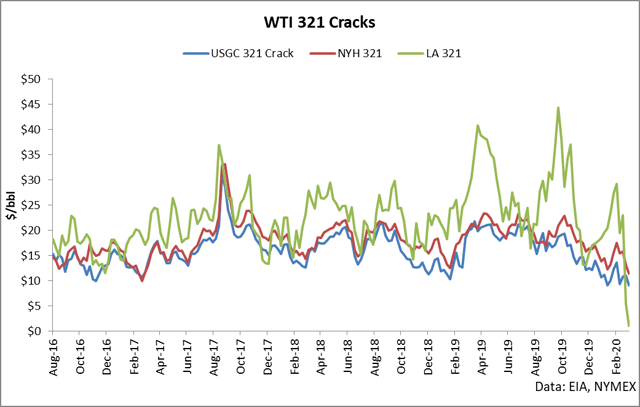 The 321 crack is a rough benchmark as to the profitability of refining (it represents the difference in price between gasoline and distillate versus the price of crude oil). It’s a high level benchmark that does not account for a variety of costs, which means that it needs to be above a certain threshold to encourage refineries to run crude oil.

This threshold varies by refinery (and is private knowledge held by refiners), but we can almost certainly say that we are nearing the area in which refining demand will curtail immediately. For example, along the West Coast, this benchmark is currently at around $0 per barrel – in other words, refineries are generally losing money when they buy crude and sell products. This is very bearish for refining demand in the short term.

Beyond refining demand, we have another key variable of the balance which is very bearish – imports. 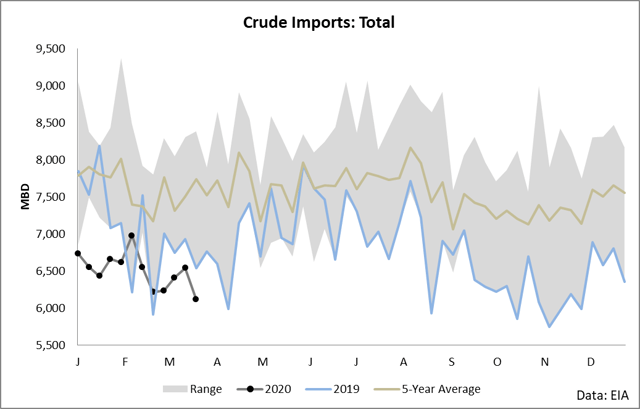 Put simply, the last year was marked by incredibly low imports as OPEC cuts went into effect in January of 2019. However, this was all turned on its head when OPEC and Russia entered into a price war earlier this month. This tangibly means that over the coming weeks, we are going to see imports dramatically switch to be positive once again – assuming there’s even refining demand to purchase the crude in the first place.

With an OPEC price war combined with unprecedented demand destruction, the bearish thesis looks very strong. However, there’s one key variable which goes against the narrative and that is the soon-to-collapse level of production. 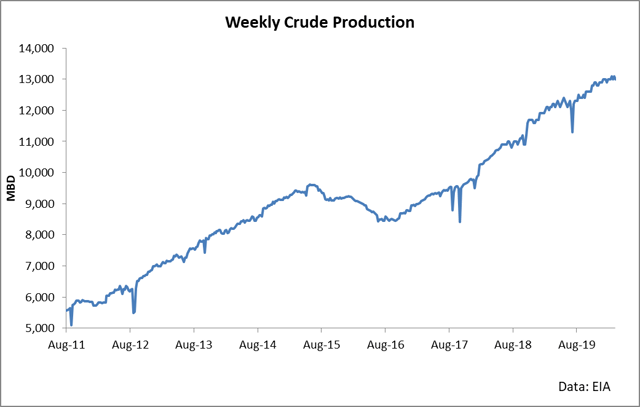 Production has been growing for some time, but for the past year we have seen a trend of declining growth rates. 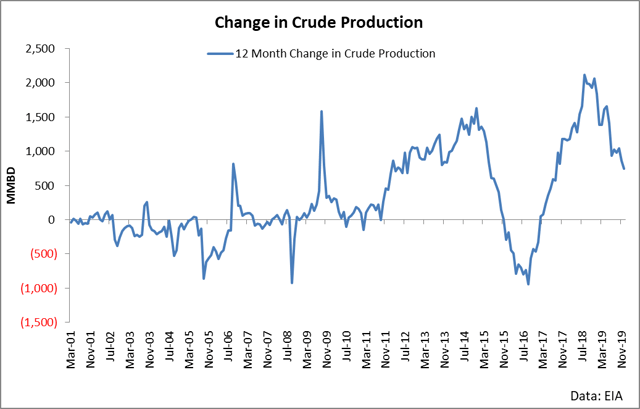 This trend was already in place when crude oil was in the $50 range – and we are down over 50% from this point. In other words, the wave of bankruptcies in the E&P sector is almost certainly going to accelerate and production is going to dramatically slow in short order. Of note, last week we saw an incredibly strong drop in rig count, which means that within a very short period of weeks, the outright level of production is almost certainly going to roll over.

Crude fundamentals are caught between two theses. The bearish thesis is based on demand destruction coupled with a price war between oil producing nations. The bullish thesis is based on the very real threat of collapsing oil production due to weak prices. For this reason, I suggest investors remain neutral USO until we see oil production substantially curtailed in that this will indicate that the adjustment is underway and a new upswing in the cycle has likely started. Until then, staying on the sidelines is the best bet.

I’ve mentioned this before when discussing USO, so I’ll keep this section brief. USO is a straightforward instrument which tracks WTI futures. It holds the front month contract and then two weeks before expiry begins shifting exposure into the second month. It then holds this position and repeats the rolling procedure.

This is a very straightforward methodology and it is highly exposed to roll yield. Put simply, USO’s architecture is agnostic to what happens to the shape of the forward curve and that ultimately has proven detrimental to holders most of the time.

In the case of WTI futures, the front two contracts have been in contango in about 80% of all months over the past decade. In other words, almost all of the time, USO has been delivering losses to shareholders through roll yield.

At present, the market is in around 14% of contango in the front contract. This tangibly means that when USO rolls exposure into the second month contract, it will be doing so into a contract that is 14% higher than the front month. As futures converge towards spot, a good degree of this contango will be reduced. Markets are always trading and this number is fluctuating rapidly, but this basically means that USO is poised to lose heavily from roll yield in the current environment.

To put this into perspective, we have seen some years in which USO has underperformed the actual price change of WTI by over 60% due to losses from roll yield. 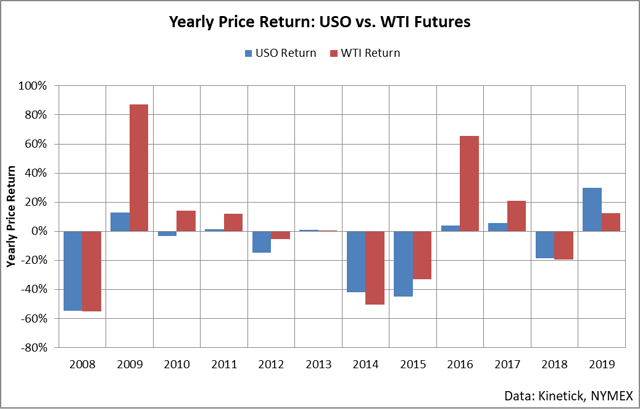 So until the market normalizes, I suggest that investors stand on the sidelines in USO to avoid the detrimental impacts of roll yield.

Crude markets have collapsed in the face of demand destruction due to quarantine measures as well as a price war within OPEC+. The key saving grace for crude oil will be a decline in production – and this decline is likely to come within a period of weeks. Roll yield is exacting a heavy toll from shares of USO as contango is very wide at present levels.