Three weeks ago I wrote an article on the coronavirus stock market which observed that in general, the faster a market enters a correction, the faster it hits the bottom. The coronavirus selloff hit a technical correction in a record time of just six days. The stock market today made another record. The Dow Jones Industrial Average Index (DJI) rose 20% from its low, ending an 11-day bear market. That 11-day bear market is the shortest in its history.

The S&P 500 (SPY) has risen 14% from its low five days ago on March 20. The graphs show a sharp U shaped crash and subsequent rise.

At this point, we are around 20% lower than the highs of February 19, having seen lows of close to 40% for the Dow Jones with SP500 not far behind.

On the same day as the Dow Jones ending its shortest bear market ever, the US overtook China for the number of confirmed coronavirus cases. The question that everyone is asking is what’s next? Has the stock market today seen its bottom, or are we in for more violent drops?

In my previous article, I analyzed how quickly a market reached the technical 10% correction, against how long it took to reach its low. If we have already seen the market low, the analysis of the top 5 fastest market corrections of the S&P 500 would look like this.

Another record that the coronavirus stock market has held is record volatility. In the last 14 trading days, 8 of them had swings of over 5% in one direction or the other. The VIX, a measure of market volatility has hit all-time highs.

And as the stock markets hit their biggest three-day surge since 1931, job claims hit (another) record of 3.28M.

One other aspect that jumps out regarding the coronavirus stock market is the trading volumes. Volumes of the S&P 500 on March 20 were 9.04B. There have only been 12 trading days ever with higher volumes. 9 of those occurred during the Financial Crisis Crash of late 2008 and early 2009. The other 3 during 2009 and 2010 as the recovery from that crash began. The 9.04B trading volume of the SP500 on March 20, also coincided with the current low of the current bear market.

And here is an interesting fact that may help think about whether we have seen the bottom yet. In all of the 23 corrections I analyzed from 1929 through to today, the peak trading volumes of those corrections only coincided with the lows on two occasions. Both of these were in the 1950s. And so if the current low on March 20 turns out to be the low of this correction, that will be an extremely unusual event. The lows generally were characterized by relatively low trading volumes. 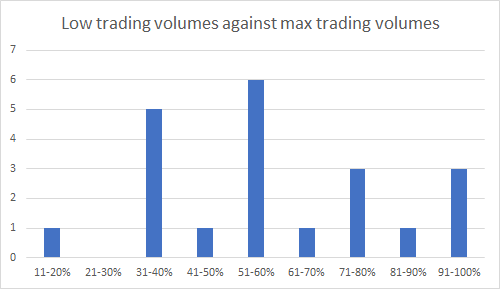 Generally, trading volumes are cautious as the markets hit their lows. The trading frenzy witnessed on March 20 is uncharacteristic and is a hint that we may not have seen the bottom yet.

Initial Job Claims: The Bear in the Room

As mentioned, the Dow Jones broke out of its bear market as record initial job claims numbers were released. Historically, a spike in initial job claim numbers has coincided or closely followed a bear market. This pattern during the 2001 Tech Bubble collapse and the Financial Crisis of 2008 can be seen clearly on the chart below.

The magnitude of initial job claims during the coronavirus crash is unlike anything we’ve seen before. The spike on the chart clearly demonstrates that. The magnitude of the stock market fall does come close to matching. This too indicates that we have not seen the worst yet.

There is one key underlying difference to anything seen before that is challenging to unravel. The underlying economy was healthy. There were no underlying structural problems. This was not the case in previous bear markets. Not in 2001 and not in 2008. The economy was quickly and sharply put on hold as millions of people around the world were confined to their homes as a result of the Covid-19 outbreak. The million-dollar question is what happens when that confinement ends. Can the economy pick up more or less where it left off? Will coronavirus be a pause or a stop?

There is no doubt that many businesses will need to rehire their employees to restart. Restaurants, travel, leisure and entertainment are all labor-intensive and have all let those staff go. All will need to restart and rehire. That is a huge number of workers. Whether world governments can provide enough support to ensure that most of those businesses do not go bankrupt in the meantime will be key.

Timing the market is a fool’s game. However, looking at the jobless numbers and the just over 20% that the S&P 500 is off from its highs, it is hard to believe that we’ve seen the worst. I’ll be watching the job claim numbers keenly and trying to strategize from there. In the meantime, I plan to continue gradually buying into the market. It is impossible to know when we have hit the low, and by gradually and systematically buying in, you will mitigate the risks associated with picking a poor entry point.

Disclosure: I am/we are long SP500. I wrote this article myself, and it expresses my own opinions. I am not receiving compensation for it (other than from Seeking Alpha). I have no business relationship with any company whose stock is mentioned in this article.