With S&P 500 (SP500) futures in a free fall ahead of the market open last Monday, the Fed came out swinging by unveiling its biggest weapon yet: unlimited QE with corporate bond buying. Although the stock market initially shrugged off the announcement with a last-gasp plunge into lower lows, a historic three-day 20% rally ensued in the S&P 500, which finally climbed above its 50-day lower Bollinger Band in the process after 13 straight days being under:

As we wrote in the past 2 weeks, the SPX being persistently under its 50-day lower Bollinger Band was indicative of a falling knife, which finally landed after Tuesday’s meteoric 9%+ rise in the SPX. The 13-day streak stopped short of matching the 16-day record set post-9/11 crash, during which a multi-month relief rally followed after the panic selling subsided: 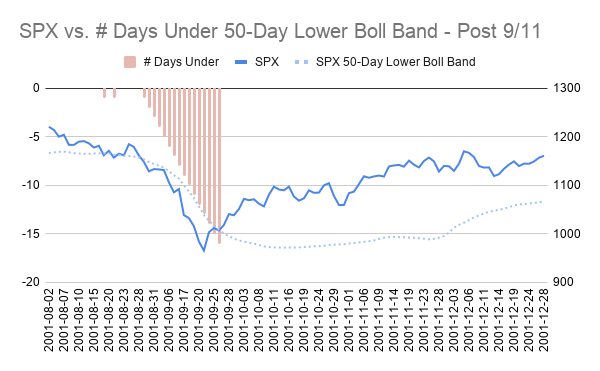 Comparison to the 2008 Great Financial Crisis continues to be most relevant given the magnitude of the current crisis, which has already taken a heavy economic toll, including in the record jump in jobless claims and consumer sentiment slumping the most since October 2008. Per Bloomberg:

“Perhaps the most important takeaway is that the largest proportion of consumers in nearly 10 years anticipated that the national unemployment rate will increase in the year ahead,” Richard Curtin, director of the Michigan sentiment survey, said in a statement.“Stabilizing confidence at its month’s end level will be difficult given surging unemployment and falling household incomes,” Curtin said. “Mitigating the negative impacts on health and finances may curb rising pessimism, but it will not produce optimism.”

In the case of GFC, we notice that the relief bounce after the initial waterfall plunge only lasted few days before S&P 500 cratered to lower lows between end of October and November 2008, though the pace of the decline has evidently slowed: 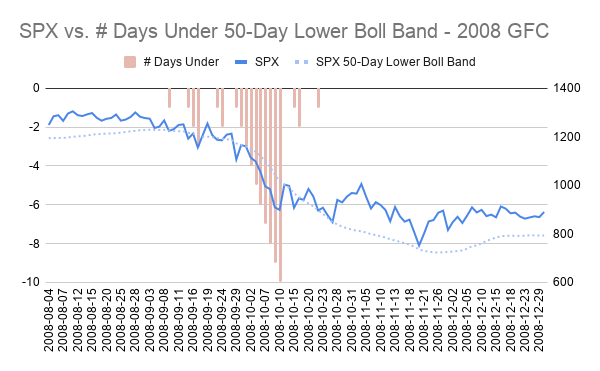 Elevated VIX Suggests Panic Selling Is Not Over

Despite the stock market roaring back, leading to celebrations of a new bull market and the end of the shortest ever bear market, the VIX (VXX) remains ominously high above 60%, which continues to draw parallels to the levels set during the peak of the 2008 GFC: 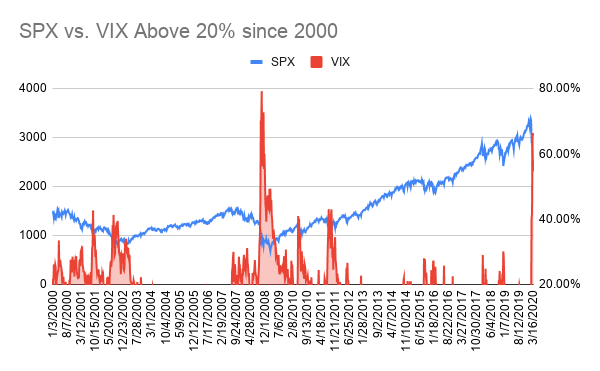 An important observation during the 2008 debacle is that relief rallies were constantly faded in the SPX until the VIX index eventually dropped back under 30%. Meanwhile, though not to the same extent, during the 2000-2003 bear market, VIX had persistently stayed above 20%, with multiple spikes above 40% before making the final bottom in 2003. Hence, with the VIX still at an uncomfortably high level of 65% today, more panic selling ought to be expected until the VIX gradually diminishes towards the 20% handle.

Another sign of a fragile market is the fact that the front-month VIX futures (VX1) continue to trade under the spot index (i.e., backwardation). Historically, when the S&P 500 rallied more than 5% week over week while VIX term structure was in backwardation, a significant sell-off ensued in the next four weeks 80% of the time, with the lone positive occurrence during the March 2009 bottom:

In other words, huge rebounds during times of an elevated VIX index and backwardation in the VIX term structure are often unsustainable and followed with reversals back to or even below recent lows.

Without a doubt, the Fed and global central banks’ unprecedented actions have provided enormous liquidity to avert a credit freeze and put a lid on tail risks in the financial system. That being said, monetary stimulus alone will not be sufficient to mount a sustainable bull market in our opinion. Ultimately, earnings remain the main driver of the stock market, and rising shareholder return, based on a speculator track record of increasing dividend payout in the past 10 years, had justified the higher highs in S&P 500 (SPY): 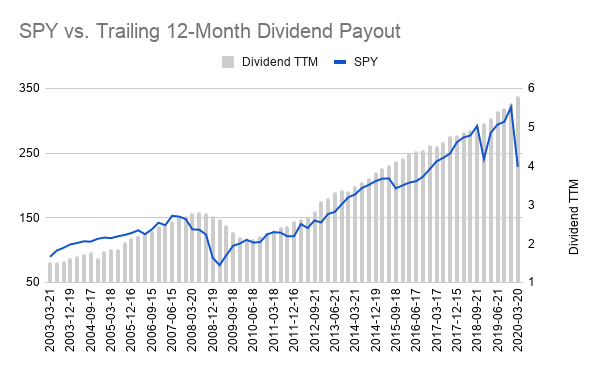 The above chart illustrates that SPY’s trailing 12-month dividend payout had been rising steadily post-crisis. In fact, the dividend payout never had consecutive quarter-over-quarter declines over the course of the 11-year old bull market, in spite of multiple economic slowdowns and short-term shocks along the way. As such, we reckon robust earnings growth was the key reason behind the impressive V-shape recoveries in the S&P 500 that we had been so accustomed to.

However, in the wake of a paralyzed global economy that is expected to endure a protracted period of negative growth and high unemployment, earnings are most certainly following suit and the only question is how bad. Per Soc Gen on Business Insider:

If the coronavirus-driven downturn mirrors past recessions, the S&P 500’s earnings could fall as much as 23% before recovering, according to Societe Generale. After accounting for the low interest rate environment, the analysts see the benchmark bottoming at 1,800 in the event of an economic recession. A pause to share buybacks and dividend payments will also drag on price recoveries.

So until we get some clarity on the extent of the damage to corporations’ bottom line and their outlook, it is rather premature to declare the end of the bear market. While the upcoming earnings season that is kicking off in a few weeks will shed some light, uncertainty most likely will continue to reign until the health crisis tapers off.

To sum up, both technicals and fundamentals suggest we remain inside the eye of the storm, which is expected the inflict more damage to the market until the VIX starts cooling off.

Additional disclosure: We may have intraday options, futures or other derivative positions in the above tickers mentioned.