I have written a few articles here on Seeking Alpha about Pure Cycle Corp. (PCYO) over the past few years. Briefly, Pure Cycle is a company with valuable assets that it is beginning to monetize in a significant way. These assets consist mainly of water rights, a scarce resource in the Denver metropolitan area (as well as many other portions of the west), along with a 931-acre property just east of the city of Aurora. This property, “Sky Ranch,” has various approvals as a planned community of up to 4,400 residential units and about 1.35 million sf of commercial space, where development has now begun.

In 2017, Pure Cycle signed contracts with three major homebuilders, Richmond American, KB Home (NYSE:KBH) and Taylor Morrison (NYSE:TMHC), for the sale of 506 lots in the first 155-acre section of Sky Ranch. Pure Cycle has subsequently been doing development work on the lots, and about 293 of the 506 lots had been transferred to the builders as of November 30, 2019.

In turn, the builders have been selling homes to individual home purchasers and have now sold, or at least have under contract, an estimated 200 homes. In order for the builder to obtain a building permit and begin construction, it must purchase water and sewer “taps” from Pure Cycle at a cost in excess of $31,000 per home. Pure Cycle also becomes the water and sewer utility provider generating a permanent annuity of $1,000-$1,500 per year.

The substantial increase in cash in Q1 was mainly due to $10.5 million in net proceeds received from the transfer of some Sky Ranch infrastructure (roads etc.) to the local Community Authority Board (which it financed through the issuance of municipal bonds). However, cash did increase by an additional $2 million in the quarter and I expect Pure Cycle to generally be cash flow positive for the foreseeable future, absent a major acquisition, irrespective of short-term circumstances. Cash operating expenses are in the general range of only $1 million/qtr., while the timing of additional cash investments will roughly coincide with short-term prospects for their sale. In fact, Pure Cycle is somewhat ahead of the curve in this regard as reflected in the $89 million in long-term investments on its balance sheet.

With WTI at $25 or so, I doubt if Pure Cycle will see any appreciable revenue near term from the sale of water to energy firms that require it for fracking. Although it is disappointing, it does not impact my above cash flow conclusions.

ConocoPhillips (COP) had been Pure Cycle’s major fracking water purchaser. When Pure Cycle announced its November 30 results, it also disclosed that COP had signed an agreement to sell its oil reserves in Pure Cycle’s service area to Crestone Peak Resources. Crestone is a private company jointly owned by the Canada Pension Plan Investment Board and the Broe Group, a diversified privately-owned enterprise based in Denver, Colorado. These are two financially solid entities and there was anticipation that drilling activity might increase as a result of the ownership change.

Conoco had actually wound down fracking activity last summer, presumably in anticipation of the sale. As a result, fracking water sales by Pure Cycle were only a bit over $100,000 in the quarter ending Nov. 30. Therefore, there is no more downside, just potential upside from here, although that may be a long way off. 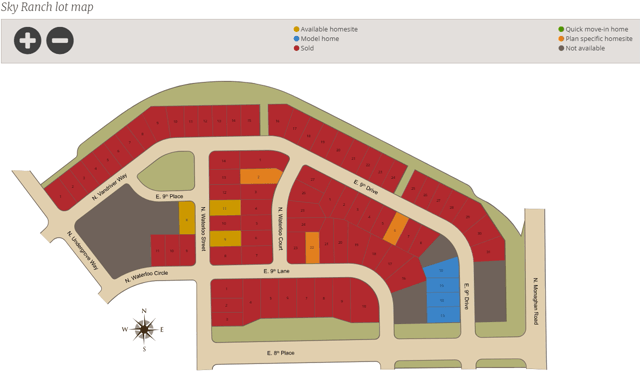 I have been checking this website periodically and created the following chart: 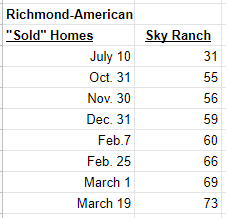 Between Nov. 30 and Feb. 25, 10 contracts were signed. Unfortunately, the other two builders at Sky Ranch do not provide similar information. However, all three builders are likely selling at a similar pace, which would suggest a total of about 30 contracts signed during the period. Shortly thereafter these contracts usually generate tap fee revenue, a necessary pre-condition for the builder to obtain a building permit. Tap fees should total roughly $1 million in the quarter which ended Feb. 29.

It is particularly heartening that the pace of contracts signed has accelerated since early February. Sales during the prior few months appear to have followed the “rule-of-thumb” that home sales between Thanksgiving and the Super Bowl are typically slow. I called the sales office at Sky Ranch early this week and the representative indicated that traffic through the development has continued to be strong. Although sales will undoubtedly slow, at least temporarily and possibly much longer, I believe it is a safe bet that mortgage rates will be exceptionally low for the foreseeable future, which should ultimately provide a tailwind.

It should also be kept in mind that Pure Cycle transfers additional lots to the builders and/or receives cash payments for them on a fairly regular basis. The contract terms for each of the three builders is different, and the accounting for this aspect of Pure Cycle’s business is somewhat complex, but I am confident there have been some additional cash receipts as well as GAAP income from these transactions during the most recent quarter as well.

In addition to the water needed for Sky Ranch, Pure Cycle has sufficient water resources for roughly 55,000 homes. The company has indicated in various conference calls and meetings an interest in acquiring additional land which it would develop in conjunction with the utilization of some of this water capacity although it also has the option to simply be the water/sewer provider and collect the tap fees. It has held at least preliminary discussions with some potential sellers. To the extent that there may have been any firm offers on the table, some of these potential sellers may be kicking themselves long about now. Once the coronavirus crisis is over and the economy appears to stabilize, there may be bargains to be had and Pure Cycle has the cash resources to potentially benefit from the situation.

Disclosure: I am/we are long PCYO. I wrote this article myself, and it expresses my own opinions. I am not receiving compensation for it (other than from Seeking Alpha). I have no business relationship with any company whose stock is mentioned in this article.