Online targeted advertisements are engrossing millions of internet users worldwide daily. Advertisements are concentrated primarily on social media platforms Facebook (FB), Twitter (TWTR), Snapchat (SNAP), and Pinterest (PINS). Facebook and Instagram dominate the social media platforms by active monthly users and, therefore, have the largest active audiences for ads. Twitter and Pinterest have around 350 million active monthly users each, with Snapchat just below 400 million (extrapolated using Snap’s daily active user count). Pinterest has the most to prove of the four, having not yet shown profitability (and, therefore, lack of continuing profitable operations) – and any profit potential will be based on its ability to grow its user base, amount of advertisements, and international revenues.

The majority of social media platforms today are worldwide, and Pinterest is no exception. In reporting its 2019 full-year results, Pinterest stated that ads are now served in 28 countries, an 300% increase from seven at the end of 2018; monthly active users hit 335 million. Revenues increased by 51% YoY to $1,142.8 million. Even with this revenue increase, Pinterest details a very long section of company risk factors to future performance. Included are: user base retention to sustain revenues, new advertiser attraction to grow revenues, possible difficulties with monetization and growth scaling, and a continuation of operating losses and unreliability of future profit generation.

Pinterest also states that its past performances are not indicative of future results. However, a quick look at its financials from 2017 to 2019, as well as global growth trends, shows potential for growth.

Now, a quick look at this might worry investors, as operating expenses tripled, net loss widened to $1,361 million, and EPS decreased to -3.24. The reason behind the huge gap in operating expenses and net loss are attributed to Pinterest’s IPO. $1,378 million had to be paid in share-based compensation in 2019, whereas only $15 million was paid in 2018. Share-based compensations should not be as large for FY20, so net loss should begin to shrink, assuming expenses associated with research and development do not skyrocket. Revenue growth has been around $300 million per year, and Pinterest’s growth metrics, per user and per user revenues, have grown substantially as well.

Since Q4 2016, Pinterest has shown consistent growth in its monthly active user base, with only one quarter (Q2 2018) showing a decline. US-based active monthly users have grown from approximately 70 million to 88 million, while international has grown from 90 million to 247 million. Quarterly revenues were published at $400 million for Q4 2019, of which the United States user base contributed 87.5%, even though that user base only contributes to 25% of the monthly active user base worldwide. Looking at quarterly average revenue per user, as reported, the United States users contributed $4.00, and international $0.21. Quarterly ARPU trends for United States are steadily increasing, whereas international ARPU is slightly more volatile. 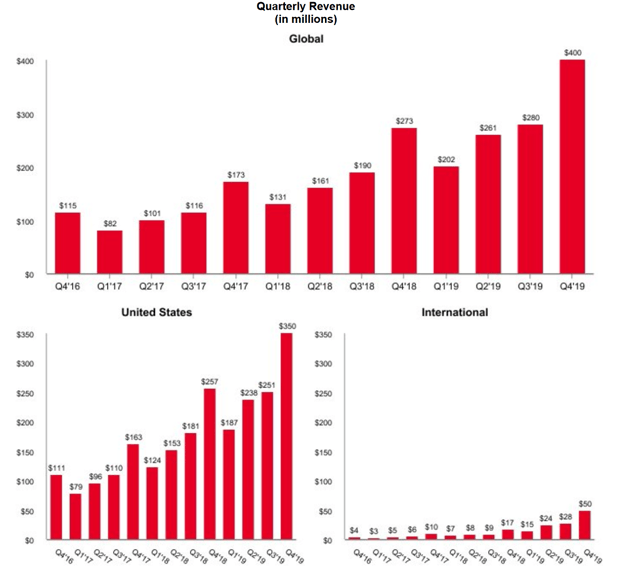 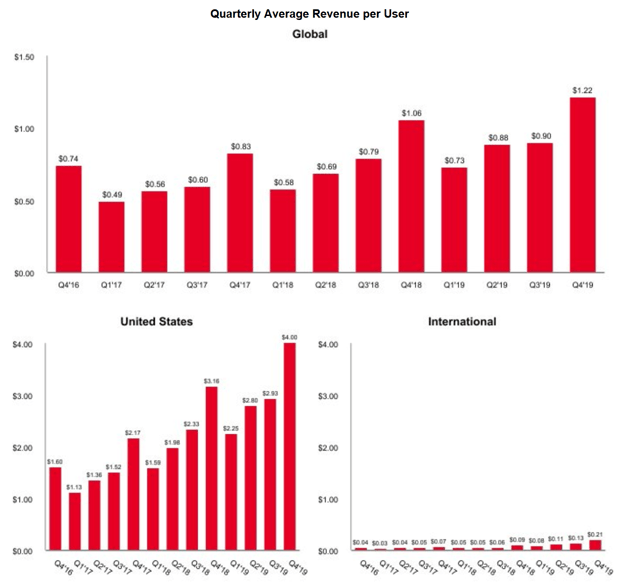 One thing to note here is that while Pinterest has shown a substantially higher increase in monthly active users worldwide as opposed to in the United States, ARPU for international users is only a fraction of United States users. The company acknowledges prioritizing its “earliest monetization efforts in the United States”, and subsequently has less experience and knowledge of how to sufficiently monetize internationally to capture its growing user base at its potential.

Should Pinterest be able to capitalize on international monetization sooner, rather than later and run the risk of competition stealing market share, and bring its international ARPU up from $0.21, its revenue stream could pop higher. Using an average active monthly user base of 285 million to estimate active users in one year (representing a 5% growth per quarter per past trends), we can calculate potential revenue growth, if, and only if, Pinterest starts to capitalize on international monetization efforts. When and whether Pinterest will do this is still unknown, but the sooner the better for its overall profitability and revenue growth.

Why Is United States Growth Small?

With the US active monthly user base contributing about four-fifths or more of total revenues and only one-fourth of active users, why has Pinterest not been able to grow this user base at the same rate as international? The answer to this might lie in the pricing behind Pinterest’s advertising, which is its source of revenue.

Advertisements on social media platforms are typically priced on cost-per-click (CPC) or cost-per-impression (CPM) basis. Some platforms like YouTube and Twitter price ads based on engagement and views, for example, but CPC and CPM (which is typically 1,000 impressions) are the primary determinants of ad prices.

Of the four, Twitter has the lowest average advertising costs on both a CPC and CPM basis; keep in mind advertisements are done by bids and costs could be much higher or lower than the average. For example, Pinterest has set a $0.10 price floor on all bids, so it could be possible to advertise for just $0.10 on a CPC basis – the likelihood of this may not be too high, however. Facebook, with the highest average active monthly users, has an average CPC just under $1 and can charge this premium over Twitter with its user base. Pinterest’s average of $1.50 per click is higher than that of Facebook and Twitter, and could be a reason that advertisers are preferring to use Twitter and Facebook; with Twitter, average CPC is 25% of Pinterest’s and active monthly users are nearly identical; Facebook’s active monthly user base of over 2 billion makes the average $0.97 per click very attractive to advertisers.

In its 10-K, Pinterest outlined 25 pages of risk factors to the company performance. Mentioned briefly at the beginning of the article, Pinterest’s main issues arise from maintaining and growing its user base, competition from other social media platforms (especially those with lower costs of advertising and larger active user bases), operating expenses growing to scale the business, and the retention of existing and acquisition of new advertisers to drive revenues.

One key factor to note is the source of Pinterest’s current advertisers: the company does realize that “a substantial portion of our revenue is derived from a small number of advertisers and is currently concentrated in certain verticals, particularly [consumer packaged goods] and retail.” Having such a concentration in just two sectors, should one of the two start to decline in influence on the platform, could have significant adverse effects on revenues, even if user base still grows. Pinterest needs to diversify, at least a bit to other sectors, in order to lessen the effect should one falter.

There is no valid proof that their business model will be successful in attracting new advertisement growth, that revenues growth occurs and that Pinterest becomes profitable, as outlined in the 10-K. Online advertising is fierce, with new platforms and modes of engagement susceptible to change rapidly (see the rise of TikTok as an example). Pinterest still lacks in efficient monetization of its international users, and relies all too heavily on slowly growing US users to generate a majority of its revenue.

Pinterest remains a risky play due to the nature of the online advertising market, its inability to generate any profits as of yet, and its higher average cost of advertising on its platform. Many small businesses use Pinterest as their mode of advertisement, but if their finances are struck down by the coronavirus outbreak, their ability to advertise on Pinterest might change. Pinterest’s heavy reliability of consumer packaged goods and retail in the US market to generate revenues could cause issues with short-term sector disruptions. The company needs to be able to generate more revenues from its international segment by increasing ARPU significantly and prove that it can do it soon. Pinterest’s revenue streams may not push it to profitability with the next fiscal year or two, and the business model comes with significant risks to performance.