The measures many countries have been taking to limit the spread of the coronavirus are decimating the demand for oil. In addition, the Russia-Saudi oil price war is fueling the supply/demand imbalance, which pushes commodity prices even lower.

As a result, oil prices plunged over the last several weeks and there’s no sign of quick recovery. Brent prices are staying below US$30/bbl and WTI prices are getting close to US$20/bbl. The situation is even worse for the Canadian heavy oil index WCS below US$10/bbl.

Investing in the North American oil industry has become much riskier since almost no producer can generate profit in this context. And there’s no downside protection for many equity investors if this situation persists beyond 2020.

However, if you’re looking for a prudent exposure to the recovery of oil prices over the long term, Parex Resources (OTCPK:PARXF) seems an interesting candidate.

Parex Resources is headquartered in Canada, but it produces oil in Colombia’s Llanos and Magdalena basins.

With its rock-solid balance sheet and its low-cost structure, the company represents a defensive investment in the currently depressed oil environment.

Parex Resources’ production is exposed to the Colombian medium-sour Vasconia crude prices that have been selling at a low- to mid-single-digit discount to Brent prices over the last several quarters.

The table below shows if Brent prices average US$30/bbl from March till the end of the year, the company will still increase its production to 54,500 boe/d and generate US$30 million of free funds flow (FFO minus capex).

Granted, much higher oil prices during January and February boosted the forecasted 2020 free cash flow. And free cash flow is also boosted by the company’s plan to reduce its capital program to US$160 million, which should have a negative impact on its production and reserves growth potential beyond 2020.

In any case, these numbers mean the company can sustain its production at Brent prices in the low US$30/bbl range, which remains much lower than most – if not all – Canadian and U.S. oil producers.

Since Parex Resources operates in Colombia, some of the company’s expenses are paid in Colombian Peso while the company receives U.S. dollars for its oil production. The table below describes the impact of the change in local currency on its costs per barrel.

Over the last several years, the company has been benefitting from favorable currency exchange that lowered its expenses. The graph below shows the Colombian peso is now at a multi-year low conversion rate with the U.S dollar. 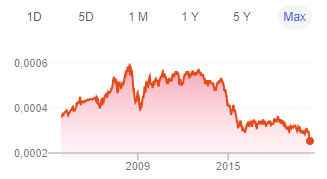 The company’s cost advantage should weaken if the Colombian Peso strengthens against the U.S dollar.

The second advantage of Parex Resources is its fortress balance sheet. The company accumulated US$397 million of cash and equivalents at the end of 2019, with no debt. Its working capital reached US$344 million. In addition, it kept an undrawn credit facility with a borrowing base of US$200 million.

In contrast, many North American producers must deal with a significant debt load.

This strong balance sheet in such a challenging environment gives the company several options.

Management had indicated it would keep on buying back shares. And since its reserves aren’t huge, I expect Parex Resources to acquire some assets.

During the last earnings call, management showed patience, indicating it would wait for some companies to be forced to sell some assets in the next couple of months.

Such a transaction wouldn’t be without risks, though. The company could weaken its balance sheet with assets that could impair its low-cost advantage.

Prudent exposure to higher oil prices in the long term

Given the phenomenal drop in oil prices, investors now have the possibility to invest in Parex Resources at a 55% discount compared to the beginning of the year.

But given the company’s conservative profile, its stock price didn’t drop as much as some of its Canadian peers over the last few weeks.

Assuming stable costs and sustaining capital of US$125 million, the company should generate an annualized free cash flow of US$448.2 million at Q4 commodity prices, which yields 29% at C$10.66/share.

That free-cash-flow yield seems impressive, but it corresponds to much higher Q4 commodity prices (brent at US$62.49/bbl compared to US$27.95/bbl currently). Also, the market values other Canadian producers at higher free-cash-flow yields. For instance, Canadian Natural Resources’ (CNQ) free cash flow yield exceeds 50%, based on Q4 oil prices. That valuation is more attractive, but it also reflects the extra risks Canadian Natural Resources involves because of its higher debt and breakeven prices.

But considering its low-cost structure and its solid balance sheet, investing in Parex Resources seems attractive for investors looking for exposure to higher oil prices over the long term while minimizing the risks of seeing their equity stake disappear.

Note: If you enjoyed this article and wish to receive updates on my latest research, click “Follow” next to my name at the top of this article.