An investment thesis in Meridian Bioscience (NASDAQ:VIVO) would be based on its success to date in its transformation efforts as well as its potential for acquisition.

Compared to peers in its industry such as Becton, Dickinson and Company (NYSE:BDX), Abbott Laboratories (NYSE:ABT), Quidel (QDEL), and Danaher (NYSE:DHR), Meridian Bioscience is a much smaller player.

But its contributions to the diagnostic field are significant. In 1982, it developed the rapid test for strep throat delivering results in ten minutes as opposed to the standard two to three-day wait. It then developed breakthrough testing for C. difficile, E. coli, H. pylori and other bacteria.

A spirit of innovation in bringing new important tests to the market, while simultaneously developing new testing platforms and methods to provide faster time-to-results and greater accuracy, drove our top-line growth.

In the middle of the last decade, Meridian expanded its geographical reach beyond North America and Europe into China. With the company’s diagnostic products regulated by the FDA, it must remain cognizant of patent expiration dates. In 2018, under new leadership, Meridian embarked on a transformation to higher growth. 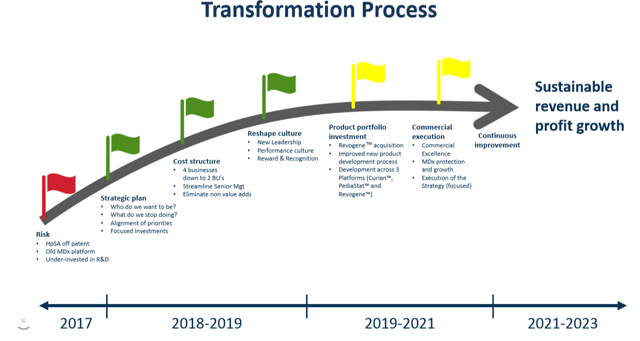 It’s not totally transformed yet, but there are signs of change.

In May 2016, Meridian’s patent in the United States for its H. pylori (leading to chronic gastritis and gastric ulcers) products expired. In May 2017, its patent expired for countries outside the United States. The products have provided approximately 16% of consolidated revenues for the past five fiscal years. The company’s guidance for fiscal 2019 included an impact to margins for price competition. For fiscal 2020, Meridian anticipates further price erosion in existing products but also rebuilding margins as it plans to introduce refreshed products based on improved testing.

Meridian’s Alethia products, formerly branded illumigene, also contributed a double-digit percentage of consolidated revenues the past five fiscal years. In fiscal 2019, over 80% of Meridian’s Alethia sales came from C. difficile, Group A Streptococcus and Group B Streptococcus assays. The Alethia patents are licensed from a third party and expire between 2020 and 2022.

This impact has been much more evident on Meridian’s bottom line.

Addressing the competition that naturally arises after patent expiration, Meridian acquired the Revogene molecular diagnostics platform, developed the Curian immunoassay platform, and is expanding its assay-menu for each of the platform. The company is already actively converting the installed base of Alethia platforms to the Revogene platform for C. difficile, Group A Streptococcus and Group B Streptococcus assays.

Two assay panels, GI (gastrointestinal) and RI (respiratory illness), are under development by Meridian’s R&D team for the Revogene platform. It expects to submit the GI panel to the FDA in the last half of fiscal 2020 and the RI panel in the first half of fiscal 2021.

When Meridian Bioscience reported fiscal 2019 results in November 2019, its guidance for fiscal 2020 continued to reflect efforts of transformation. The company expected to invest $27 million to $28 million in R&D and to conduct clinical trials for six assays across three instrument platforms.

Customer enthusiasm about this new platform has led several to adopt additional assays when converting over to the Revogene system.

Revenue declined 15% in the Life Science segment, but the company expects improved performance for the remainder of the year. Sales from China grew 70% year over year.

Meridian Bioscience joined the fight against the coronavirus in January. It shipped molecular reagents to China to help battle its outbreak. This is not the first time Meridian has been on the forefront of battling an outbreak. In 2016, the company provided highly purified biologicals to fight the Zika virus.

On Marcy 16, 2020, Meridian offered “zero cost samples of the company’s proprietary technologies to developers and manufacturers of molecular assays for COVID-19 detection”. The company also committed to manufacture and supply its formulations on a commercial scale once detection was accomplished.

It is Meridian’s hope that diagnostic companies around the world will be able to develop COVID-19 detection assays with greater sensitivity, faster run-times and formatted for high throughput testing.

But the company isn’t necessarily looking to make a quick buck off the back of the crisis. Rather, it’s hoping its response will be appreciated down the road.

And so that’s really what our sales team will be working towards – “Can we use that as an opportunity to open the door for future business in China and in other places with regard to molecular testing?”

This responsiveness is coupled with an ease-of-use in Meridian’s product. Meridian’s Lyo-Ready RT-qPCR master mix can be used by molecular testing companies to develop RNA-based molecular tests, such as is needed for the coronavirus. The mix provides a stable and reliable format. The master mix is designed to be lyophilized. The customer simply adds a patient sample to the mix and then runs the test on a PCR (polymerase chain reaction) instrument. 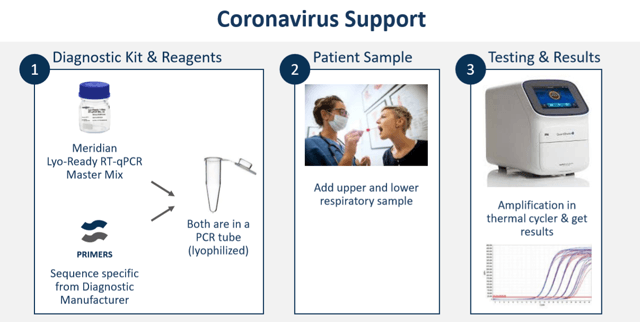 It is unlikely Abbott is employing Meridian’s Lyo-Ready RT-qPCR master mix with the ID NOW. The ID NOW platform uses isothermal nucleic acid amplification technology which differs from polymerase chain reaction (PCR). But that does not mean Abbott may not be using another master mix from Meridian. Abbott is already both competitor and customer of Meridian.

Every time an Abbott instrument anywhere in the world runs a Hepatitis A test, Meridian grew that protein and purified it and sold that to Abbott and that becomes integral to their diagnostic test.

Further, the ID NOW test is the second COVID-19 test released by Abbott. A week prior on March 18th, the company released its SARS-CoV-2 EUA test. This version runs on the m2000 RealTime System which does employ PCR technology.

There could well be potential for good corporate citizenship to eventually win business once we’ve survived this pandemic.

For example, there’s a locally-owned restaurant in my city whose owner made a public vow on Facebook to all of its employees regarding the COVID-19 crisis. The restaurant has already been closed to sit down diners for nearly two weeks. I found the owner’s post announcing its operational plans inspiring.

We have 32 employees, 25 of them have been with us from almost day one. These people have families to feed and rents to pay. I just finished a meeting with them, and told them no one is going to get laid off and lose their job. We’re going to either sink or swim together….This is a trying time … but we will overcome!

The proprietor continued to pay live musicians to play in the parking lot so people could listen from their cars (though that effort may now be shut down with our tighter restrictions effective March 29th). It is also partnering with another local restaurant and sponsoring a local drive handing out free boxed lunches to those who have lost their jobs. On the first day, the two partners handed out 600 meals.

Though I was aware of this restaurant, I’d never eaten there. But, I certainly will now – simply because of the owner’s commitment to community. This is exactly the type of business I want to succeed in my city.

Likewise, I’m much more inclined to eat at Texas Roadhouse since the CEO announced he would give up his salary for his front-line workers for the rest of the year because of this crisis. I’m also more inclined to purchase from a business offering free shipping through this challenging time than from one that refuses to adjust and help.

If corporate America were to adopt a similar attitude, Meridian Bioscience may attract attention. As part of its transformation, the company has publicly stated it is in acquisition mode. At the end of the fiscal 2020, first quarter, it had $68.6 million in cash and equivalents and $49.2 million available on its credit facility. The company owes $75.8 million under the facility.

In 2016, Danaher paid $4 billion for molecular diagnostics company, Cepheid, which had generated just $539 million in sales the prior year.

At $53 per share the offer is a 54% premium to Cepheid’s closing price on Friday, but the company’s shares have sunk badly over the past year: Last September Cepheid’s stock was worth just shy of the takeout price.

If Cepheid was attractive at $53 per share, it would seem logical Meridian Bioscience could be attractive to buyers at its current price in the $7 range. Like Cepheid, its share price has significantly dropped from its 2015 to 2016 range. It traded near $20 per share in September 2016 on annual revenue of $196 million for fiscal 2016.

However, it is pertinent Meridian’s share price may have been, at least partially, propped up in that time frame because it was paying an annual dividend of $0.80 per share. The rate was cut to $0.50 per share in 2017 and the share price immediately dropped 25%. The dividend was then suspended in the second quarter of fiscal 2019 in conjunction with the acquisition of GenePOC and the Revogene platform.

There hasn’t been coverage of Meridian Bioscience on Seeking Alpha since 2016. But the company is hardly the same company it was four years ago. Its transformation efforts are underway, and there are signs of change. The company has navigated through some patent expirations and is ahead of the game on upcoming expirations.

These patent expirations sparked a transformation effort. As part of the effort, Meridian is in acquisition mode.

Furthermore, Meridian is modeling good citizenship through this COVID-19 pandemic. If good deeds are rewarded, the company deserves some acknowledgment. Meridian could, just as easily, become an acquisition target.

Additional disclosure: I belong to an investment club and intend to review VIVO with the partners in the coming months.