In a hypothetical long-lasting stay-at-home economy, live video streaming is likely to benefit from stronger tailwinds than ever. Influencers and viewers stuck at home could boost the numbers for the foreseeable future.

Through its re-branding, JOYY (YY) – formerly known as YY – is moving away from its legacy product, YY Live, and embracing a multi-platform strategy via a growing portfolio of apps and platforms dedicated to live streaming video broadcasts that connect influencers and content providers of all sorts with end-users.

The company generated $658 million of net cash from operating activities in the full year 2019 that was just reported. It has an abundant cash reserve with $3.9 billion in cash and short-term investments sitting on its balance sheet at the end of 2019.

With an enterprise value of $1.8 billion as of this writing, the company has an operating cash yield of about 37%. That number is striking, particularly for a company that is growing its top line by 64% in the most recent quarter and is benefiting from massive secular tailwinds.

I’m going to argue here that JOYY is offering one of the most compelling cash yields on the market for investors who are accumulating shares today, with the intent of holding for the next five years and letting the story play out.

My bullish thesis for JOYY is simple:

Let’s set 39% of this thesis aside

JOYY is not a completely new idea to those who have followed me over the years. The company owns 39% of Huya (HUYA), a leading game live streaming platform in China.

You can read my previous write-up covering the five reasons why Huya is a strong buy in the rise of e-sports and gaming video content across the world. I won’t reiterate my points here.

Below is a table showing the ownership of Huya post-IPO and post secondary ADSs sale, showing YY owns 39% of the company, while Tencent (OTCPK:TCEHY) owns 30%.

If we look at the enterprise value of HUYA and YY as of this writing (the valuation of the companies if you strip out cash and debt):

JOYY’s enterprise value can be broken down into two parts:

Beyond HUYA: a broad portfolio of streaming platforms

In March 2019, YY acquired Bigo for $1.45 billion. This was a major development for the company to expand its reach beyond its original core app, YY Live.

As explained by Techcrunch:

Bigo’s connection to YY is deep-rooted. Li Xueling, a veteran Chinese journalist who’s also known as David Li, founded YY in 2005 well before the heyday of mobile-based live-streaming apps. With the intent to bring the China-tested business to overseas markets, Li started Bigo in 2016 to replicate YY’s lucrative revenue model where the platform operator takes a cut whenever viewers reward streamers with virtual gifts, which can be cashed out. […] The Bigo buyout is set to be a huge boost to YY’s international ambitions as its home market has been divided up between YY itself, its spin-off Huya that focuses on esports streaming and Huya’s archrival Douyu. Curiously, both Douyu and Huya are backed by Tencent, the company best known for the WeChat messenger, but is also China’s largest games publisher.

While the depressed valuation obviously got me interested in YY, it’s primarily Bigo and its impressive growth across South-East Asia and in the US that made me bullish.

Let’s review what is included in JOYY’s portfolio beyond HUYA:

IMO is predominantly a messaging app (think WhatsApp or Facebook (FB) Messenger) that has slightly more than 200 million MAU (monthly average users), a number that has been stable throughout 2019. I will set IMO numbers aside since the nature of the platform is fairly different.

Let’s review the breakdown of mobile MAU by platform in the past 18 months: 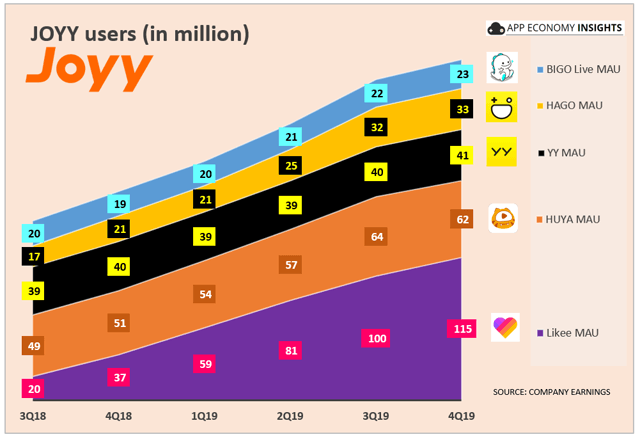 Make no mistake, all these apps are facing incredible competition in China and everywhere else. What I want to focus on is the optionality of the company with many platforms that have a multi-billion valuation potential (that is, on top of Huya’s portfolio of apps of course, such as Nimo TV and Yome Live). We are looking at an astonishing growth in MAU across the board, particularly for Likee and HAGO.

Another attractive aspect of the Bigo story is the very impressive growth of the platform even beyond Asia.

BIGO Live is monetizing extremely well in the United States, reaching the top 30 grossing apps in the country and still growing.

Based on the rankings from Sensor Tower, BIGO Live has become the most grossing social app in the US (the ranking doesn’t factor advertising revenue, only in-app transactions). As illustrated below, you can see BIGO LIVE’s quiet and steady rise to the top in the US Apple App store over the past few months across all categories. 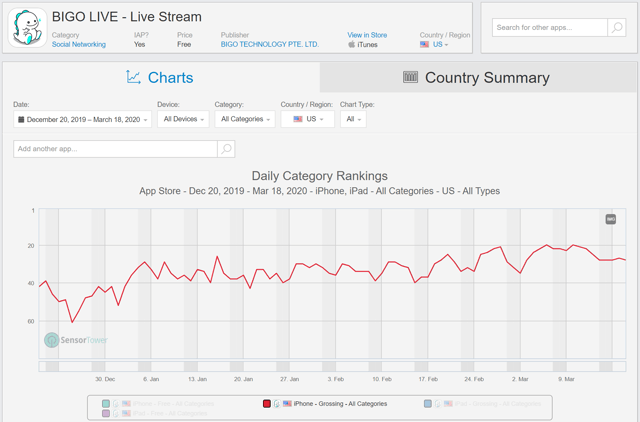 This is very impressive considering that BIGO Live’s initial market is South East Asia and other emerging territories. The platform’s breakthrough in the US is a sign that there is more to the story, and the market is not paying attention.

Likee is an app similar to Tiktok that has raised in popularity in India in 2019 and is now one of the top grossing apps there too. How popular is Likee? Look at this chart showing the most downloaded apps in the world in Q4 2019: 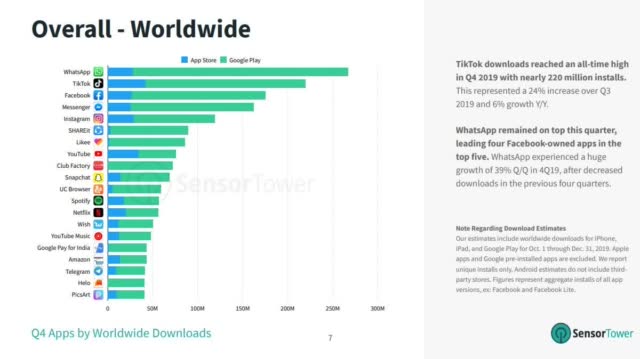 Likee has been downloaded more than YouTube in Q4 2019, close to 100 million downloads according to Sensor Tower.

Hago is another promising platform offering a compelling way for casual gamers to compete and interact. The app is estimated to have reached more than 100 million downloads on Google Play alone and is proving to be addictive. This kind of social platform has the potential to gather a fragmented crowd and is what I would consider a moonshot with tremendous advertising revenue potential.

Management also believe they can still continue to grow the YY Live legacy business that is mostly operating in China, which I’m not particularly counting on in my bullish thesis.

If we are looking backward, YY is a pure value-play, as most Chinese Internet companies are lately. The valuation multiples are ridiculously low, no matter how you would like to look at it. Price to Earnings, EV to Sales, EV to free cash flow, and so on.

We have just addressed the fact that the non-Huya part of the YY business is currently valued at about $1.1 billion by the market. That’s already about 25% less than what YY paid for Bigo a year ago, without factoring in the YY Live business.

One of the advantages of YY’s non-Huya businesses in the current market environment is the wide range of platforms and territories it caters to, from India to the United States. The company’s revenue streams are increasingly diversified, from a platform and territory perspective.

If we look at the financial KPIs, including Huya’s stake of 39%, you can see instantly why investors might shy away from a company like JOYY at first:

For the untrained eye not recognizing the nascent nature of Bigo’s platforms, the financial KPIs appear to be degrading slowly and worsening. But from my perspective, behind this decay is a long-term investment in platforms that could yield significant income per user over time.

Overall, YY’s numbers are still up and to the right thanks to the very impressive revenue growth coming in without generating the large losses we see in most US-based platforms that re-invest in themselves.

YY has a ton of optionality with its incredibly healthy balance sheet. A cash pile of $3.9 billion spread between its affiliates, combined with a net cash from operating activities of $257 million in the most recent quarter.

As explained by IR Director Matthew Zhao during the last earnings call:

In terms of cash option, we have around U.S.$900 million which were put into different charge of savings and investment. I think generally decent returns return. And meanwhile we’re also observing latest market turmoil. And obviously, [indiscernible] is very undervalued and particularly in the recent turmoil continue to go down. So we will seriously consider share buyback and other methods of returning some of this cash to the shareholders.”

The company has an enterprise value of 2.7 times FY19 operating cash flow. Needless to say, if YY is even remotely successful with any of its platforms, the returns will be in the triple digits for long-term investors.

Many companies are offering a substantial margin of safety with the recent market sell-off, particularly for investors who intend to invest for the next five years or more.

Now, with an operating cash yield of 37%, YY is something else. The current valuation is particularly compelling and doesn’t have much more room to fall at this point. Given the company’s top line trajectory, the valuation could expand far beyond its current depressed multiples.

The balance sheet is flush with cash and the company might be able to take advantage of the current market meltdown with strategic acquisitions that could reinforce its position as a leader in live-video streaming content across the world. Or management might simply start returning some of it to shareholders. A good deal either way for investors stuck at home.

If you are looking for a portfolio of actionable ideas like this one, please consider joining the App Economy Portoflio. Start your free trial today!

While keeping in mind some of the best recommendations from experienced gurus of Wall Street such as Warren Buffett, Peter Lynch, Burton Malkiel or Philip Fisher, I am trying to beat the S&P 500 index by a significant margin.

Here are some of the trends reflected in the portfolio:

Disclosure: I am/we are long YY, HUYA, FB. I wrote this article myself, and it expresses my own opinions. I am not receiving compensation for it (other than from Seeking Alpha). I have no business relationship with any company whose stock is mentioned in this article.