Home Depot (NYSE:HD) has become known as the retailer that could. With most big box stores reporting results that have been unimpressive the last several years, Home Depot has been the exception. Operating in a segment with limited competition, Home Depot has been able to continually grow sales as the economy has recovered. Home Depot results were starting to reflect a weakening environment before the recent impact of the coronavirus. With the recent pullback in shares, I have started to begin a position. I expect in the coming quarters that comparable store sales will continue to soften, but I ultimately expect a rebound. I also expect that Home Depot and its balance sheet can weather the storm. While some businesses have been shut down to only essential needs entities being allowed open, Home Depot qualifies as a hardware store and is essential. This is good news as it prevents Home Depot from having to shut its operations completely.

Home Depot continues to perform well, considering its massive size. However, in the recently reported fourth quarter, the company reported revenue that declined.

Benefiting from the low new housing starts, existing home sales have been particularly strong and driving sales for the home project retailer. While there were some positives in the earnings report such as an increase in the average ticket price, the number of transactions declined, but it was made up for by an increase in ticket price. It is very important to continue to have strong comparable store sales growth. The decline in revenue was due to an extra week of operating results in the fourth quarter of 2018. This helped sales grow by $1.7 billion. Excluding this, sales grew in total by $1 billion compared to the year earlier period. Not too bad of a performance, but one that requires a fair valuation. 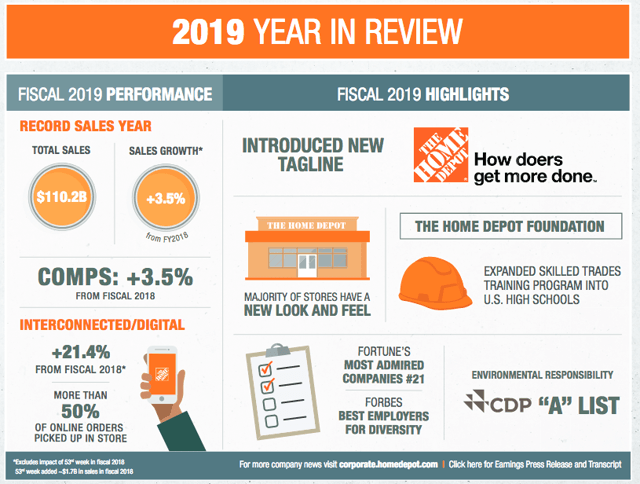 The company has not updated investors as to what impact it will see from the recent closure of many businesses in the United States. Nonetheless, this comes at a time that is the beginning of the busiest time of year for the company. I do believe that this recent crisis will lead to pent-up demand that will ultimately lead to higher sales perhaps in the fiscal second quarter.

Taking a look at the most recent 8k, we see the following information. 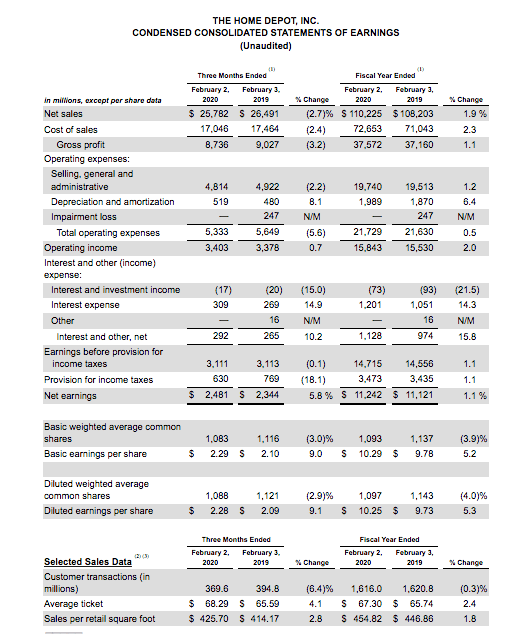 Net sales have increased 1.9% for the 12 months ended 2/2/2020 compared to the year prior. Earnings per share increased 5.3%, which was helped with the reduction of 46 million shares. While sales per square foot increased, it is important to remember why. The average ticket price increased at a pace of 2.4%. However, as we noted before, looking at number of transactions in terms of percentage growth versus sales, we can get an idea of what growth is coming from. In this case, while there was a higher dollar amount spent, there was a general increase in transactions, which is a positive. Investors should look for any decrease in transactions as a tell of potential weakness.

Looking at the balance sheet, the company can maintain its financial strength for a decent amount of time. 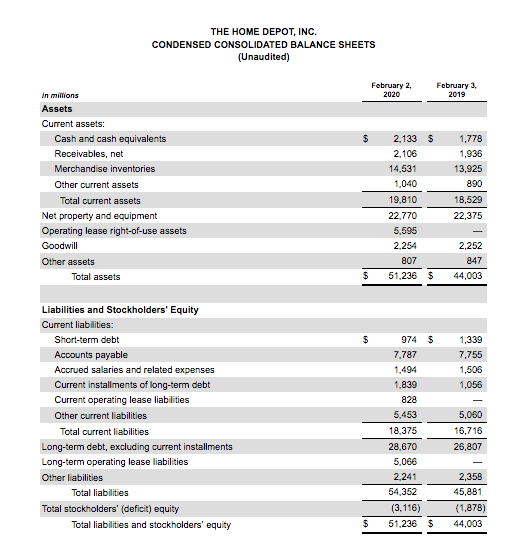 Looking at Home Depot compared to its only real public competitor Lowe’s (NYSE:LOW), we can see that HD trades at a premium.

Currently, HD offers a better P/S ratio going forward than Lowe’s. However, HD trades at a premium when looking at forward P/E. While deservedly so due to the strong growth in comparison to Lowe’s, it is important that investors realized there is a turnaround underway at Lowe’s, and going forward, the gap may close. Also, HD has a higher yield which may be more attractive to investors looking for income.

Looking at Home Depot’s valuation compared to its historical standard for the past 5 years, we see the following. 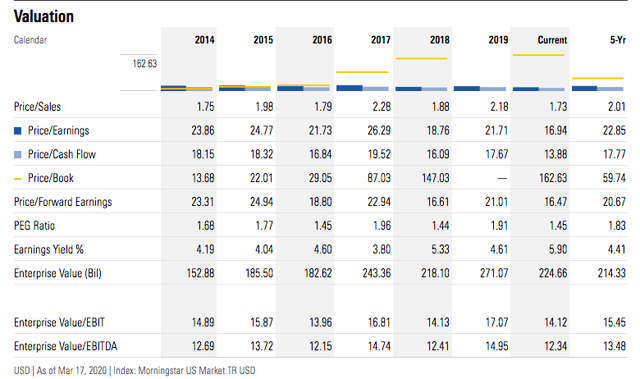 Home Depot trades at a discount to its average forward P/E, P/E, PEG, P/S, and P/B. This coming at a time when the company is not performing as well as investors expected. However, these metrics can change as the company may see a negative impact from the recent economic shutdown. As the years of growth may be coming to a temporary end, Home Depot should probably be trading below its 5-year averages or at the very least, in line. The only time a premium should be expected is when the company is going to be doing better than it typically has. Right now, it trades at a discount and may offer value.

Home Depot shares traded as low as 10x earnings during the recession of 2008. While this type of recession was greater than we would probably see again in the near future, it is evident that shares can face a precipitous decline.

Next, looking at historical yield, we see what may be higher than average for Home Depot representing value. 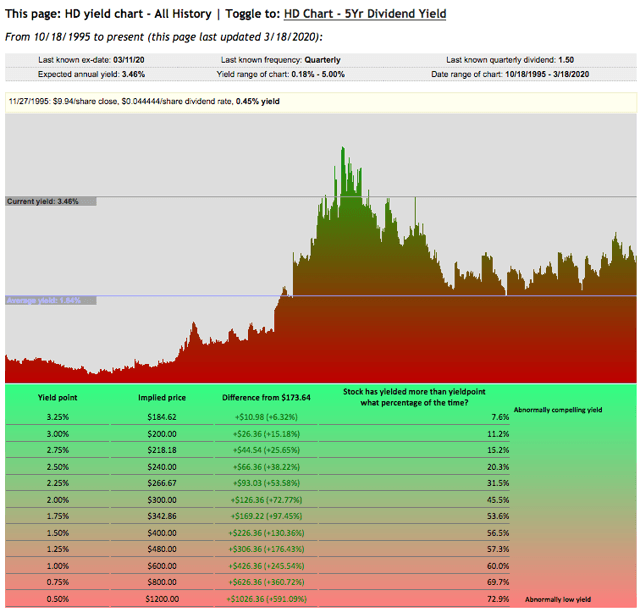 Home Depot currently offers a yield of 3.46%. The dividend has been raised for the last 11 years and should continue to be so. Since 1995, shares of HD have yielded above 3.25% about 7% of the time. While the average yield is closer to 1.6%, a sign of undervaluation would be around 2.75%. While HD has been growing its dividend for the last 11 years, it should be noted Lowe’s has been growing its dividend for 56 years. However, for investors tempted to buy shares now, you are locking in a healthy above average yield.

While shares in Home Depot have pulled back from their 52-week high, investors should look to see if starting a position for them makes sense. Those currently holding the stock should continue to do so as the company is well run and offers long-term growth potential as the continued aging of homes require further investment. Furthermore, as home prices rise, fixer uppers will become the more affordable option for first-time home buyers and create more trips to the local Home Depot than a newer renovated home. A huge amount of homes from the last housing boom in the early 2000s are going to be due for much work soon, and investors may see this benefiting Home Depot. I was waiting for an entry point initially around $190 per share, and started one at $170. With all that is going on, I expect any further drop to be a buying opportunity for me. The business may be impacted, but it is important to remember it is temporary. Patience may be key with this name going forward. Happy Investing!

Disclosure: I am/we are long HD. I wrote this article myself, and it expresses my own opinions. I am not receiving compensation for it (other than from Seeking Alpha). I have no business relationship with any company whose stock is mentioned in this article.