Hess Corporation (HES) announced losses for the fiscal year of 2019. But all the market focus is on the Guyana discoveries and their impact on the future of the company. Administrative levels are probably a little higher than normal as activity begins to climb in Guyana until those discoveries produce. Many costs often come first before the income. Therefore, the losses shown are not that unexpected. What was unusual was a lack of management discussion about the Guyana activities on various income statement costs and balance sheet accounts.

As the market concerns mount due to the coronavirus and the oil price war, this project is likely to continue. Large projects like this generally do not begin unless there is a good chance for very low costs. Therefore, these long-lived assets will likely be developed in some form. Arrangements have been made for platforms and other associated infrastructure. So, at least another year or so of progress will provide some very low cost production. Exploration can definitely be differed. But projects already underway are likely to continue.

A partnership like the one with Exxon Mobil (XOM) often has a goal to make the partnership self-funding as soon as possible. The apparently low breakeven costs of the project combined with the typically longer-lived (and large amounts of) offshore production should enable that self-funding goal to be achieved within a couple of years. In the meantime, Hess has more than $1.5 billion of cash on the balance sheet to fund any partnership needs. Once that cash is sufficiently used (possibly halfway used?), there should be enough partnership profitability evidence for the company to do some debt funding if necessary.

More importantly, the other discoveries will increase production significantly each year until the partnership reports no more new discoveries. Therefore, this company is looking at a decade of low cost growth. The development budget for offshore Guyana alone is $860 million. That kind of expenditure implies some large cash flow growth ahead. 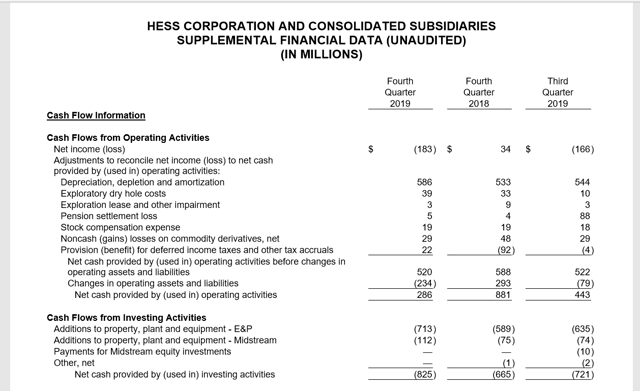 Cash flow is holding up remarkably well (before changes in assets and liabilities) due to the significant Bakken production increase. The company appears to be able to project at least $2 billion of cash flow in the current year. The cash balance can easily fund the remaining $1 billion of the current budget guidance. Additional liquidity can be obtained by selling some midstream shares should management determine that is necessary.

The cash flow statement above also gives a good idea of the relative outspend of cash flow from operating activities that vary between $100 million and $200 million per quarter. Most likely the startup of production in Guyana should ensure that cash flow climbs steadily during the fiscal year. 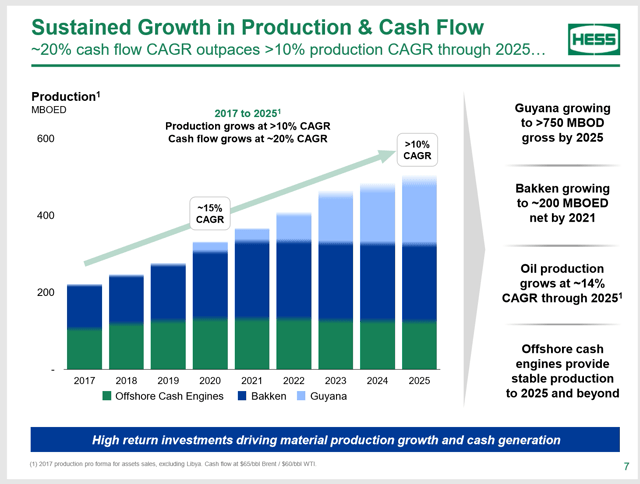 I am assuming that the current industry challenges pass within six months, and by late summer, we are on our way back to a more normal situation (hopefully, before then).

One of the reasons for the very low cost and high profitability of this discovery, besides the geology, is the relatively low activity levels throughout the oil and gas industry. The offshore has not been very competitive for capital dollars with the growing unconventional production. That now appears to have changed as offshore activity appears to be picking up slowly from some very low levels.

The strategy of growing and exploring while costs remain low means that additional long-lived production is available for more cash flow once the oil market begins its inevitable cyclical recovery. There can be some major cost savings for a project such as this joint venture in the form of lower lease costs, drilling costs, and even the midstream construction to get the oil to market. Those savings often provide years of lower costs that outweigh a year or two of low oil prices.

The key to this investment is that the cash flow build will begin now. Future prospects will most likely be enhanced by more discoveries. But the occasional dry well probably will not affect the price long term because there is now so much production to be brought online. Even after the last discovery well is drilled, there would probably be at least 5 years of work to bring all the production online.

Hess is very likely to be among the fastest-growing companies in any industry. The low breakeven of this major partnership project ensures that cash flow will grow faster than production growth. Obviously, margins cannot grow forever. However, Hess has low enough continuing business margins that cash flow should grow more than production in the latest five-year horizon.

On March 17, the company announced that Guyana would continue as many offshore giant projects do. The Bakken would be reduced from 6 rigs to 1 rig. The budget will be reduced by $800 million to a $2 billion capital budget. The company has a decent hedging program to get it through the current challenges and also obtained an additional $1 billion line of credit. This company should sail through the current situation in decent shape.

At some point, there will be enough infrastructure in place that production additions will be faster and less costly than the current initial expenditures. One of the benefits of a large discovery such as this one is that each additional large discovery often lowers costs as the initial costs become “spread out” over more production.

A company such as Hess often becomes a takeover target by a larger player. A company such as Exxon Mobil (NYSE:XOM), for example, would realize some savings by combining the percentages of both companies through an acquisition. Other industry competitors may want to “pay up” to take advantage of a major discovery such as this one. That future cash flow can be worth a lot to other industry acquirers.

Hess has a very bright future even if the oil and gas industry never returns to favor again. More than likely Hess stock will outperform its peers in any industry recovery as the positive news from more discoveries continues to periodically remind investors about the cash flow growth. The time will return when oil and gas stocks soar on news of nearly any discovery. Since Hess already has a lot of significant discoveries compared to any newcomer, the odds of a far higher stock price in the future appear very high odds indeed.

I analyze oil and gas companies like Hess Corporation and related companies in my service, Oil & Gas Value Research, where I look for undervalued names in the oil and gas space. I break down everything you need to know about these companies – the balance sheet, competitive position and development prospects. This article is an example of what I do. But for Oil & Gas Value Research members, they get it first and they get analysis on some companies that are not published on the free site. Interested? Sign up here for a free two-week trial.

Disclosure: I am/we are long HES. I wrote this article myself, and it expresses my own opinions. I am not receiving compensation for it (other than from Seeking Alpha). I have no business relationship with any company whose stock is mentioned in this article.

Additional disclosure: Disclaimer: I am not an investment advisor and this is not a recommendation to buy or sell a security. Investors are recommended to read all of the company’s filings and press releases as well as do their own research to determine if the company fits their own investment objectives and risk portfolios.