Gold prices were steady close to two-week highs in Asia on Friday. The coronavirus’ horrible impact on the global economy was underlined by truly horrific US employment data in the previous session but hopes for more, major governmental rescue action seems to be cushioning the blow.

A US package worth an estimated $2.2. trillion has passed the Senate and is reportedly expected by Speaker Nancy Pelosi to get through the House of Representatives later on Friday. That’s despite some market-rocking rumors that it might have been difficult to form a quorum there.

Leaders from the Group of 20 leading industrial powers pledged on Thursday to inject more than $5 trillion to the global economy to fight the pandemic and shield populations from its worst economic effects. Those effects have been on especially brutal display in the last 24 hours, notably in news that more than three million Americans signed up for joblessness-related benefits last week.

No wonder gold looks perky then. Admittedly the market remains beset by the impulse among some investors to cash out in order to cover losses elsewhere. However the febrile economic atmosphere engendered by the contagion, to say nothing of rampant money-printing, seems set to underwrite a strong underlying bid for the asset this year.

Focus in the market and indeed all others will remain on Congress as the week winds down. President Donald Trump took a call with his Chinese counterpart Xi Jinping Friday which was apparently cordial, constructive but neither side gave much more away.

Crude oil prices rose at the start of the session but pared their gains as it went on.

They are finding some support in the same state-aid hopes which have listed other markets. However, staggering Global Positioning data, which reportedly suggest an 82% drop in major US cities’ congestion, along with the ongoing price war between major oil exporters Russia and Saudi Arabia, are likely to make this fleeting.

Prices have left the lows of mid-March far behind but the market doesn’t look terribly confident at its current, two week highs. Daily trading ranges have narrowed. This doesn’t seem likely to last however and the direction of any break in the current narrow daily-close trading range could be instructive. Should consolidation be seen around the $1600/ounce handle, that could be a sign that the bulls are preparing themselves for another try at this month’s near-18-year highs. A slide back below that point could be a sign that the recent lows are back in play but, given the clear levels of fundamental uncertainty now dogging markets, prolonged weakness for gold seems highly unlikely. 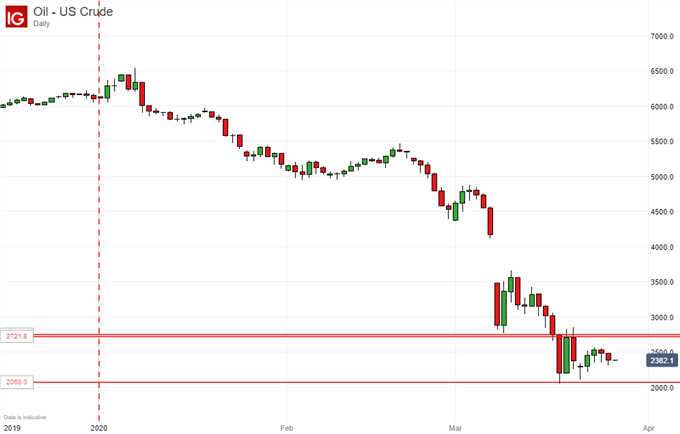 Buffeted by headwinds both general to all markets and specific to its own, crude oil is having far more trouble than gold in leaving behind this month’s notable lows. Once again smaller daily trading ranges testify to heightened uncertainty, understandable though that may be. That said, the bulls have failed to regain even the $27.70 area from last week which forms the first obvious resistance point for this market.

If they can’t into this week’s close then it will hard to avoid the conclusion that the path lower is open once more, even if the $20/barrel point is likely to remain a formidably psychological barrier,