Gold prices rose initially in Tuesday’s Asia Pacific session, as news of huge US monetary action to try and counter the coronavirus’ economic effects supported stock markets and lessened the impulse to cash out of precious metals to cover losses elsewhere.

However strong gains for local stock markets on the same news saw gold and other counter-risk assets return some of their gains as the day went on. The US central bank introduced an extraordinary array of schemes on Monday, allowing it a broad range of lending options aimed at helping those who’ll take the hardest economic hit as the virus puts daily life into deep freeze across the world.

On the fiscal side a stimulus package potentially worth up to $2 trillion remains stalled in the Senate, but hopes remain high that a deal to let it pass will be reached soon.

Having fallen sharply this year as investors took advantage of price gains to cash out, despite the heightened uncertainty which usually supports gold, the metal now seems to be acting more in line with its traditional haven role. That could explain its slip back from session highs as stock markets held up. The Nikkei 225 benchmark rose more than 5% as investors digested the Fed’s move.

The coming session will bring Purchasing Managers Index numbers from around Europe and the US. Always closely watched, these timely economic data may well get special attention this month as they will cover a timeframe in which the true, dreadful impact of the contagion became apparent.

Crude oil prices gained as sentiment improved across the board, with the prospect of massive stimulus across developed economies banishing at least some of the gloomier demand prognoses seen in the past month.

A tick lower for the US Dollar also supported demand. However, the ongoing price war between major exporters Saudi Arabia and Russia will likely keep a firm lid on prices until it’s resolved, and there’s no sign of resolution yet. Then there are ongoing, broad travel restrictions and clearly limited scope for economic activity, end demand for crude will remain under a cloud.

Gold prices have clearly powered away from the near-four-month lows hit in March, with the bulls now testing resistance at $1576.59/ounce which was the daily-closing low of March 12. That point forms the lower boundary of what by current standards is a narrow band of resistance with its top at $1596.97, March 13’s intraday high.

That band has been entered during Tuesday’s Asian trade, but gold bulls have yet to nail down a daily close within it. It could be well worth watching to see whether they can. If so, further gains are very possible, if not the market may yet need more consolidation before it can push higher. 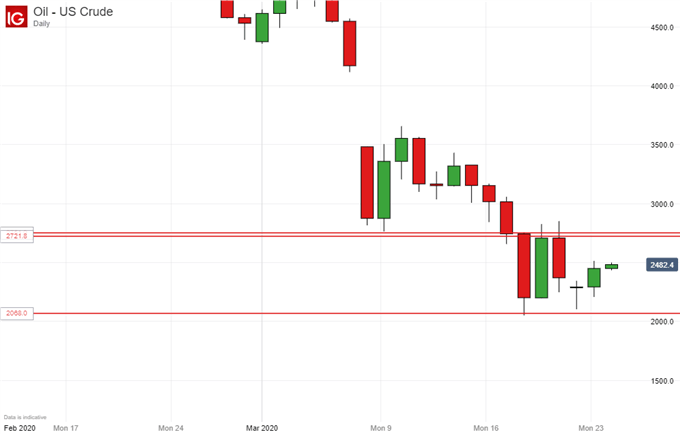 Crude oil prices’ bounce is notably less emphatic than gold’s although, given the asset’s pronounced fundamental headwinds that should surprise no one.

They could however be headed for a notable three straight sessions of gains, albeit modest ones, if they can end Tuesday’s trade in the green. Resistance in the $27.20 region from last week still bars the immediate way ahead, however, and will have to be topped by the bulls if they’re to make serious progress. On current daily ranges this looks as though it will take a bit of time, assuming it can be accomplished at all, with March 18’s intraday low of $20.68 still uncomfortably close as support.