On Tuesday, February 25, 2020, liquefied natural gas infrastructure and energy firm Golar LNG Limited (GLNG) announced its fourth-quarter 2019 earnings results. At first glance, these results were quite solid as the company managed to beat the expectations of its analysts in terms of top-line earnings and actually managed to generate a profit unlike fellow liquefied natural gas tanker company GasLog Limited (GLOG). It was perhaps even more impressive that the company managed to accomplish this despite having a number of steam-powered carriers in its fleet, a situation that forced GasLog to incur rather substantial impairment charges. A closer look at the actual results does indeed show that there was a lot to like here and investors should overall be reasonably pleased with the company’s performance during the period.

As my long-time readers are no doubt well aware, it is my usual practice to share the highlights from a company’s report before delving into an analysis of its results. This is because these highlights provide a background for the remainder of the article as well as serve as a framework for the resultant analysis. Therefore, here are the highlights from Golar LNG’s fourth-quarter 2019 earnings results:

It seems likely that the first thing that anyone reviewing these highlights is likely to notice is that essentially every measure of financial performance showed marked improvement compared to the third quarter of 2019. This is quite different from what some of the company’s peers, such as GasLog, reported. One of the reasons for this is that the liquefied natural gas shipping market was substantially stronger in the fourth quarter than it was in the previous one. This is certainly not what readers might expect when we consider that China experienced both a warm winter and a slowing economy so it has amassed something of an oversupply of natural gas. This actually worked in the industry’s favor, however. This is because liquefied natural gas producers continued to produce and ship their product in accordance with their contracts but in some cases the vessels were not able to unload their cargoes at the destination point; so fully loaded tankers were essentially idling off of the Chinese and South Korean coasts. This actually resulted in a shortage of tankers in the market. In fact, Golar LNG Partners (GMLP), Golar LNG’s dropdown master limited partnership, noted that there were times when its Golar Maria steam-powered tanker was the only tanker available in the market. The basic economic law of supply and demand tells us that this will push up the spot day rate for tankers and we did indeed see this reflected in the company’s results. In the fourth quarter, Golar LNG achieved a time charter equivalent (a measure of average daily revenue allowing the comparison of performance between periods despite changes in the mix of charter type) of $77,000 across its fleet compared to $35,000 in the third quarter. This naturally boosted the company’s revenue. All else being equal, this means that more money was available to move down to cash flow and net income.

In various previous articles, I have discussed how the total global supply of liquefied natural gas has been increasing. In fact, during 2019, a record amount of production capacity received the green light from various corporate managers. This, combined with a warm winter and a slowing Chinese industrial sector, has had a negative impact on liquefied natural gas prices. This is unlikely to be a surprise to anyone. This may actually work to Golar LNG’s advantage though. This is due to the company’s Golar Power division, which is constructing the Porto de Sergipe I power plant in conjunction with EBRASIL (a major Brazilian utility) in Barra dos Coqueiros, Brazil. This plant has a total designed output of 1.5 gigawatts and will be powered by natural gas. The actual plan is that the plant will import liquefied natural gas from Qatar Petroleum and Exxon Mobil (XOM), which will be stored in a floating storage and regasification unit supplied by Golar LNG. As the power plant will be paying for the liquefied natural gas, its profits and by extension Golar Power’s will increase as the price of liquefied natural gas declines. We can clearly see this here:

As we can see here, at the current price of liquefied natural gas, the plant will make a profit of about $32 million per cargo. This amount will certainly vary with natural gas prices, but I cannot see any near-term catalyst that will push prices higher. This is a nice position to be in as we can conclude that the project should have a positive effect on Golar LNG’s profits when it starts operation. This is expected to be by the end of the first quarter of 2020, so we will likely see the impact into the second.

One of the most important things for us to watch with companies like this is the revenue backlog. The revenue backlog is the total amount of revenue that the company is expected to bring in based on the current contracts that it has with its customers. As mentioned in the highlights, Golar LNG was able to take advantage of the strength in the shipping market during the quarter and secure a number of long-term charters for the tankers in its fleet. At the start of the year, Golar LNG’s tanker fleet had a total revenue backlog of $26 million but by the end of the year the company managed to grow it to $172 million. 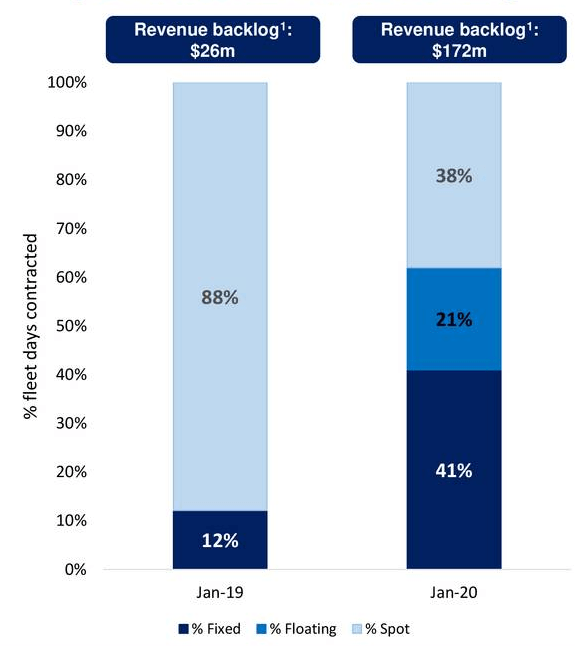 The company’s tanker fleet produced $84.524 million in revenue during the fourth quarter. This is still only about two quarters of revenue at the company’s current run rate, but it is still nice to see that the company was able to substantially increase the percentage of its revenues coming from long-term contracts. This could be particularly important given today’s weakening economy and fears of a pandemic. The fact that $104 million of this backlog is from fixed-rate contracts also provides some downside protection just in case the slowing economy causes shipping day rates to decline.

One of the unique things about Golar LNG is that the company is much more than just a shipping company. The company also owns and operates liquefaction plants that float on the water and as I discussed in a previous article, this has proven to be a major source of both revenues and profits for the company. This continued to be the case in the fourth quarter. During the period, the Hilli Episeyo floating liquefaction plant generated a total of $54.524 million in revenue or 39.21% of the company’s total. Golar LNG has begun constructing a second floating liquefaction plant, called the Gimi, which has already secured a twenty-year contract with BP (BP) for work in Mauritania and Senegal. When we consider the amount of revenue being generated by the Hilli Episeyo, it should be easy to see that the Gimi will have a very positive effect on the company’s revenues once it begins operating. This is expected to be in the fourth quarter of 2022 so we can expect to see the company’s financial performance jump at about that time.

The contracts for the Hilli Episeyo and Gimi have given Golar LNG a great deal of backlog due to their high revenue and length. As of the end of the fourth quarter, the company had a total of $6.558 billion in backlog as we can see here: 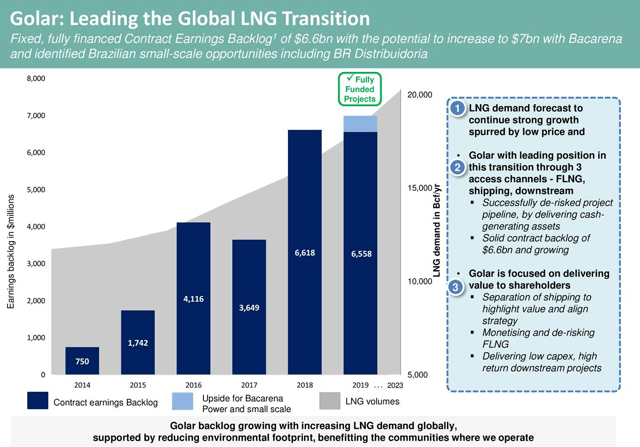 This represents a total of 47.4 quarters of revenue at the current run rate. As this forward revenue is backed by contracts with major, financially secure corporations it is about as close as we can get to guaranteed revenue. This should provide comfort to investors that are scared of the current conditions in the economy.

In conclusion, these were very solid results on the part of Golar LNG that certainly run contrary to the beating that the company’s stock has been taking by the market in recent weeks. The growth story continues to play out in a very big way and it is showing no signs of stopping. This may create an opportunity for an investor that is able to look beyond the current conditions and towards the future.

Disclosure: I am/we are long GLOP, GMLP. I wrote this article myself, and it expresses my own opinions. I am not receiving compensation for it (other than from Seeking Alpha). I have no business relationship with any company whose stock is mentioned in this article.