The economy continues to grind to a halt as increasingly aggressive coronavirus containment measures are being implemented throughout the US and the world. These trends are threatening employment where millions of workers in various impacted sectors are being laid off, or having their hours reduced. This is also making for a rapidly deteriorating automotive market. General Motors (GM) is about to face a systemic shock from both the production and demand side of its business. Furthermore, the company’s lending exposure could be very problematic if unemployment surges in the coming months. We look at how the coronavirus has impacted automotive sales in China, why we expect GM to suspend its dividend, and the company’s exposure to credit via GM Financial. In all, General Motors is likely to face some very challenging circumstances that make it an extremely risky investment at this time.

China Was A Canary In The Coal Mine

What we are seeing play out in the United States has already been seen in China about two months ago. China had to take aggressive containment measures that shut down the economy and disrupted consumer activities. The shutdown was catastrophic for automotive sales in the country. In January, automotive sales in China fell 18.7% Y/Y. In February, that jumped to a staggering 81.7% decline from February 2019. In other words, the efforts to contain the coronavirus completely froze the automotive market.

These containment measures are now impacting the US in an increasingly drastic way. A handful of states have moved to virtual lockdowns on their own economies, including some of the most economically dense states in the union such as New York and California. This is just a worst-case scenario for automotive sales. These shutdowns are a triple threat of sorts to automotive manufacturers. First, you have automakers shutting down manufacturing plants to help slow the spread of coronavirus. Secondly, the “stay-home” mandates being enacted by various states will cripple sales efforts. For example, in New York, automotive dealers are allowed to stay open for repairs and service – but sales do not qualify as an essential operation. As a result, many automotive dealers are furloughing their sales staff. Third, the massive disruption to many sectors such as the restaurant business, retail, and hospitality is leaving many consumers without a paycheck. Without people working, there will obviously be far less consumers in the market for a new vehicle.

We have started to see industry forecasts for 2020 automotive sales in the US get cut. We are actually more bearish on sales, because we suspect that the economic recovery for many consumers will take months. In other words, people will need months to catch back up on their finances once this has passed. The markets will recover much more swiftly than the average consumer will in our view.

Automotive manufacturers are businesses with high CAPEX costs, they are very capital-intensive. When you have these large and expensive factories (filled with expensive labor), it’s incredibly important that the plants work to near full capacity. Otherwise, the high amounts of overhead just crush profitability. We saw an example of this in 2019 when General Motors had to work through a labor strike that cost the company more than $2 billion in lost productivity. We see below how it impacted operating metrics across the board. 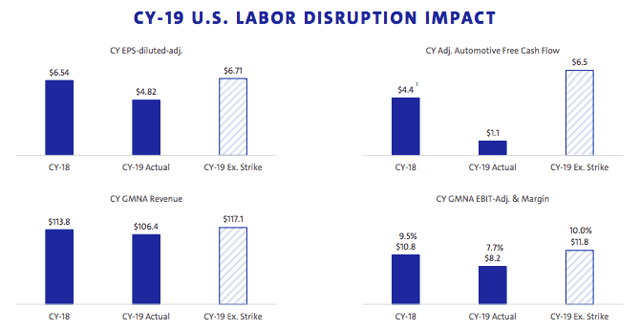 The strike lasted roughly six weeks, and it was immensely disruptive to General Motors and its financials. Social distancing mandates are threatening factory productivity, while also shocking the business from the demand side.

Now the main objective of many companies is to maximize liquidity in anticipation of what hardships that are coming. Ford has already suspended its dividend, and we expect General Motors to follow suit. The company currently has about $17.3B in cash on hand in addition to another $17.3B open on its revolver. 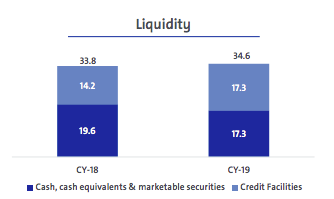 Suspending the dividend will free up another $2.3B approximately. For the near future, this becomes a matter of financial survival. Some of this could be offset by the company pivoting into the manufacture of ventilators as part of the Defense Production Act that Donald Trump invoked last week. Even as difficult as these circumstances are, there is an even darker cloud potentially on the horizon.

“History Doesn’t Repeat Itself, But It Often Rhymes”

We see the financial arm of General Motors once again being a pain point for GM as this crisis worsens. While the circumstances around the disruption are different from 2008-2009, it looks like a similar result is increasingly likely to occur. The company’s large credit exposure via its financial arm will pose a serious headwind to General Motors.

The interest that lenders make on automotive loans is often more than the actual mark-up on the vehicle itself. Being so lucrative, automakers have continued to make lending a central part of its business.

GM Financial (the lending arm of General Motors) plays bank for approximately 38% of its US sales, and 50% of its Latin America sales. While a pandemic was not on our mind in July, we did cover the idea that a bubble was forming on automotive loans as consumers increasingly stretch themselves to afford these expensive vehicles. As politicians continue to squabble over stimulus packages in Congress, Federal banks have warned that unemployment in the US could soar to as high as 30% over the coming months.

This surge in unemployment is going to have a direct impact on lenders such as GM Financial. Delinquencies are going to increase, and the risk of full default on automotive loans will increase the longer that workers are unable to return to their jobs. In the worst case scenarios (say GM eventually needs some sort of bailout), shareholders will see immense loss of value – either through loss of dividends, and/or share price. The automotive bailouts were wildly unpopular a decade ago, and companies receiving bailouts this time around will likely face some sort of accountability as a result.

So to summarize, General Motors is on the cusp of some very difficult circumstances. The efforts to mitigate coronavirus are in the beginning stages of shocking GM from both the production and demand side of the equation. This will cripple the business, and put GM in “survival mode.” A dividend suspension is likely coming as part of these efforts.

To further complicate things, GM Financial could face losses similar to 2008-2009 should unemployment skyrocket in the coming months. GM Financial has large penetration rates, and finances more than a third of GM’s vehicle sales.

It is often an anecdote that investors should buy “when there is blood in the streets,” but sometimes you need to consider the fundamental flaws of the business model itself. General Motors (same could be said of Ford) is a highly capital intensive business model with exposure to both credit and economic cycle risks. General Motors seems more like a buzz saw, than an opportunity for long-term investors. For these reasons, we are keeping our distance.

If you enjoyed this article and wish to receive updates on our latest research, click “Follow” next to my name at the top of this article.