About three months ago, I published my first and only article on Darden Restaurants (DRI) and titled that “Mr. Market might soon offer a bargain.” When I wrote that title, it was a few days before the Chinese reported the first cases of COVID-19 to the WHO. It goes without saying that I didn’t have a clue at that point what was upon us and that only a few weeks later the (financial) world would be completely different.

It is always interesting when a stock is rising or falling in such a short timeframe in such a dramatic manner and we have to ask the question if the fundamental situation actually changed so dramatically. 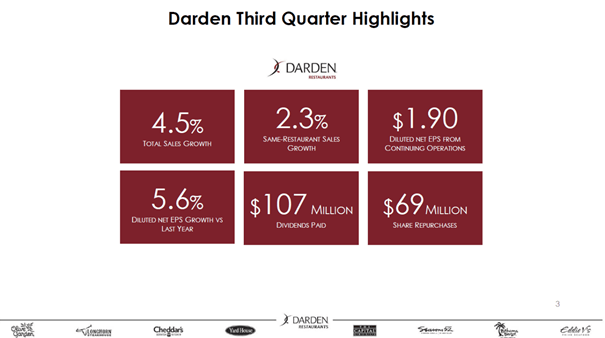 While Darden Restaurants paid $107 million in dividends in the last quarter, the company announced that the dividend will be suspended, which is a fine step forward. Although the great numbers from the last quarter would justify another dividend, these quarterly numbers don’t show any effects from COVID-19 yet and the near-term future for Darden Restaurants is looking bleak. Management also withdrew its full-year financial outlook for fiscal 2020.

Our job now is to try to predict the performance of Darden Restaurants in the next few weeks, months or quarters. And trouble begins with the fact that we really don’t know for how long Darden Restaurants’ business will be disrupted. And the problem is that the industry will probably face two disruptions – the first disruption we are already in is the customers staying away due to “social distancing” and states putting cities on lockdown. The second disruption that will most likely follow is a (steep) recession that will hit the United States and many other countries.

Let’s start with the potential second disruption – the recession that is upon us. And this might be the positive news in all this mess: when looking at Darden Restaurants’ performance during the last two recessions, we don’t have to be particularly concerned. In my last article, I wrote the following:

During the last two recessions, Darden Restaurants could increase its revenue every single year (revenue decreased a little bit in 2007 compared to 2006). Aside from revenue, the company could also increase its net income almost every year – net income decreased about 2% in 2003 and 2009.

So even if a recession should follow the pandemic (and in my opinion, it will), we shouldn’t be too concerned about Darden Restaurants. However, we have to be more concerned about the negative effects the lockdown and command of “social distancing” will have on Darden Restaurants’ business. During the earnings presentation, Darden Restaurants released the weekly same-restaurant sales by segment for the first three weeks of the fourth quarter. And while the first two weeks are showing no reason to be concerned, the third week (which is the week between March 9, 2020, and March 15, 2020) is showing same-restaurant sales declines between 15.9% for LongHorn Steakhouse and 27.7% for Fine Dining. 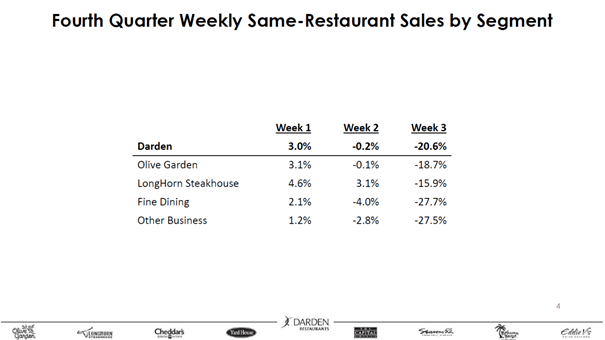 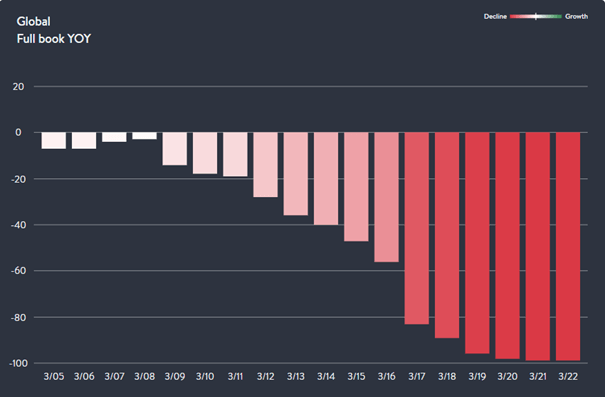 During the earnings call, management also stated that 60% of restaurants are mandated “ToGo only” and it will take about 6 to 10 team members to operate restaurants that offer only take-away food.

Let’s start with the “burn rate,” the amount of money Darden Restaurants will lose every week as this number can be calculated rather easily. Before the earnings call, I already tried to calculate an amount Darden Restaurants would lose every single week or month, in which the company is not generating revenue. Assuming that $2.4 billion annual expenses for food and beverage can be avoided as the company will probably stop ordering new food and beverage, these expenses will be rather small. Marketing expenses of $255 million can also be cut completely if necessary. But it is much harder to reduce general and administrative expenses of $405 million. Restaurant expenses of almost $1.5 billion are also difficult to cut as a big part is probably rent, which Darden Restaurants will have to pay in the coming months even if it doesn’t generate revenue. Restaurant labor expenses are about $2.8 billion and it is difficult to estimate how huge these expenses will be. Of course, Darden Restaurants can lay off employees, but it has to re-hire its staff later, which could also be a difficult task. In total, I came up with about $4 billion in annual costs – but I have to admit that this is only a rough estimate as I don’t have enough data or insight into the business to estimate the expenses adequately. This would result in about $75 million in expenses every week.

Duration of the crisis

Now we have to face the difficult task to estimate how long this “lockdown” will last and how severe the revenue for Darden Restaurants will decline. Usually we can look at the data during past recessions to get a feeling how severe revenue or earnings per share could decline, but data from a “normal” recession is useless. And although there were horrible pandemics in the past like the Great Plague or the Spanish Flu, we don’t have any reliable data how long such a lockdown could last. But we can look at China. While several cities and districts are still on lockdown, the lockdown has ended in other cities and even Wuhan seems to be back on its way to normality. As the lockdown in Wuhan and Hubei started on January 23, 2020, two to three months seems to be a realistic timeframe.

But we also have to point out that China imposed a brutal lockdown on its cities – especially on Wuhan and other cities in the Hubei province. As many other countries – including the United States – are rather moderate (and maybe more careless), it could take longer before the lockdown is effective to contain the virus in a similar way as China has obviously contained it so far.

The most realistic scenario in my opinion is a lockdown that will last about three months. For simplicity, we assume just three months without any customers and then a sudden return to normal conditions (which is of course unrealistic, but makes it easier to calculate). Additionally, we assume also a more severe scenario with six months and twelve months of lockdown.

In all three scenarios, I will assume that Darden Restaurants will also not be profitable in 2021 and we therefore assume a free cash flow of $0 for 2021. As mentioned above, the pandemic will most likely be followed by a recession, but in the past two recessions, Darden Restaurants was not really affected. For 2022, I will assume $700 million in free cash flow (similar number as in the last fiscal year) and following that about 6% growth until 2029 and then about 5% growth till perpetuity (the same numbers I also used in my last article). And when looking at Darden Restaurants’ long-term growth rate since 1993, net income increased more than 8% annually and Darden Restaurants was additionally buying back shares. Hence, 5-6% growth seems realistic.

Of course, these are all unrealistic, theoretical scenarios. It seems unlikely that there will be no customers for 6 months or 12 months as it is also unlikely that after that timeframe, revenue will immediately return to previous levels. But it will help us to determine what could happen to Darden Restaurants.

And suddenly, the balance sheet and debt levels seem to be extremely important while some weeks ago only a few people seemed to care about these aspects. Businesses with high debt levels could suddenly face major problems and companies like Darden Restaurants that face declining revenues could be in serious trouble. But with $322 million in cash and cash equivalents and the company also fully drawing on its $750 million credit facility, Darden Restaurants has about $1 billion to stay solvent in these turbulent times. The CFO Rick Cardenas stated on the earnings call: “We believe this positions us well to deal with potential near term volatility under the current market conditions.”

When assuming that Darden Restaurants will generate no revenue in the coming weeks and months, it could still stay solvent about 20 to 25 weeks. Darden Restaurants has also $929 million in long-term debt. However, when comparing it to $2,341 million in stockholders’ equity, we get a D/E ratio of 0.39 and such a ratio is usually no reason to be worried.

I bought Darden Restaurants last week – being fully aware that it is a kind of gamble. But with the analysis in mind that I presented above, I am quite confident that Darden Restaurants is undervalued when considering the cash flows the company can generate even in a very pessimistic scenario. Additionally, I am also confident that the cash is enough to withstand the storm that is upon Darden Restaurants and the company won’t go insolvent. And in that case, the stock could be a great investment over the long term with a yield of 15% or higher and – when the dividend will be reinstated – a dividend in the very high single or even double digits (depending at what price you bought).

For the short- and medium-term, I don’t want to make any predictions as the stock could rebound quickly or drop much lower and hence my “neutral” rating. But over the long run, I am very bullish and as we can expect a large number of restaurants won’t survive this crisis, Darden Restaurants could even take market shares after the crisis. In an interview, the CEO of Grubhub (GRUB) Matt Maloney is expecting that about 30% of restaurants could close as it is too expensive to run and many won’t reopen again and this is a huge opportunity for Darden Restaurants.

If you enjoyed the article and like to learn more about wide moats, please check out my marketplace service: Moats & Long-Term Investing.

Subscribers get access to extensive background information on wide-moats, at least weekly exclusive research, a watchlist of wide moat companies and a chatroom where members can ask questions and exchange opinions about long-term investing and companies with a competitive advantage.

For investing in companies that can beat the market over the long term and create a portfolio with companies you can (almost) hold forever, please check out my marketplace service. You can also take advantage of a free trial offer.

Disclosure: I am/we are long DRI. I wrote this article myself, and it expresses my own opinions. I am not receiving compensation for it (other than from Seeking Alpha). I have no business relationship with any company whose stock is mentioned in this article.