As the stock markets enter panic mode, the furious sell-offs tend to impact the whole spectrum of companies, notwithstanding their market position, financial health or future growth prospects. As a result, besides huge losses, the panic times can also lead to some extremely attractive long-term opportunities. As Baron Rothschild said: “Buy when there’s blood in the streets, even if the blood is your own.” And there is a lot of blood in the streets right now.

In this series of articles, I want to present several companies that experienced huge share price declines, although their longer-term prospects are very good. In other words, companies that represent a very attractive buying opportunity at their current prices. However, I must stress that the current market situation is very complicated, and there is no warranty that the companies, although cheap, won’t get even cheaper before they start to recover. A bargain today may become an even bigger bargain tomorrow. This is why investors should be very cautious, not bet all money on one card, and not bet it at once.

The previous articles in this series were focused on Fortuna Silver Mines (FSM), RNC Minerals (OTCQX:RNKLF), Ivanhoe Mines (OTCQX:IVPAF) and Gran Colombia Gold (OTCPK:TPRFF). This one focuses on Excelsior Mining Corp. (OTCQX:EXMGF), an American company that has recently completed the development of its low-cost Gunnison copper mine and expects first copper production in Q2. Although the copper prices are weak and some issues were encountered during the production start-up, the upside potential is worth the risks.

Excelsior’s Gunnison mine is located in south-eastern Arizona, approximately 100 km to the east of Tucson. The 100% Excelsior-owned project contains reserves of 4.5 billion lb copper, at a copper grade of 0.29%. Although the grade doesn’t seem too impressive, it doesn’t matter too much, as Gunnison is not a conventional copper mine. The copper will be extracted using the In-situ Recovery (“ISR”) mining method. First, a weak acid will be injected into the deposit via the delivery wells. The acid will dissolve the copper into a copper-rich solution. The solution will be subsequently extracted using the recovery wells. At the surface, the copper-rich solution will be processed in a Solvent-Extraction Electrowinning (SX/EW) plant. The result of the whole process will be high-purity copper cathodes. According to Excelsior, the deposit is well-suited for ISR mining, as it is situated below the water table and the ore is naturally fractured and permeable.

Due to the ISR mining method, the environmental impacts of the mine should be relatively small; moreover, the production costs should be low. The CAPEX needed to reach the final production capacity of 125 million lb copper per year is $430 million, according to the feasibility study. This is why Excelsior decided to develop the whole project in three stages. The Stage 1 operation is almost complete (it is being optimized right now), and copper production should start in Q2. It cost $50 million, and the production volume is 25 million lb copper per year. To finance the CAPEX, Excelsior sold a copper stream to Triple Flag. Under the streaming agreement, Triple Flag is entitled to receive 16.5% of the Stage 1 production, 5.75% of Stage 2 production and 3.5% of Stage 3 production, at a price equal to 25% of the copper spot price. Moreover, Triple Flag has an option to increase the stream by contributing $65 million to the Stage 2 CAPEX, and Excelsior has an option to reduce the stream by making a buy-down payment.

The construction of the Stage 2 operation, with an annual production capacity of 75 million lb copper per year, should cost further $150 million. And the final expansion should cost an additional $230 million. The final production capacity is projected at 125 million lb copper per year. The ISR mining method should lead to very low production costs. The AISC was originally estimated at $1.23/lb. The Stage 1 financing (the copper stream) should elevate it to $1.33/lb copper; however, it is still a very low number that should ensure Excelsior a place among the lowest-cost copper producers. This is important, especially now when the copper prices keep on declining and are only around $2.1/lb.

The Gunnison mine has really impressive economics. At a copper price of $2.75/lb (which will probably turn out to be quite conservative in the long term, given the expected growth in global copper demand and decline in global copper supply), the after-tax NPV (7.5%) equals $730 million and the IRR equals 35.6%.

A very important feature of Excelsior is its expected low production costs. While many producers will have serious trouble at copper prices around $2/lb, Excelsior should do relatively well. Especially given the fact that it is almost debt-free. The company’s debt was only $0.2 million as of the end of Q3 2019 (the Q4 numbers haven’t been released yet), and it held cash of $30.2 million. Although a big part of the cash was used to complete the mine construction, the company should have enough financial flexibility, as on November 1, it secured a $15 million credit facility, which can be drawn in three tranches of $5 million each, if needed. The facility should mature on February 1, 2021, but it can be extended until February 1, 2022.

Of course, there are several risks. As explained above, Excelsior should be able to survive even a prolonged period of low copper prices. On the other hand, it will mean some delays in the mine expansion schedule. As Excelsior intended to fund the Stage 2 and Stage 3 expansions primarily from internal cash flows (maybe supplemented by debt or copper stream financing), the original plan was to develop Stage 1, followed by Stage 2 three years later and by Stage 3 another three years later. It means the full production to start in 2026 or 2027. Moreover, there were also some speculations that under the right market conditions, Stage 2 could be skipped and the mine could jump from 25 million lb copper per year directly to 125 million lb copper per year. At a copper price of $2/lb, Excelsior is expected to generate a free cash flow of around $13 million per year. It should be enough to survive until the copper prices recover, however, not enough to fund the Stage 2 expansion. The good news is that the longer-term copper market fundamentals are good and copper prices should recover sooner or later.

Another risk is related to the Stage 1 ramp-up process. Although the ISR mining is not new, it is commonly used for uranium extraction. Last year, Taseko Mines (TGB) very successfully tested ISR copper mining at its Florence Project pilot plant, but some problems may emerge during the start-up of a new mine. And in the case of Excelsior, they did. Excelsior announced the completion of construction and start-up of wet commissioning on October 9. The delivery of mining fluids in the orebody commenced in early January, and first copper production was expected in Q1. On January 8, Excelsior even announced some positive initial wellfield results. However, on February 4, the company announced that based on the collected data, it decided to realize an optimization program. The main change is the reconfiguring of wells so that they can be used as injection as well as recovery wells, which should improve the flexibility of the whole wellfield. The news release also stated:

These upgrades were planned to take place over time once nameplate production had been achieved; however, the Company has decided to implement these changes now during the ramp-up period to assist with breakthrough and production optimization. These changes are not material in terms of capital outlays, but this work is expected to push first copper production to Q2, 2020.

The March 2 news release confirmed the aim of first copper production in Q2. Moreover, it indicated where the problem was:

The current configuration of the wellfield comprises 70-foot spacing between injection and recovery wells. By making the wellfield reversable, Excelsior will have the option of moving mobilized copper only a portion of the full distance between the wells before reversing the fluid flow; thereby reducing the effective distance that the copper must travel before it is recovered. This new capacity to move fluids back and forth (push and pull) is expected to help achieve breakthrough, at which point copper would remain in solution throughout the production process.

As the optimization program should be completed in March, it is possible to expect first copper production probably in May. 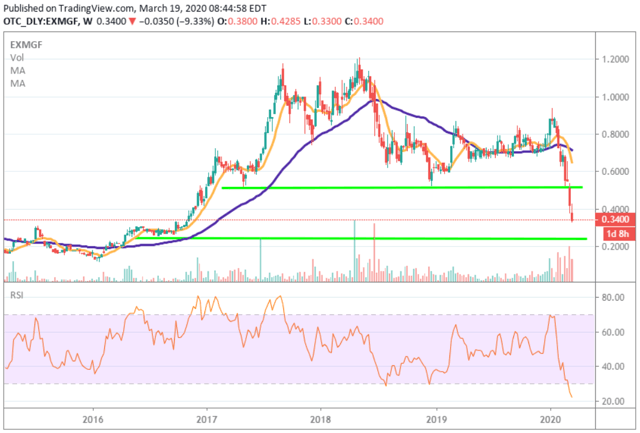 Excelsior’s recent share price peak was reached in early January, at $0.94. However, the announcement of the optimization program and the delay of first copper production started to weigh on the share price heavily. Later, the coronavirus-related market panic emerged and Excelsior kept on falling. Its share price is only $0.34 right now, which is 64% below the January high. Although the RSI is slightly above 20, which indicates that the shares are strongly oversold, the copper price keeps on falling and the possibility that Excelsior will approach its old support around $0.25 cannot be excluded.

Excelsior’s market capitalization is $82 million. At a copper price of $2/lb (it is $2.1/lb right now) and resulting free cash flow of $13 million, the price-to-free cash flow stands only at 6.3. It is a very low value, given low jurisdiction risk. It is possible to argue that a part of the discount is attributable to the ramp-up issues. However, this problem should be solved soon. The initial production capacity is unimpressive, but the reason for investing in Excelsior is not the Stage 1 operation but the Stage 3 operation, with a production capacity of 125 million lb copper per year, at a low AISC of $1.33/lb. However, it is important to note that although Excelsior Mining looks like a good long-term buy, the financial markets are extremely volatile right now and it is possible that Excelsior will go even lower before it starts to go back up. The best strategy is to build a position, only slowly, not by investing all the dedicated sum of money at once.

Disclosure: I am/we are long EXMGF, IVPAF, RNKLF, TGB. I wrote this article myself, and it expresses my own opinions. I am not receiving compensation for it (other than from Seeking Alpha). I have no business relationship with any company whose stock is mentioned in this article.