Today, we will see why March 2020 can be a good entry point for Applied Therapeutics (APLT).

Founded in 2016 and headquartered in New York, Applied Therapeutics is a clinical-stage biopharmaceutical company focused on the development of novel drug candidates against validated molecular targets in highly underserved indications with no existing therapies. The focus on targeting pathways with known roles in pathogenesis and opting for abbreviated regulatory pathways enables the company to develop drugs quickly at a lower cost.

The company’s lead asset, ARI (aldose reductase inhibitor) AT-001 is being evaluated in DbCM (diabetic cardiomyopathy) indication. The company is also studying a central nervous system penetrant ARI, AT-007, for the treatment of Galactosemia. Finally, Applied Therapeutics is studying preclinical asset, AT-003, in diabetic retinopathy indication.

Galactosemia is a rare genetic metabolic disease caused by the inability to break down galactose. The disease manifests in significant CNS (central nervous system) complications such as motor, speech, cognitive, and psychiatric impairments, tremors, and seizures as well as cataracts and ovarian insufficiency in females.

Currently, the SOC (standard of care) involves mandatory newborn screening and initiating the baby on the dairy-free diet. Although dietary restrictions help prevent fatalities, they do not prevent long-term consequences of the disease. Currently, there are no approved therapies for this indication. 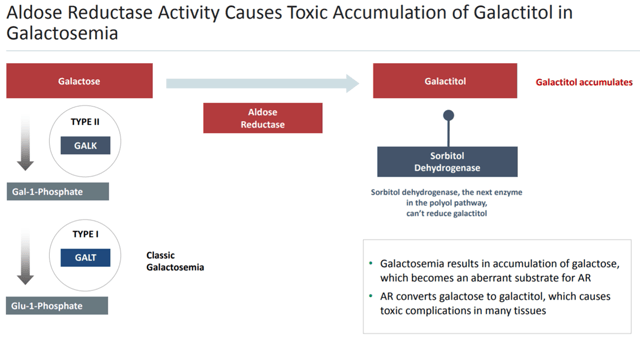 AR is known to play a key role in the pathogenesis of the disease and converts galactose to a toxic metabolite, galactitol. Hence, AR inhibitor, AT-007 is expected to work in this indication.

Currently, there are around 2,800 Galactosemia patients in the U.S. and around 3,500 in Europe. There are 80 newborns suffering from this disease every year in the U.S., while the incidence in Europe is higher. However, since all patients undergo mandatory newborn screening for this condition, it is easier to identify this patient population.

Applied Therapeutics sees this as a major growth opportunity, considering that the prescriber base is highly concentrated. More than 90% of patients are being treated by around 20 specialists worldwide. The prescribers, themselves, are highly aware of the ongoing clinical development programs in this indication. This reduces the burden of creating awareness on the company’s sales team. The company has also opted for biomarker-based development under FDA’s new guidance permitting biomarker-based development in low prevalence, slowly progressing rare metabolic diseases, such as Galactosemia. 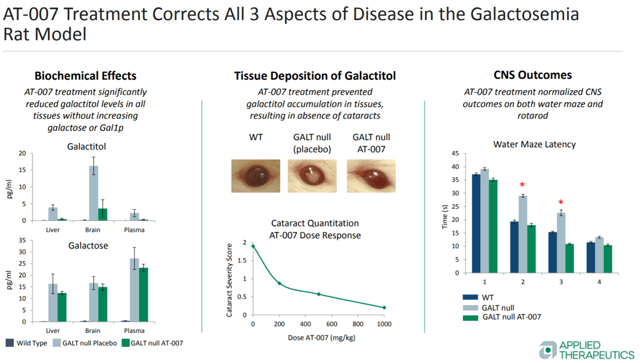 AT-007 has already demonstrated efficacy in the Galactosemia Rat Model.

In January 2020, the company announced positive topline results from the Pivotal Phase 2 portion of the ACTION-Galactosemia study of AT-007 in adult Galactosemia patients. 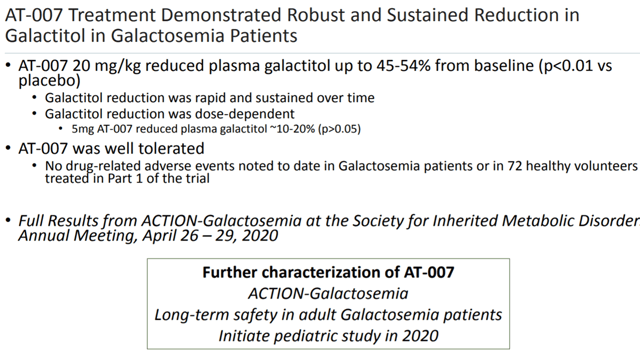 The key biomarker outcome selected was the reduction in galactitol. The drug demonstrated a statistically significant and sustained reduction in galactitol as compared to the placebo. Reductions were dose-dependent. AT-007 also demonstrated significant plasma galactitol reduction of ~50% (p<0.01). AT-007 was well tolerated, with no drug-related adverse events noted. The company now expects to file NDA for AT-007 in Galactosemia indication in the second half of 2020.

AT-001 can emerge as a blockbuster in diabetic cardiomyopathy indication

Currently, there exist no approved therapies or major investigational candidates for this indication. Novartis’ (NVS) Entresto is approved for Stage 4 heart failure and is already a blockbuster. 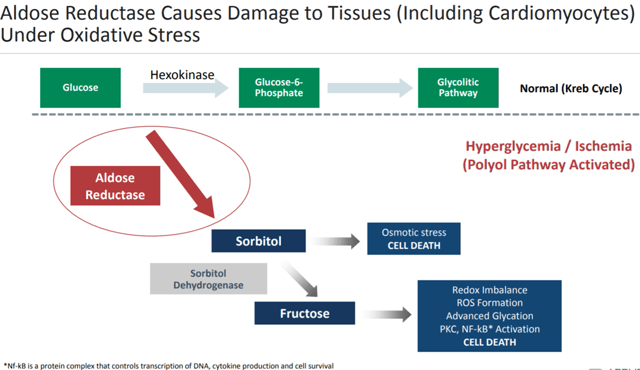 Here again, AR plays a key role in the pathogenesis of diabetic cardiomyopathy. This is well supported by preclinical and clinical evidence. This has been proved by Pfizer’s (PFE) ARI, zopolrestat, achieving proof-of-concept on LVEF (left ventricular ejection fraction) in Phase 2 Diabetic Cardiomyopathy trial.

AT-001 has proven to be 1000 times more potent than zopolrestat in vitro and in vivo models. The drug is also reported to have broad exposure, both to cardiac and nerve tissue. Finally, the maximum tolerable dosage was more than 2000mg/kg. 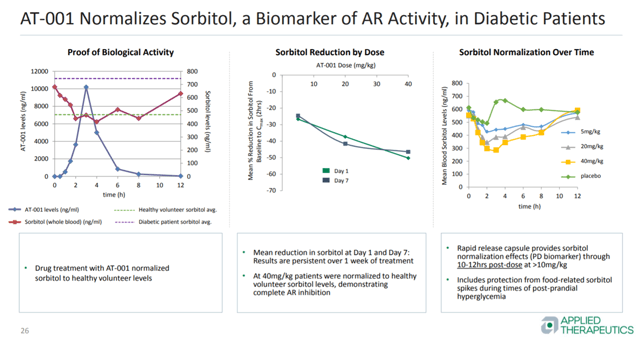 AT-001 has already demonstrated proof of biological activity in a Phase ½ study. Target engagement and AR inhibition were demonstrated by significant reductions in sorbitol, a pharmacodynamic biomarker of AR activity. AT-001 improved selectivity and affinity for AR which resulted in potent AR inhibition. Besides, the value of blood-based cardiac stress biomarker, NTproBNP, is elevated in diabetic cardiomyopathy patients. AT-001 also reduced these levels over 28 days of treatment. AT-001 was well tolerated at all doses tested.

In September 2019, Applied Therapeutics announced the commencement of Phase 3 registrational trial, ARISE-HF, evaluating AT-001 in diabetic cardiomyopathy indication. Topline data from this trial is expected in 2021. 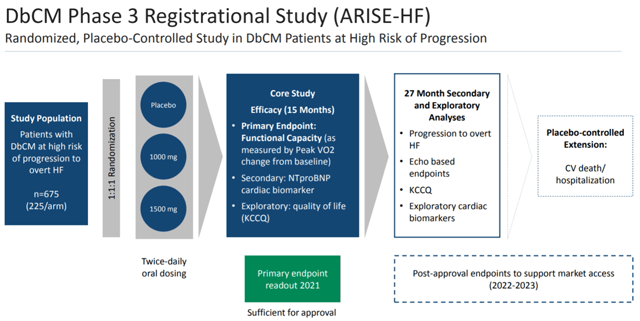 The company expects AT-001 to emerge as a blockbuster, despite limited capital investment. To secure FDA approval, a company requires to demonstrate improvement based on a well-defined endpoint of functional capacity with the investigational drug in diabetic cardiomyopathy patients. FDA also requires only one successfully completed Phase 3 trial for filing an application for such a drug.

Further, although the disease prevalence is significant both in the U.S. and worldwide, there is also high disease awareness. This patient population can be targeted with limited commercial investment. The disease can be easily diagnosed and tracked by cardiologists through a 2D echo test. Endocrinologists and PCPs (primary care practitioners) can also identify the condition through a simple blood test (NTproBNP cardiac stress biomarker).

Investors should consider these risks

The growth prospects of Applied Therapeutics are highly dependent on clinical and commercial prospects of AT-001 and AT-007. This exposes the company to significant R&D failure risks and potentially high share price volatility.

Applied Therapeutics is a loss-making company and may continue to be so for many more years. This may affect valuations. The company also does not have any experience in securing product approvals and product commercialization.

What price is right for the stock?

According to finviz, the 12-month consensus target price for Applied Therapeutics is $54. On February 27, Barclays analyst Carter Gould initiated coverage for the stock with an Overweight rating and $64 price target. The analyst is optimistic about the company’s 2021 galactosemia launch and diabetic cardiomyopathy readout in 2021. The analyst also sees “significant optionality” related to ex-U.S. rights for AT-001 and AT-007 programs.

On January 27, UBS analyst Navin Jacob reiterated Buy rating and increased target price from $20 to $65. He is optimistic about the phase 2 data for AT-007 which can prove to be a step ahead in the path to “biomarker-based approval”. He is now awaiting data from the Phase 3 ARISE-HF trial. 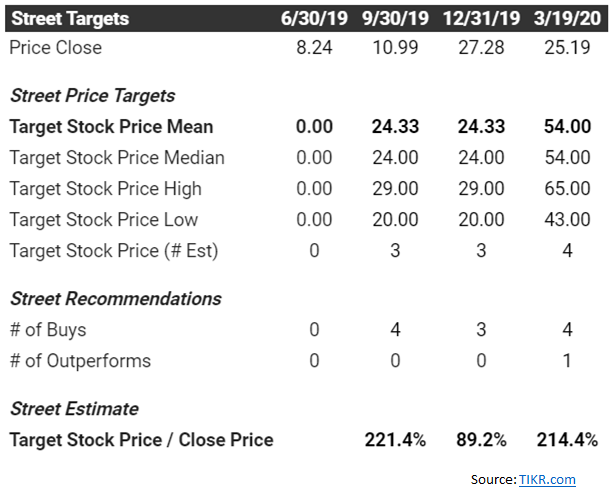 We see a dramatic increase in target price and improvement in overall analyst sentiment for the stock since June 2019.

At the end of December 2019, the company had cash worth $38.9 million on its balance sheet. The company also raised gross proceeds of $143.4 million from equity dilution in January 2020. In 2019, the company spent $36.3 million in cash on operating activities. Assuming an increased annual cash burn rate of around $50 million to account for advancing research programs, the company seems to be in a position to sustain its operations at least till the end of 2021.

In this backdrop, I believe that the target price of $54 is a fair estimate of the true potential of this stock. Applied Therapeutics is a risky pick, considering that it has no approved product. However, it has a favorable risk/reward ratio and can be suitable for an aggressive biotech investor with an investment horizon of one to two years.