Many retail investors get excited when they see low P/B or EV/EBITDA multiples. This is often a reason for inexperienced investors to conclude that a company is trading cheaply and hence presents a good investment opportunity.

Although it is important to buy good companies at a reasonable or preferably low price, simply looking at how far multiples have gone down relative to peers does not give you the right information.

AB InBev (BUD) in my opinion is a perfect example of such behaviour. Once you start digging deeper into the company’s financials and strategy problems start to emerge.

If trading multiples are adjusted properly and more data is incorporated into one’s analysis the low price of BUD not only seems justified but is also subject to significant downside risk.

Recent black swan like events have also created a perfect storm kind of environment for BUD’s already struggling business. Closure of all kinds of recreational and sport businesses would hit beer breweries hard while liquidity issues in the commercial paper market will also weigh in on highly leveraged businesses – both impacting BUD.

P/B ratio is low for a reason

An inexperienced investor could easily get attracted by the fact that BUD now trades at book value with P/B of x1.0, especially given the fact that there is a gap between BUD’s P/B ratio and its currently high return on equity (ROE).

Although ROE is often the main driver of P/B ratios, in this case there another factor at play – the share of intangible to total assets.

In BUD and Molson Coors (TAP) cases, book value of intangible assets makes more 70% of total assets which is the main reason why these two companies trade at such book value low multiples. To get an idea of why this is, we should assess the risk of these intangibles.

The majority of BUD’s intangibles is goodwill booked as part of the 2016 takeover of SABMiller. As a result of the acquisition $72.4bn was recorded as goodwill, with management stating the following reasons:

The combination with SAB resulted in 72.4 billion US dollar of goodwill allocated primarily to the businesses in Colombia, Ecuador, Peru, Australia, South Africa and other African, Asia Pacific and Latin American countries. The factors that contributed to the recognition of goodwill include the acquisition of an assembled workforce and the premiums paid for cost synergies expected to be achieved in SAB. Our assessment of the future economic benefits supporting recognition of this goodwill is in part based on expected savings through the implementation of best practices such as, among others, a zero based budgeting program and initiatives that are expected to bring greater efficiency and standardization, generate cost savings and maximize purchasing power.

Of that amount $6.1bn was written off as part of the deal to sell Carlton & United Breweries (previously part of SABMiller) to Asahi last year. Thus at present the goodwill related to SABMiller stands at $66.3bn or 28% of BUD’s assets. More importantly, this amount is around 75% of BUD’s market capitalization at the moment . In other words, by purchasing a $1 worth of BUD shares, new investors pay 75 cents for the goodwill assets described above – unspecified cost synergies and zero based budgeting programs.

Using the relationship between Intangible Assets to Market Cap and P/B ratio we could estimate BUD’s future P/B ratio.

If BUD impairs the whole amount of its SABMiller goodwill of $66bn, the company would have $62bn worth of intangible assets left or 70.8% of current market capitalization. Based on the relationship above this would result in a P/B ratio of BUD of x2.15 (at current prices) or in line with that of Heineken.

Of course, this an extreme scenario but the probability of a goodwill impairment has increased significantly over the past couple of months.

EBITDA multiples are not showing the full picture

Similarly to P/B ratio, many investors flock to BUD due to its low EV/EBITDA multiple, which again seems to be at odds with the company’s high EBITDA margin.

It is surprising how much focus is put on BUD’s high EBITDA margin when in fact Cash Return on Capital Invested (CROCI) exhibits a much stronger relationship with EV / EBITDA multiples.

Based on AB InBev’s last twelve months CROCI, the company’s low EBITDA multiple seems justified. More importantly, however, this already low rate of return on capital would come under severe pressure over the coming quarters for two reasons:

There are two ways to compete in the brewery industry – differentiation through innovation and strong brands that drive volume premiums and economies of scale.

Through the acquisition of SABMiller, AB InBev has improved both of these competitive advantages – added the much needed scale to lower costs while adding well-established brands.

Economies of scale are a significant competitive advantage in a commoditized industry with high barriers to entry such as beer brewing. However, this strategy could easily spell a disaster as innovation becomes more important and customer preferences shift towards local and craft breweries at a time when overall beer volumes are declining. 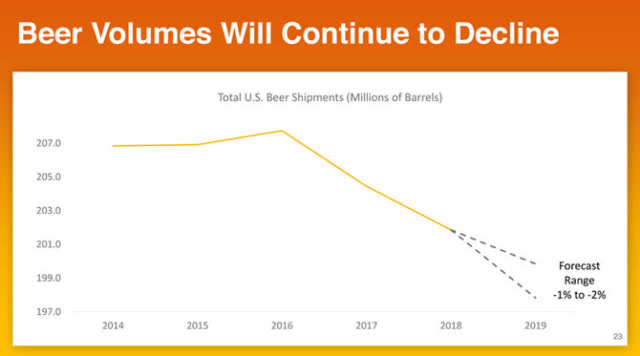 Needless to say, AB InBev has already been selling many parts of the SABMiller business, beyond the regulatory requirements, at a much lower multiples than it paid for the whole company.

Nevertheless the numbers are undisputed: to get the deal approved by regulators and then to manage debt, AB InBev has sold off parts of SABMiller worth nearly one-third of the target’s one-time enterprise value of $122.5bn. In doing so, AB InBev lost just under half of the $7.1bn in earnings before interest, tax, depreciation and amortisation that it acquired through the SABMiller, according to Jefferies analyst Ed Mundy. The average multiple fetched by the disposals was 10.2 times ebitda, against the 17.3 times that AB InBev paid for the brewer.

On one hand this means that high margins parts of the SABMiller business are being sold thus negatively impacting margins, but also affecting AB InBev’s initially expected synergies and economies of scale.

Post the mega deal for SABMiller, AB InBev has been following a similar severe cost cutting strategy as adopted by the 3G capital in the Kraft-Heinz deal. Needless to say how this all ended for KHC.

As of today AB InBev’s significantly lower administrative expenses in relation to sales is the only expense area where it has an edge against the second largest brewery – Heineken.

Not surprisingly, AB InBev organic growth has also been lagging that of the second largest competitor – Heineken.

Comparing this with Heineken organic revenue growth figures does not paint a positive picture for the extreme cost cutting measures.

In 2019, we delivered another year of superior top-line growth. Net revenue (beia) organic growth was up 5.6%, well balanced with an increase of 3.1% in consolidated beer volume and net revenue (beia) per hectolitre up 3.3%.

In a nutshell, BUD’s high EBITDA margin would most likely suffer in the coming years, thus reducing the CROCI and adding more pressure on the company’s EV/EBITDA multiple.

Not only is AB InBev faced with the problems described above, but there’s also the elephant in the room – the huge debt load.

It almost feels like a perfect storm for AB InBev with the shift in customer preferences on top of the global declining beer volumes. This also comes at a time when liquidity has disappeared in the commercial paper market which poses a significant risk for highly leveraged companies such as AB InBev. Add the complete shutdown of the recreational, travel and sports industries and AB InBev suddenly appears as an extremely risky investment even when trading multiples are at such depressed levels.

Although the company managed to stretch its debt maturity profile in 2019, there are significant payments outstanding in 2020.

It is not surprising then that out of the 4 breweries reviewed, AB InBev was the first (and so far the only) to announce such drastic measures:

AB Inbev has drawn down the entirety of a $9bn loan facility from global banks as it bids to ride out the coronavirus outbreak.

Again I will contrast this response with that of the second largest brewery – Heineken, which so far is relying on the fixed income market:

Liquidity problems are present at AB InBev, while the company’s interest coverage has been run at a dangerously low levels during the supposedly good years prior to 2020:

Even if BUD avoids liquidity issues, the company will likely be forced to sell other business divisions at depressed multiples. The company will also need aggressively pay down its debt at a time when the industry is facing the need of increased investments and leaner corporate structures.

Despite the recent drop in BUD’s share price I still consider it a highly risky investment. The company will experience significant headwinds on its cash return on capital invested, while recorded intangible assets and goodwill would also come under scrutiny over the coming months.

The large scale of the business, which has been a significant competitive advantage, would also play a diminishing role in an industry where innovation is picking up and craft beers are weighing on demand for well-established premium lagers.

This coincides with a major shock for the industry in the face of the Covid-19 pandemic which resulted in closure of clubs, bars, restaurants and cancellation of major sports events.

Finally, BUD’s huge debt load which came as a result of the questionable rationale for the SABMiller deal would make the matters worse and increase the left tail risk for the company.

Additional disclosure: Please do your own due diligence and consult with your financial advisor, if you have one, before making any investment decisions. The author is not acting in an investment adviser capacity. The author’s opinions expressed herein address only select aspects of potential investment in securities of the companies mentioned and cannot be a substitute for comprehensive investment analysis. The author recommends that potential and existing investors conduct thorough investment research of their own, including detailed review of the companies’ SEC filings. Any opinions or estimates constitute the author’s best judgment as of the date of publication, and are subject to change without notice.