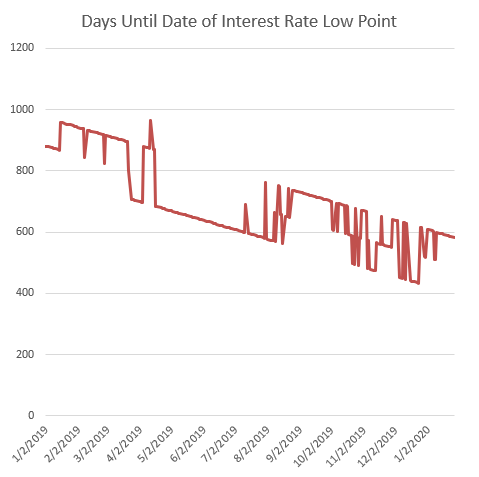 I never put this observation to intensive statistical scrutiny, but it was a pattern that I saw.

Today, we might look at another pattern. Since the short end of the yield curve inverted in late 2018, one way we could think about the Fed’s posture is to infer from Eurodollar futures markets what the expected last rate cut will be. The further into the future that expected last cut occurs, the longer we can expect the Fed to have taken a somewhat too-tight posture.

It’s not actually that easy to measure, because the curve has more of a bowl shape than a V-shape, so there are several quarters that could be called the bottom. But I thought it might be worth seeing.

But the bottom is about the same as it was about 6 months ago. If the bottom happens to jump up another quarter, we could be in a situation similar to the QEs. Maybe if the Fed holds rates steady, the date of the future rate bottom will move forward in time, and if the Fed drops rates enough, maybe we will continue on that trajectory to mid-2021.