Sierra Bancorp’s (BSRR) fourth quarter 2019 earnings were mostly in line with expectations with no big surprises. Going forward, earnings are likely to slightly decline as an increase in net interest income is expected to be undermined by the impact of higher provisions charge and a natural increase in operating expenses. Overall, earnings are expected to dip by around 3.5% this year. BSRR is currently trading at a price slightly above the one-year ahead target price, hence, I’m adopting a neutral rating on the stock.

After remaining mostly subdued in 2019, I’m expecting BSRR’s provisions charge for loan losses to increase in 2020 by around 10% year over year. This expectation is to some extent attributable to a single $2.8 million loan that was only partly charged off in the fourth quarter. As mentioned in the earnings release, BSRR recorded a partial charge-off of $1.2 million on that particular loan in the fourth quarter of 2019. To be conservative I’m expecting that the company will be unable to resolve the bad debt, and hence book the rest of the charge-off in 2020.

Provisions charge is also expected to receive a boost from the adoption of ASU 2016-13 accounting standard that has changed the methodology used for calculating allowances for loan losses from the incurred-loss model to the Current Expected Credit Losses model, or CECL. I’m expecting provisions charge to be higher in 2020 as CECL will require provisioning for expected losses as new loans are originated, while the old model required provisioning as loss was incurred. In addition to the ongoing provisioning charge, CECL is also expected to have a one-time large impact on allowances that will flow directly into equity without affecting the income statement. The earnings release mentions an estimated impact of around $12 million.

I’m expecting BSRR’s net interest margin, NIM, to be mostly stable in 2020 as no further Fed funds rate cuts are expected this year. In addition, the lagged impact of last year’s rate cuts on yields is expected to be negated by a somewhat commensurate fall in funding cost. I’m expecting cost to be lower in 2020 due to the improvement in deposit mix in the last quarter of 2019. BSRR reduced customer time deposits by 8% in the last quarter while increasing demand and saving deposits, which will lead to lower costs this year. Overall I’m expecting BSRR’s average NIM in 2020 to be a basis point below the average in 2019, as shown in the following table.

The negative impact of the slight dip in NIM on net interest income is expected to be countered by continued expansion in the loan portfolio. I’m expecting BSRR’s loan portfolio to continue to grow at a low rate in 2020 as a result of decent economic growth prospects in the company’s operating regions in California. The state’s leading index was reported at 1.93 for December 2019, implying continued economic growth in the coming quarters. However, some pressure is expected from strong competition for earning assets in California, as mentioned in the earnings release. Consequently, I’m expecting BSRR’s loan portfolio to increase by 2% in 2020, as shown in the table below. The table also presents forecasts for other key balance sheet items. 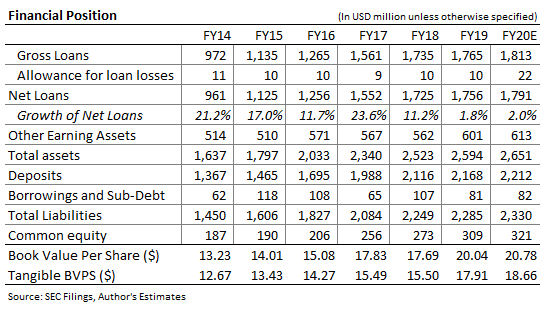 As a result of the combined effect of changes in NIM and loan portfolio size, net interest income is estimated to increase slightly by 1.3% year over year in 2020.

BSRR has been regularly increasing dividends over the past few years, but because of the prospects of earnings decline in 2020 I’m assuming that the company will hold quarterly dividend constant at the current level throughout this year. This will lead to an expected dividend of $0.76 for the full year, which implies dividend yield of 2.73%. A dividend cut is unlikely despite the expectations of a fall in income, because the payout ratio suggested by the earnings and dividend estimates is at a comfortable level of 33.8%.

I’m using the historical price to book value multiple, P/B, to value BSRR. The stock has traded at an average P/B multiple of 1.31 in the past as shown below.

Due to the slight price downside, I’m adopting a neutral rating on BSRR. The rating given in my previous article on the stock was also neutral, but the previous target price was slightly higher. The change in target price is attributable to the new estimated book value per share being lower than my previous estimate because I’m now expecting CECL impact to be higher than my previous expectation. As the current market price is slightly below the one-year ahead target price, the stock does not appear to be attractive at the current level. Instead of investing at the current market price, I think it is better to wait till the price drops to at least $24.7, which is 10% below the target price.

Additional disclosure: Disclaimer: This article is not financial advice. Investors are expected to consider their investment objectives and constraints before investing in the stock(s) mentioned in the article.