It is always a challenge to attempt to pick a bottom in a commodity, especially when that market as volatile as natural gas. The price action in the natural gas futures arena has been bearish since early November when the price failed at $2.905 per MMBtu on the nearby NYMEX futures contract. Last week, the price fell to the lowest price since 2016 and the lowest price in January this century, which is already two decades old.

In November 2018, the price rose to a high of $4.929 per MMBtu. The natural gas futures were over 62.8% below that high last week, and if the price were to drop less than half the price at the high, the energy commodity would be like short-term European interest rates in negative territory. The energy commodity will not trade below $0.00 per MMBtu, although the current price action feels like it could get close.

In 2016, when the price fell to $1.611 at the end of the peak season for demand, it looked like natural gas would continue to fall into a bearish abyss. The same scenario could be on the horizon in the coming weeks, and perhaps months. In 1650, English theologian Thomas Fuller said, “It’s always darkest before the dawn.” Anyone involved in the natural gas future market, and those who buy and sell the triple leveraged Velocity Shares 3X Long Natural Gas ETN (UGAZ) and its bearish counterpart (DGAZ), should keep Thomas Fuller in mind these days. The price of natural gas has been in a bearish abyss throughout the winter of 2019/2020.

A gap to the downside after a bearish technical event

On January 17, the price of nearby natural gas futures fell below the psychological $2 per MMBtu level for the first time since 2016. The move to the downside put in a bearish reversal on the weekly chart.

The weekly chart shows that natural gas moved to a marginally higher high than the prior week of $2.255 per MMBtu during the week of January 13 and then closed below the previous week’s bottom. The bearish reversal led to a gap to the downside as natural gas opened the week of January 20 at $1.97 and only reached a high of $1.98 last week. The current void on the chart sits from $1.98 to $1.994 per MMBtu. Weekly price momentum and relative strength measures have declined into oversold territory. Historical volatility at the 37.19% level declined from over 53% in December. The historical price variance measure is at a low level for this time of the year in the middle of the peak season for the demand for the energy commodity. Meanwhile, the open interest metric rose steadily from 1.160 million contracts in early November when the price reached its high at $2.905 to 1.496 million at the end of last week. The increase of 336,000 contracts or 29% as the price fell is typically a technical validation of the bearish price trend in a futures market.

The lowest level in January since 1999

We are in the middle of the winter season, which is the time of the year when demand for heating and natural gas across the US tends to peak. However, the price is trading at a level that would better reflect the end of winter these days. At last week’s low of $1.83 per MMBtu, the energy commodity was trading at its lowest price for January in twenty-one years.

The monthly chart shows that the last time natural gas traded below the $1.83 level during January was in 1999 when the price reached a low of $1.6950 per MMBtu.

The Energy Information Administration provided no surprise when they released supply data on Thursday, January 23. 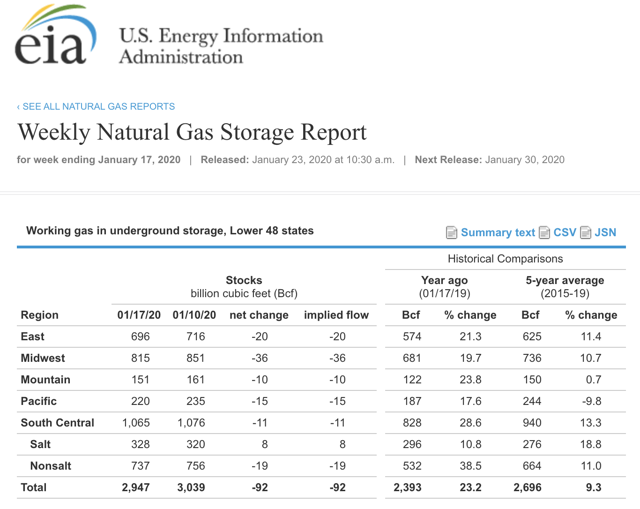 The chart shows that stockpiles declined by 92 billion cubic feet for the week ending on January 17. Inventories stood at 2.947 trillion cubic feet, which was 23.2% above last year’s level and 9.3% above the five-year average for this time of the year. With approximately nine weeks to go until the beginning of the 2020 injection season when natural gas stockpiles begin to rise, we would need to see an average withdrawal of 204.5 bcf to reach last year’s low at the end of the peak season of 1.107 tcf. The highest withdrawal level of this season was only 161 bcf, so we will not come anywhere near last year’s level at the end of this winter. The high level of stocks continued to weigh on the price of natural gas and pushed the price below the $2 per MMBtu level.

The ten-minute chart of natural gas futures on January 23 shows that the price attempted to recover after the release of the EIA data. The price traded up to a high of $1.98 and ate into the gap on the chart by one cent. However, selling stopped the futures market from filling the void, and the price settled at $1.926 on Thursday, and below the $1.90 per MMBtu level at the end of last week.

The price action in the natural gas market has created a paradise for speculative and trend-following shorts.

Price momentum and relative strength on the monthly chart are both in oversold territory. Monthly historical volatility at 26.5% is close to its lowest level since 2018. Meanwhile, the open interest metric is climbing towards the all-time high, which stands at just over 1.68 million contracts in October 2018. The high level of speculative positions at least partially fueled the move to $4.929 per MMBtu in November 2018.

Natural gas is a commodity that looks its worst when it is at or near the lows and best when the price seems like it is going to the moon. Given the time of the year, the high level of stocks, and bearish price trend, we could expect the energy commodity to continue to make lower lows. Any attempt at a recovery is likely to attract selling by those adding to existing short positions or those who have already filled their pockets with profits from short positions since November 2019. However, the chart is now riddled with gaps, and eventually, the energy commodity will find a bottom.

One of the factors that could prompt a rally later this year is uncertainty over US energy policy in the aftermath of the 2020 Presidential election. If the opposition defeats President Trump, the Green New Deal could cause lower oil and gas output in the US starting in 2021. Therefore, we could see lots of volatility as what promises to be, the most contentious election in US history approaches.

While I believe that natural gas will continue to move to lower lows over the coming weeks, the risk-reward of a short position does not justify a position for me. The potential for a recovery increases with each new low. Therefore, I will be looking to purchase the Velocity Shares 3X Long Natural Gas ETN or the United States Natural Gas Fund, and unleveraged ETF product on new lows with very tight stops.

UGAZ has net assets of $886.71 million, trades an average of 3.5 million shares, and charges a 1.65% expense ratio. The fund summary for UGAZ states:

The investment seeks to replicate, net of expenses, three times the performance of the S&P GSCI Natural Gas Index ER. The index comprises futures contracts on a single commodity and is calculated according to the methodology of the S&P GSCI Index.

UGAZ’s value will evaporate if the price of natural gas continues to slide or remains below the $2 level. Another reverse split is likely as time decay eats away at the triple leveraged ETN product.

The United States Natural Gas Fund has net assets of $437.8 million and trades an average of over 4.7 million shares each day. The ETF charges a 1.28% expense ratio. The fund summary for UNG states:

The investment seeks to reflect the daily changes in percentage terms of the price of natural gas delivered at the Henry Hub, Louisiana, as measured by the daily changes in the price of a specified short-term futures contract. The fund invests primarily in futures contracts for natural gas that are traded on the NYMEX, ICE Futures Europe and ICE Futures U.S. (together, ICE Futures) or other U.S. and foreign exchanges. The Benchmark Futures Contract is the futures contract on natural gas as traded on the New York Mercantile Exchange that is the near month contract to expire, except when the near month contract is within two weeks of expiration.

The current top holdings of UNG include: 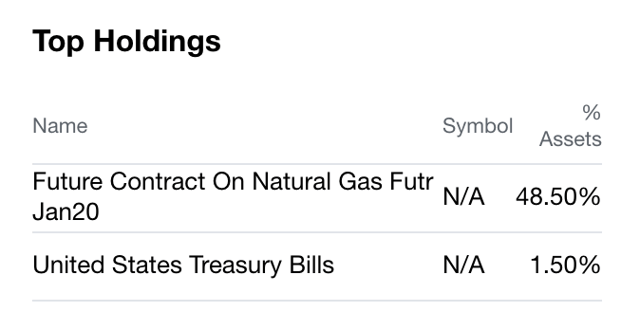 The lack of leverage in UNG makes it a safer product for those looking to pick a bottom in natural gas, but the upside rewards will be far less than UGAZ offers if the price recovers.

I am not bullish on natural gas and expect the price to move lower. The price action continues to be sloppy and ugly, and a move to below the $1.60 level is possible. However, eventually, the price will recover when the bears overstay their welcome, and the historically volatile commodity looks to pick their pockets.

Natural gas has a lot going against it these days including, high inventories, less demand during this winter season, and a bearish price trend. “It’s always darkest before the dawn,” but in natural gas, the dawn could still be a few months away.