Source: YCharts – Netflix Inc. has seen its share price stagnate over the past couple of years as rising competitive pressures start to appear, particularly in the US.

On January 21, streaming giant Netflix, Inc. (NFLX) reported fourth quarter earnings for 2019 that underwhelmed the market. Shares of NFLX sold off the next trading day as investors priced in rising domestic competition and the long road ahead until Netflix starts generating positive free cash flows. We remain cautiously optimistic that Netflix will be able to generate positive free cash flows within a few years, as we’ll cover in this piece, and the midpoint of our fair value range estimate sits at $291 per share of NFLX. Should Netflix outperform the expectations provided in the graphic below, shares of NFLX could test the upper end of our fair value range estimate, which sits at $393 per share. 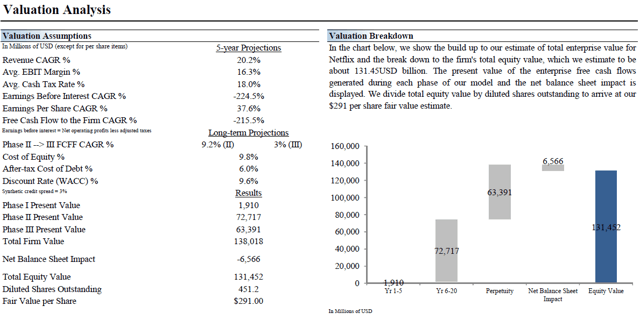 Please note these expectations are for our base-case scenario, and under more optimistic assumptions, the intrinsic value of shares of NFLX would be higher.

The graphic below provides a visual representation of our models covering Netflix’s future financial performance over in the mid-2020s. Please note we see Netflix’s forecasted operating cash flows sharply rebounding over the coming years, as a combination of its ever-growing subscriber bases combines with the powerful uplift pricing increases offers to enable positive operating cash flows to emerge by 2021 or 2022. It would take until 2022, at the earliest, in our view, for Netflix to start churning out meaningful free cash flows; however, from there, the sky’s the limit. That said, please note there’s an enormous amount of room for variability here including the rate of growth in original content spend, subscriber growth, and the pace of future price increases. 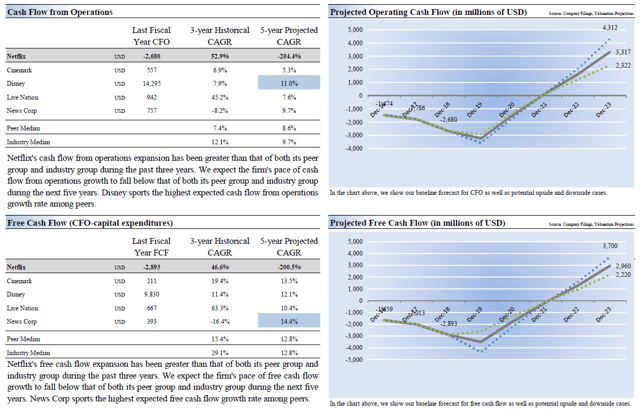 The Walt Disney Company (NYSE:DIS) recently launched its namesake Disney+ streaming service, and also owns a ~67% stake in Hulu (alongside Comcast Corporation (NASDAQ:CMCSA), which owns the remainder); Apple Inc. (NASDAQ:AAPL) has unveiled its new Apple TV+ service; and now Comcast is announcing its soon to be launched Peacock streaming service will be very competitively priced. Even with all that competition, Netflix was still able to grow its paid domestic subscriber base in the fourth quarter of last year on a sequential and year-over-year basis.

Competition is only expected to heat up, with AT&T (T) getting ready to launch its (more premium tier oriented) HBO Max streaming service (building on the immense popularity of HBO and HBO Go) this year. For now, most of this competitive pressure is directed towards the US and Canadian markets, but it will be very important to see how things progress over the coming years. Rising competitive threats do more than just put pressure on Netflix’s ability to grow its subscriber base, it limits the firm’s potential pricing power (seen through uneven price increases over the years, particularly in the US).

It will be tough for companies that have a strong hand to play in the US and Canada to try and leverage that successful content elsewhere to the same effect without investing heavily in international original content when faced with the language and cultural barriers that often arise in the entertainment space. Some firms, like Disney, have been able to do so to great effect and others have not. In other words, please keep in mind that success in North America doesn’t necessarily translate into success elsewhere (again, save for Disney), which is why Netflix has been pouring a lot more capital into creating more original content for international audiences (that includes more non-English language content and content with non-America/Canadian/Western European cultural references).

Netflix exited 2019 with $5.0 billion in cash on hand, providing for enough funds to keep the lights on for the time being without having to tap capital markets right away. With $14.8 billion in long-term debt and negative net operating cash flows, Netflix still remains very capital market dependent to both cover its medium-term needs and to refinance its existing debt burden (meaning Netflix will at some point need to tap capital markets again and any appearance that Netflix won’t be able to tap capital markets at attractive rates could have profound implications for its share price and overall operations). However, it has some breathing room, and debt and equity markets appear quite open to future potential issuances from Netflix, as of this writing.

We forecast Netflix’s net operating free cash flows should rebound materially over the next few fiscal years, allowing for decent free cash flow generation to potentially begin by 2022. A lot depends on how Netflix plans to proceed with its monstrous original content investments and the case of its subscriber growth. Price increases are an essential way for Netflix to eventually generate positive net operating cash flow, which needs to be balanced out against the need for greater revenues with the need to grow its subscriber base to allow for greater revenues down the road. Netflix has successfully pushed through price increases in the US and elsewhere (including Latin America, Western Europe, and even select Middle Eastern markets like Israel) and is aware of how to manage such a maneuver while maintaining its large existing paying subscriber base.

The streaming wars are only just beginning, and those that are left at the table when it’s all said and done could generate quite sizable free cash flows. However, we caution that the space is viciously competitive, and in order to win, Netflix will need to stay ahead of the curve not just in America but around the world. Management noted that Netflix experienced “elevated churn in the US from a combination of pricing and competition” during the company’s latest quarterly conference call, something that needs to be closely monitored going forward.

Additional disclosure: This article or report and any links within are for information purposes only and should not be considered a solicitation to buy or sell any security. Valuentum is not responsible for any errors or omissions or for results obtained from the use of this article and accepts no liability for how readers may choose to utilize the content. Assumptions, opinions, and estimates are based on our judgment as of the date of the article and are subject to change without notice. The Walt Disney Co. (DIS) is included in Valuentum’s simulated Best Ideas Newsletter portfolio. AT&T Inc. (T) is included in Valuentum’s simulated High Yield Dividend Newsletter portfolio.